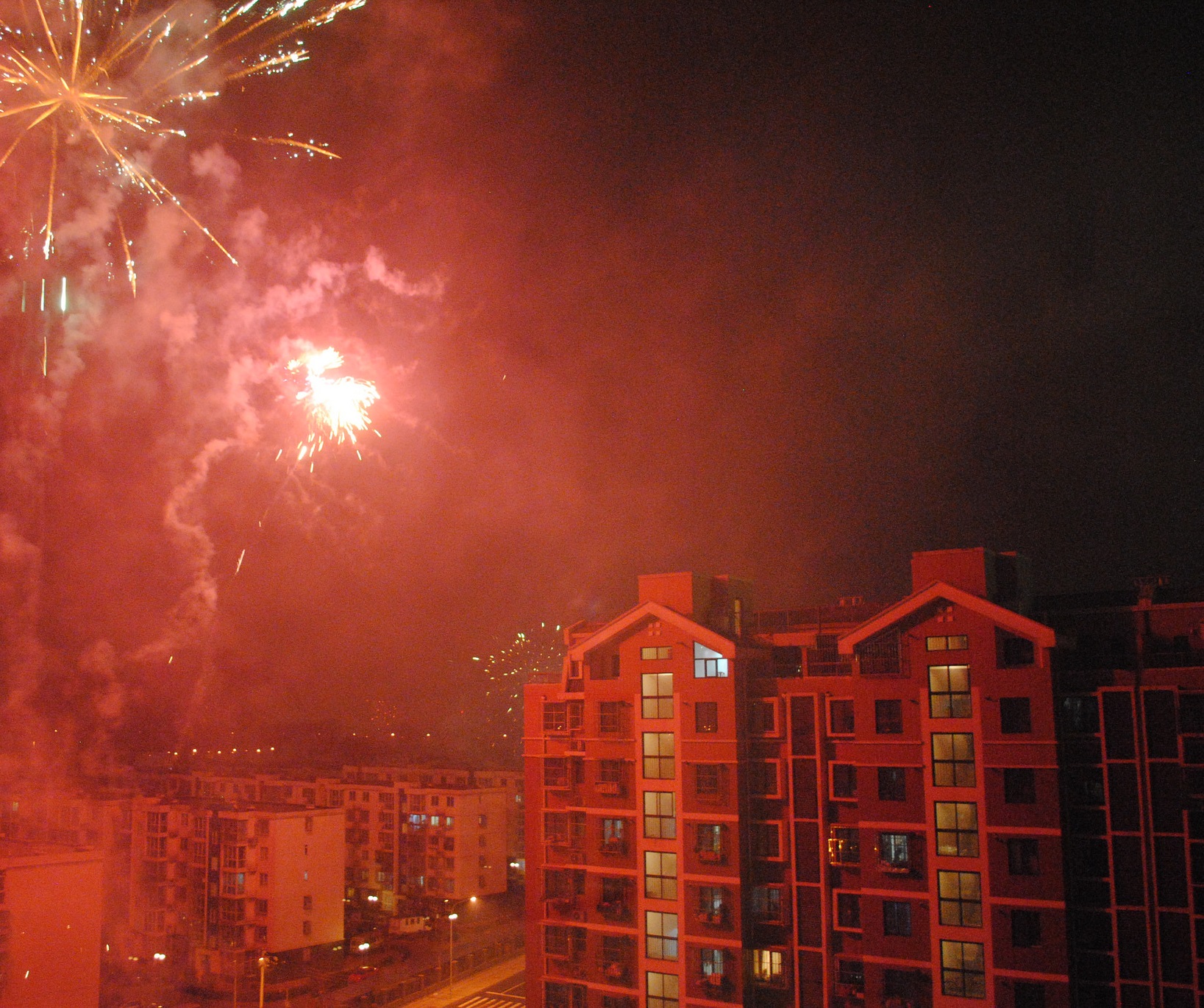 It is a tradition in China for the people to light fireworks for New Year’s at midnight. It’s genesis is to scare off evil spirits to bode for a prosperous new year. Our neighborhood is Kangying Jiayuan, Chaoyangqu, Beijing, which is just outside the 5th Ring Road. We had quite an opera box view, overlooking the show from our 10th floor windows. Based on this year’s performance, I’m not too worried about bad vibes affecting our community in 2015!

As you can see, it’s spontaneous Armageddon. Just a bunch of homeys out having a good time. The cars driving around them are funny, like going through a war zone. We have done that in other years, ourselves. You can hear car alarms going off, that are triggered by all the explosions. You can also make out the guys on the streets, milling around and lighting their various batteries of fireworks.

Remember, our fair burg has 20 million souls. So, just behind our buildings are more neighbors and more neighborhoods, all having a grand old time, across the kilometers. This of course is being repeated many millions of times in megalopolises, cities, towns and villages, all across this continent sized country. These are not bottle rockets, Black Cat firecrackers and sparklers, but sophisticated fireworks that are rarely seen in the people’s hands in Europe and North America.

There is nothing quite like it the world and given the joy, spontaneity and chaos that ensues, I’ll take it over a computer controlled, orchestrated, quarter million dollar/euro show, any night. Pop up some popcorn, break out your favorite beverage, turn up the sound, put both clips on full screen and enjoy…

Please note there is a shopping center being constructed below our block on the north side, which is why it is so dark in the foreground.

I thought it as all over, when I saw my wife standing in the south window, went onto the terrace and it just kept on going, up close and personal, for another 30 minutes! I stopped filming after nearly 13 minutes. In this one, you can see huge chains of firecrackers being lit on the ground. They are usually between 5,000 and 50,000 long, and much more powerful than the usual firecrackers in the West.

If you would like to see some still photos from last year’s display, go to my Flickr site: https://www.flickr.com/photos/98158626@N07/

Happy New Year of the Ram, 2015, from the belly of the New Century Beast,