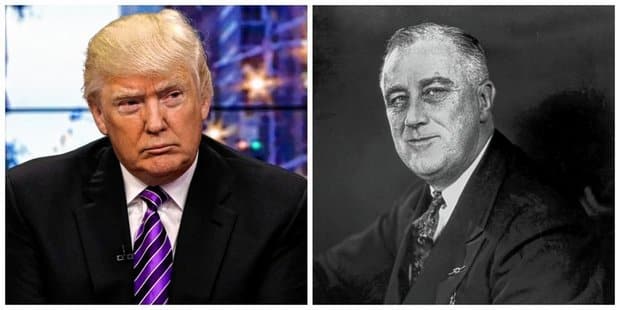 Pictured above: Trump and Roosevelt: two peas in a pod?

For the record, I voted for Donald Trump. Not that I was in love with the guy. It was really a matter of default. On the Oklahoma state ballot, I had the choice of Hillary “Crimes Against Humanity + Here Comes World War III” Clinton, the Libertarian candidate Gary Johnson and Mr. Trump. I chose Trump, a populist, sometimes demagogue and buffoon, but a real outsider who might shake the establishment up.

It is still early, but no one can say that the first two weeks of Trump’s administration have been boring or predictable. He loudly called the outgoing CIA director, John Brennan, a liar and said that the agency’s Russia dossier was all fake news. John F. Kennedy said just as much in private and paid the ultimate price for his honesty. Trump has apparently kept on his own private security services, since getting elected, to avoid the same fate as JFK.

President Trump cancelled the Transpacific Partnership (TPP), which was bad for everybody involved, except the transnational corporations who bribed, extorted and blackmailed some Pac Rim countries into signing on. But even America’s corporate owned Senate and Congress were resisting. Why? Because a signatory country gives up its national sovereignty to a corporate picked “international arbitration commission”.

Under the TPP, any company can take any country’s laws to this “unbiased” group of corporate jocks and claim that they are an “infringement on trade”. Think GMOs, agricultural chemicals, cultural and religious laws, subsidies to promote national industries and infrastructure; media and internet regulations; medicine and social security; environmental, worker and civilian safety laws, taxation, and on and on. Once this unelected, corporate board rules against any and all national laws, then the signatory country’s legislature is required to abolish those law and regulations, in the name of “free trade”.

So, Mr. Trump, thank you cancelling this Orwellian, plutocratic, corporatocracy. I can assure you, Baba Beijing wants nothing to do with it. China’s leaders want to govern and help their people, not be tyrannized and humiliated by faceless transnational corporations.

I watched Trump’s inauguration day speech. I also watched Trump’s press conference, with small and medium sized business owners, and in both cases, I was amazed at the similarities between him and President Franklin Delano Roosevelt (1933-1945).

The first observation that really struck me is how much Trump genuinely cares about “the little guy”. It’s not phony. He really does want to help the people in America who have been disenfranchised from having a voice in their destiny, something that has been building up for quite a long time. FDR was just as sincere about helping all the millions of hungry, homeless and jobless Americans, during the Great Depression. The US had to wait eight years after the Great Financial Crash of 2008, also known as the Great Middle Class Gang Bang, for populist Trump to ride to the rescue.

Both presidents came from wealthy backgrounds, with the proverbial silver spoon in their mouths. FDR’s family made its fortune via the organized crime opium cartel in China, 1839-1949. Trump’s father was a big construction, slum lord and real estate tycoon in New York City. He was investigated on numerous occasions for illegal business practices. You don’t succeed in these Big Apple business sectors and not be in the good graces of the Mafia.

Using his patrician family’s name, FDR worked his way up to the top of the American political system, to eventually become president. Donald Trump used his father’s wealth and connections to work his way up the corporate and media ladder, to eventually occupy the White House.

Both men are “rich, fat and happy”, to use the expression, and do not have to make all the sacrifices and take all the risks to run the United States, but both have their principles, ideas and visions for the future (For simplicity, I will use the present tense to compare both presidents, even though they lived generations apart).

Both men want to put Americans back to work again and reignite the country’s industrial potential.

Both men are disgusted with the usurious, rapacious, private Federal Reserve banking system. FDR complained bitterly about the Fed in his private writings and only obliquely so, in public. Trump is more vocal and seems less intimidated by the elite banking families, Rothschild, Rockefeller, Morgan, Carnegie & Co., the real owners of the United States and Europe. JFK was circumventing the Fed, by having the Treasury Department mint “silver certificate” bills outside the purvey of the Fed banks, another reason he lived a very short life. With his purported private security forces keeping him safe from the CIA, maybe Trump feels just as safe from the agency’s historical deep state partners, the aforementioned oil bankers.

Both men have a strong vision for what ails the country. For FDR, it was the New Deal. For Trump, it is “Put Americans First”.

Both men are despised by the elites. Both men are proud of it too. FDR famously said he welcomed the hatred of Wall Street. Trump has repeatedly threatened and is starting to act on his promise to “drain the swamp in Washington”.

Both men take the choice of Supreme Court justices very seriously and both have a chance to really change the political leanings on the bench. For FDR, it was to make the Supreme Court more liberal. For Trump, it will be to make it more socially conservative. Both believe their choices will be for the betterment of the citizens.

Both men know how relate to their constituencies, the man and woman on the street, the little guy and gal, Joe and Jane Sixpack. FDR ruled the radio waves with his famous “fireside chats”, bucking up the populace to work hard, stay positive and look forward to better times. Trump is a brilliant manager of the media and does not hesitate to take his populist message to his base, via social media, such as Twitter and Facebook. As a result, both presidents’ voters love them and are not hesitant to let everybody know this fact.

Conversely, both presidents have a big chunk of the electorate who despise them. For Trump, it is the wealthy elites and liberals. For FDR, it was these same elites, but the other group was middle America’s conservative and Christian block. So in essence, FDR and Trump have kept the wrath and indignation of the ruling Princes of Power, but have switched sides on Main Street, making a very interesting dynamic, for sure.

Both men talk about keeping America safe from external enemies. FDR ended up getting the US into World War II, ostensibly to do just that. The jury is still out on how aggressive Trump will be in dropping bombs and drones on thousands of innocent Muslims across the planet, in the name of fighting “Islamic terrorism”.

As a result of getting into World War II, FDR greatly increased the size and technology of the US military. Trump says he too, wants to greatly expand the military budget, and make it “unbeatable”.

Both presidents believe in Keynesian deficit spending, to boost the economy. FDR greatly expanded government programs to help the downtrodden, as well as turn the US into a war economy, with World War II. Trump wants to spend lavishly on the military and dramatically lower business taxes, just like a country at war, while going into even deeper debt than the already official $20 trillion void Americans are on the hook for.

Both FDR and Trump want to work with Russia. Roosevelt and Soviet leader Josef Stalin had a good working relationship together. Trump is signaling his desire to work on the positive side of the ledger, with Russian President Vladimir Putin.

In part due to his family’s historical role of “working” in China (in fact, selling illegal drugs), FDR had a fancy for this country. In his own way, he strived to make China a part of the postwar Western world order, but with all the historical colonialist, imperialist baggage in tow, he was doomed to fail. This is why a guy by the name of Mao Zedong came along with a better idea for his people. Trump has been all over the place with China, saying he wants to “cut a deal” with President Xi Jinping, while raising tariffs 45% across the board, but mixing in Taiwan and threatening to upturn the “One China Policy”, which if pushed to the extreme, could cause World War III. Here’s to hoping that Trump takes a fancy to the People’s Republic, like Roosevelt, but without all the “Great Game” imperial megalomania and cupidity.

These amazing corollaries between Presidents Franklin Delano Roosevelt and Donald Trump will surely grow, as Trump’s presidency takes root. It’s going to be an interesting next four to eight years, indeed. And dare I say, like my grandparents did during the 1930s, that it’s a time for hope? Soul brothers in a parallel universe…