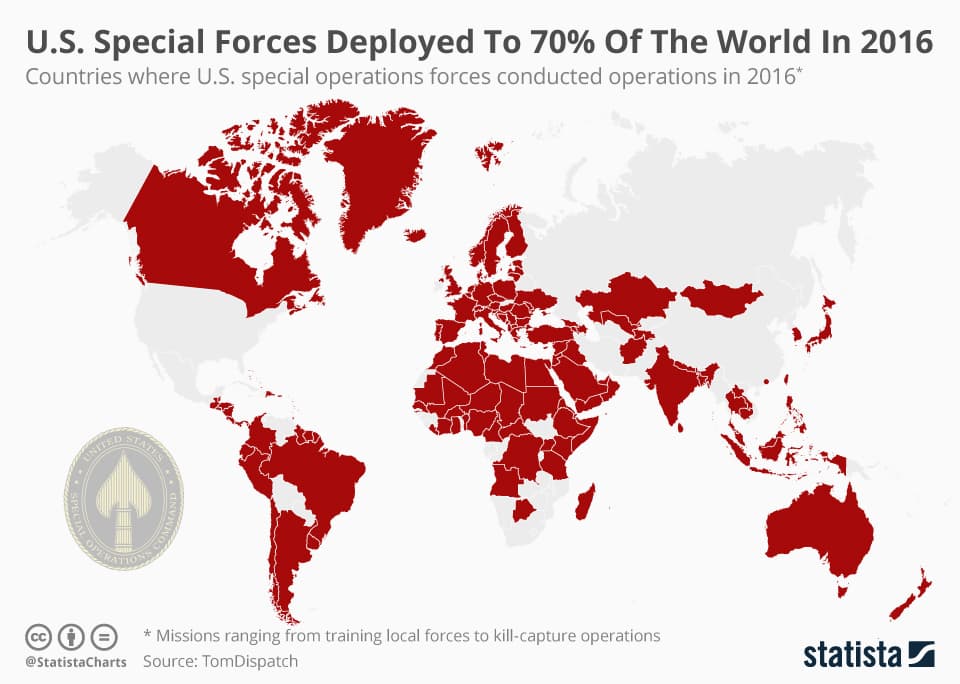 Pictured above: The President of the United States has over 130 special forces units at his direct disposal, 24-7, often called his “private armies”. Barak Obama was reportedly an aggressive user of this lethal imperial power, especially in Africa, with an average of 1.5 attacks conducted on the continent every day, over 500 per year. Will President Trump keep up the pace? (Image by TomDispatch)


A reader, Mr. Mike Faulkner, posted a comment about the article I recently wrote, Gag a maggot – people’s misplaced concerns for refugees and Muslim travelers. China Rising Radio Sinoland 170211 http://chinarising.puntopress.com/2017/02/11/gag-a-maggot-peoples-misplaced-concerns-for-refugees-and-muslim-travelers-china-rising-radio-sinoland-170211/. What he wrote was valid and thoughtful, and the subject at hand so important in world affairs, that I felt a respectful follow up article was needed, instead of a reply in the comments section, which almost nobody would see.

A couple of questions Jeff.

I actually don’t approve of Trump’s travel ban. I think’s it’s pretty useless, to be honest. But, as I wrote in a recent article, The Uncanny Similarities between Presidents Donald Trump and Franklin Delano Roosevelt, China Rising Radio Sinoland 170202 http://chinarising.puntopress.com/2017/02/02/the-uncanny-similarities-between-presidents-donald-trump-and-franklin-delano-roosevelt-china-rising-radio-sinoland-170202/, I have to give President Trump his chops for sincerely caring about his citizens and his commitment to honor his campaign pledges. Remember the incredible list of promises that Barak Obama made on the campaign trail in 2008, which was almost Adlai Stevenson-esque in idealism? How many of those pledges did he live up to? Almost zilch. Thus, the travel ban is Trump’s way of satisfying his promise to “keep Americans safe from Islamic (sic) terrorism”. For him and his team, it may be a valid way to control bad guys from entering America. For me, it’s mostly imagery in its effectiveness, but image counts for everything in popular politics. Plus, the hysterical response from all the Trump haters around the world only solidifies the street cred among his base battling against the Washington swamp. Thus, seen from the Oval Office, the travel ban is win-win.

Why Trump’s team chose these seven particular countries seems fairly clear. They are all enemies of the imperial West. Mr. Faulkner pointed out that Trump has business interests in confirmed terrorism-supporting countries, like the Gulf States, Egypt and Turkey, and it is very possible that this was a consideration to not include them. As is the case in Jurassic politics, enemies tend to get the axe, not allies. So, Mr. Faulkner’s observation has merit.

Mr. Faulkner’s second point is really thought provoking and needs to be fleshed out. First, I was brainwashed by Western propaganda for most of the first 55 years of my life. The scales falling off my eyes really didn’t happen until I came back to China the second time, in 2010. This journey of denial, discovery, disillusionment, disgust and finally acceptance is described in the prologue of my last book, China Rising – Capitalist Roads, Socialist Destinations, and can be read online: http://chinarising.puntopress.com/china-rising-the-book/. Thus, being a now enlightened former dupe, the many of the millions of people protesting against Trump, who are still brainwashed, make me empathetic, but also angry.

Having digested Mr. Faulkner’s comments, maybe a fairer appellation than dupe might be victim, since they are blind to how they are being manipulated.

Nobody wants to admit they are being used or taken for a ride, which is why it took me years to finally cross the Rubicon to the truth about the real West, historical and present. We Westerners all want to cling to our myths and historical fiction, cultivated at birth, from kindergarten, through high school, university and in to our adult lives, by a well-organized tsunami of relentless propaganda, both state and commercial.

I have talked to people from Hong Kong, asking them if they think the people protesting there are being manipulated by foreigners, and almost none of them would admit it; a few were offended. Yet, the evidence of CIA-NGO direction and funding of all the subversive hullabaloo going on in this Chinese Special Administrative Region is overwhelming and conclusive.

Thus, having seen the light, so to speak, when I know that many millions of privileged Westerners have not, is cause for my frustration and impatience with these fellow citizens, which was laid bare in the Gag a Maggot article. At the same time, my intemperance was also undoubtedly due to knowing that just a decade ago, I would have probably been right there with them, incensed that Muslims, the ones who the West has not already massacred, cannot travel to the United States, with the inconvenient irony subconsciously ignored. This exposes the incredible power that our government and corporate media propaganda has over our lives, getting us to accept the most preposterous, cruel and criminal contradictions. Westerners breezily compartmentalize their imperial and colonial place in the world. We rationalize grotesque exploitation of humanity’s weakest and the extraction of their human and natural resources, which are the foundation of our stolen wealth. Unfortunately, our accepted cognitive dissonance is costing many of the world’s dark skinned people millions of innocent lives lost every year, genocide in fact – as normal, acceptable, even righteous.

Mr. Faulkner is right. It is too easy to generalize. There are surely many people who dislike Trump as a person, president, or his policies and positions, above and beyond the mainstream propaganda that saturates the airwaves and printing presses. Conversely, there are many people who sincerely admire Trump and support his administration, regardless of all the fake news raining down on them. There is also a growing number of Westerners who “get it” and reject all the brainwashing they have been and continue to be subjected to. For the sake of humanity and Mother Earth, may the numbers of all these free-thinking citizens grow exponentially.

Thanks again to Mr. Faulkner for getting me to think, reflect and write.

The buck stops with YOU. If you don't share this, who will?
Categories: 44 Days Backpacking in China book, Deep State, Jeff J. Brown, Radio Sinoland, US Empire
| Tags: Barak Obama, Donald Trump