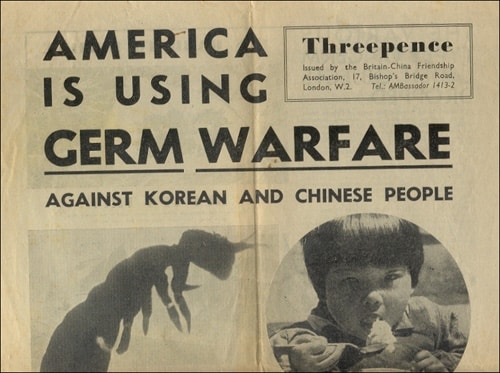 Pictured above: British-China Friendship 1950s photo by Andrew Burgin ⓒ2006 Robert Neff Collection. The evidence is overwhelming, in spite of the detailed 1952 UN report being censored in the West into non-existence. Only one copy is known to still exist and it has not been shown to the public. What is everybody afraid of? The truth: https://www.upi.com/Top_News/World-News/2015/06/09/Report-claiming-biological-weapons-deployed-in-Korea-up-for-auction/9861433861216/


In an amazing turn of events, the Japanese have made it official – Imperial Japan massacred thousands of colonial and conquered subjects, using bio- and chemical weapons during World War II. The timing of this admission seems like planned karma. Right wing nationalist Prime Minister Shinzo Abe just made a cash donation to the Yasukuni Shrine, the country’s official apology for its many crimes against humanity during WWII. A cemetery, it houses the tombs of 1,068 convicted war criminals, including 14 who were judged to be A-Class, the evilest of them all. Every year since the end of WWII, the current Japanese prime minister is expected to go to Yasukuni Shrine, to honor Japan’s war dead, which is also a huge expiation for the country’s unrepentant nationalists and fascists, not to mention the amnesiac conscience of an entire people.

At the same time, Japanese Public Television (NHK) showed a 49-minute documentary, translated as “The Truth about Unit 731’s Elite Practitioners and Their Human Trials” https://www.youtube.com/watch?v=ysapEl0xFOg. So far, it is subtitled in Japanese and Chinese only, but will hopefully add English ones soon. The Global Times gives a solid background until then http://www.globaltimes.cn/content/1061879.shtml.

If the above documentary was a boxer’s stunning left hook, it was immediately followed by a powerful knockout punch. Tokyo Broadcasting System (TBS) just showed on Japanese national television another soul searching, gut wrenching documentary. This one reveals the long denied truth about the island of Okunoshima, where thousands of people worked day and night to produce untold tons of chemical weapons, for the Japanese Imperial Army to use during WWII http://www.globaltimes.cn/content/1061987.shtml. These chemical weapons were also used in Unit 731, for human experiments. Like Unit 731, the Japanese army turned Okunoshima into rubble, to bury all the physical evidence.

For 77 years, Japan officially denied the existence of Unit 731 and Okunoshima’s nerve gas factories – grotesque and barbaric crimes against humanity, each and every one. Better late than never and the Japanese people should be commended for doing so. Such heinous policies can never have a statute of limitations. As China Rising Radio Sinoland host Jeff J. Brown discussed recently with Tom Powell, when are the United States and the West going to come clean about America’s flagrant used of Unit 731’s adopted technology, to wage bioweapon war on the North Koreans and Chinese, during the Korean War http://chinarising.puntopress.com/2017/07/29/americas-big-lie-about-bioweapon-crimes-in-korea-tom-powell-on-china-rising-radio-sinoland-170729/?

The difference is that America and NATO look upon themselves as the moral, righteous victors of WWII, intentionally ignoring the much greater sacrifices of the Chinese and Russian people. These latter died by the tens of millions to defeat global fascism. In any case, Japan and Germany are expected to flagellate themselves as losers in the face of the West’s “noble cause”. As such, Eurangloland continues to be the dominate global empire, and thus exonerates itself from any scrutiny. This, in spite of the hundreds of millions – Indian historian Dharampal calculated it at over one billion – of mostly dark skinned people it has exterminated across the planet, since the 15th century, and ongoing in Syria, Libya, Iraq, Afghanistan, Yemen (by proxy), Palestine, and the list of victims never stops.

Come on Uncle Sam and the American people. The Japanese have done the right thing. Better late than never, right? Now it’s your turn to come clean, even though you are an arrogant global imperial power, be damned!

5 thoughts on “Japan admits bio- and chemical weapons use in WWII. When will the US come clean? China Rising Radio Sinoland 20170819”