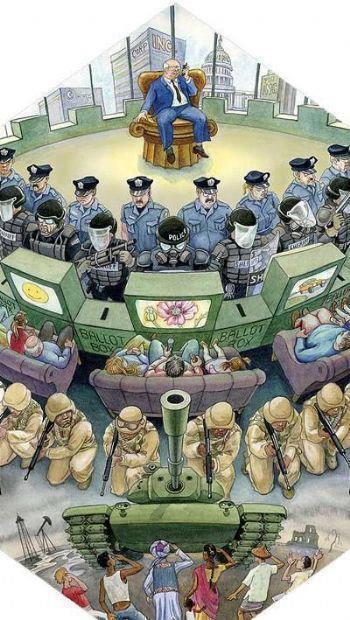 Above: the West’s capitalist dictatorship, getting worse and worse by the day for the 99% (https://videosenglish.telesurtv.net/video/693817/the-american-dream-is-turning-into-a-nightmare/).

Merry Christmas to all the China Rising Radio Sinoland fans who celebrate the occasion.

Readers of The China Trilogy (see below), especially Book #2, China Rising- Capitalist Roads, Socialist Destinations, already know that the West is a democracy in name and myth only. Below are several articles, with hyperlinks and references supporting all the evidence I presented.

In a lengthier version of the same article (http://www.informationclearinghouse.info/48487.htm), Eric talks about NATO’s secret Gladio Armies making a mockery of Western democracy. You may notice in the text box on this website about what I recommend to read, that Danièle Ganser’s book is listed:

As well Douglas Valentines’s book on the CIA as organized crime, https://www.counterpunch.org/2017/09/22/the-cia-70-years-of-organized-crime/

I took a lot of criticism for front loading China Rising with a full exposé of the West, its myths and propaganda, the experience about which I recently wrote: http://chinarising.puntopress.com/2017/12/14/sometimes-we-just-need-a-good-laugh-your-commie-horoscope-on-china-rising-radio-sinoland-171214/

However, like me, you will learn that you simply cannot understand a country like China, until you first know how the West really works, as ugly and disappointing as it all is, hidden behind its fog horn of withering propaganda and racist superiority. As The China Trilogy clearly shows, it is the Chinese who have real, vibrant, representative democracy that works for and responds to their needs, day in and day out.

It took me five years and thousands and thousands of hours of research and reading to realize the truth. Hopefully, I can help you short circuit your journey of discovery. Life is too short to live in brainwashed ignorance.

Enjoy, learn and discuss. Sharing is caring. Please tell your family, friends and colleagues about China Rising Radio Sinoland (www.chinarising.puntopress.com) and post, share and follow it on all your social media.