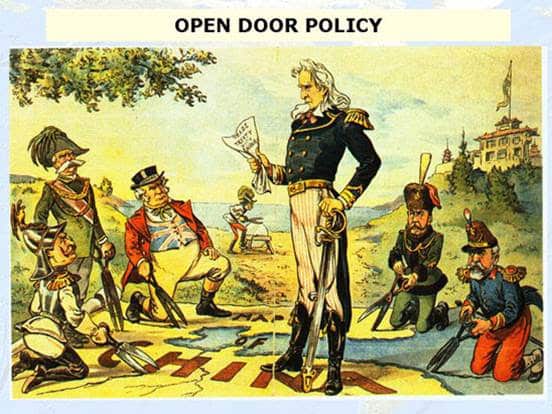 Pictured above: since China’s 1949 communist revolution, long gone are the days when the US and Western Europe raped and pillaged China, like during the preceding 110 years, what the Chinese call “their century of humiliation”. Westerners conveniently gloss over their sordid history. The Chinese will never forget. (Image by jeaninepoliticalcartoons.blogspot.com)

Downloadable SoundCloud podcast (also at the bottom of this page), YouTube video, as well as being syndicated on iTunes, Stitcher Radio, RUvid and Ivoox (links below),
If you prefer a podcast version, you can listen to and download it here, or at the very bottom of this webpage. This a special “director’s cut” version, with Jeff’s and Mo’s pre-interview banter included, which has a lot of added insights. The actual interview starts at 23:19:


Political analyst, journalist and lecturer Jeff J. Brown was invited on the popular radio program, Wall St. to Main St., hosted by Mo Dawoud. In today’s interview, Jeff and Mo talk about a whole range of China hot button issues, such as gold, the economy, international finance, the RMB versus the dollar, US imperialism, how China is governed, why it is communist and not capitalist, and how communism works to its advantage over the capitalist West.