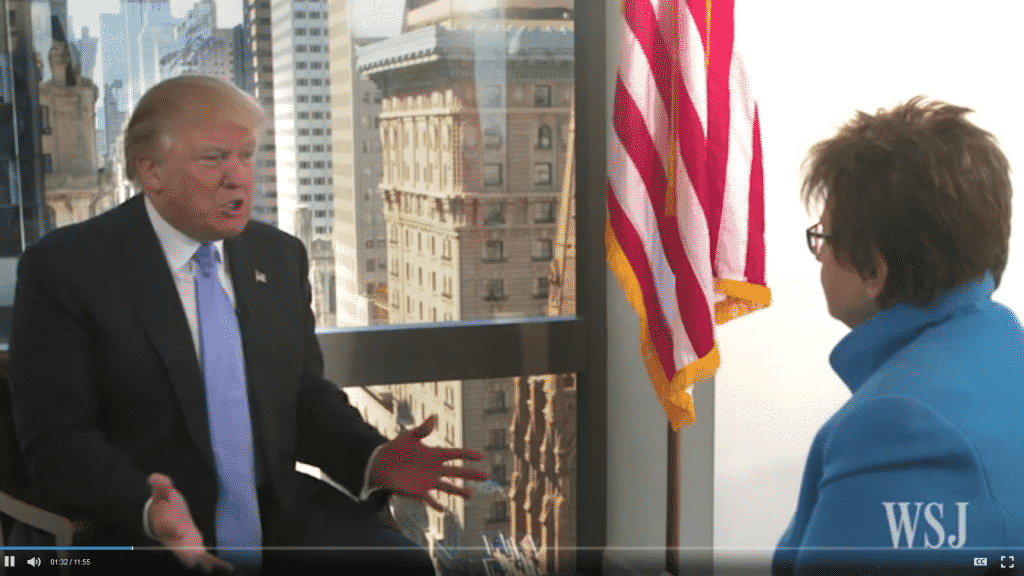 Pictured above: President-Elect Trump in an interview with the Wall Street Journal. So, who is it going to be Donald? Taiwan’s Tsai or the million American jobs proposed by Alibaba’s CEO, Jack Ma? ‘Cuz you can’t have both. (Image by Wall Street Journal)

Press TV invited China Rising Radio Sinoland author and political analyst Jeff J. Brown on their news show to talk about President-Elect Donald Trump’s interview with the Wall Street Journal this week, where Mr. Trump said that the 45-year old One China Policy will be used as a bargaining chip with Baba Beijing, to force trade and currency concessions. Trump’s heart and logic may be in the right place, to create jobs in the Heartland, but clearly, he and his team need a lesson in Chinese history and current geopolitics. Come to think of it, someone send Donald & Co. a copy of my book, China Rising – Capitalist Roads, Socialist Destinations (Link below). Then they’ll see why using Taiwan as a threat to the Mainland is absolutely delusional. Mr. Jack Ma presides over the world’s biggest online shopping website (Taobao) and payment platform (Alipay), dwarfing anything the West has for competition. Hopefully, Mr. Ma can explain the facts of life to Trump and his new team, about the internationally and American recognized One China Policy, vis-à-vis Taiwan. It’s untouchable. (Image by Baidu)