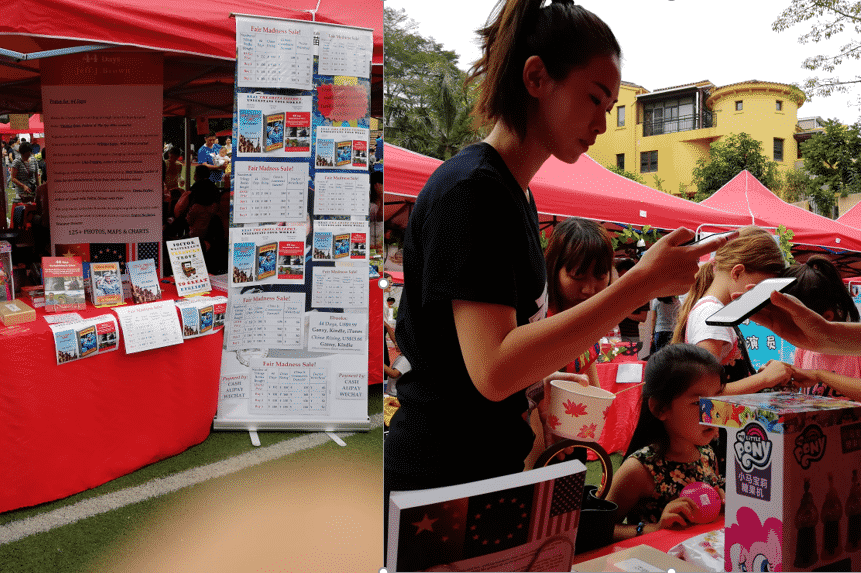 Above, on the left, is my charity fair stand in Shenzhen to sell The China Trilogy (http://chinarising.puntopress.com/2017/05/19/the-china-trilogy/) and my English language learning book, Doctor WriteRead (https://www.amazon.com/Doctor-WriteReads-Treasure-Trove-English/dp/150780072X/). There are always several of these seasonal bazaars for vendors to get together and help raise money for a good cause. It was a fun day and I always get to meet many interesting people, both Chinese and otherwise. Pictured on the right is my next door neighbor’s stand, getting her money via mobile telephone payment. I also accepted Alipay, Wechat and cash. More and more people are leaving the house in China with no cash on hand. The level of trust in the banks here is very high, since they are all owned by the people. There are no private banks in China (http://chinarising.puntopress.com/2017/08/17/baba-beijing-is-going-to-start-using-blockchain-technology-for-official-business-china-rising-radio-sinoland-170817/).

Wechat, Alipay and the banks take no fees for mobile payments less than ¥200 (about $25). This is why people can mobile pay $0.25 to rent a bike for an hour or $0.75 for a snack out of a vending machine and not get ripped off by transaction fees. That would never happen in the West, because the banks there are capitalist and rapacious, but I repeat myself. I suspect this is why Apple Pay has not gotten off the ground here. A Western bank could not imagine providing a free service tens of millions of times a day, and not picking the customers’ pockets.

[dropcap]A[/dropcap]s a follow-up to my article and podcast about China’s high tech revolution being fueled by its communist-socialist political-economic system (http://chinarising.puntopress.com/2017/10/25/how-can-western-capitalism-beat-this-thats-the-rub-it-cant-china-rising-radio-sinoland-171022/), today I am going to present a view of what it looks like in everyday life, on the streets and in the shops. The excellent video below is a perfect show and tell. The video is almost 25 minutes long and well worth the watch from start to finish. It is really hard to explain what mobile phone life is like here in China and this presentation does it in spades. I’m so inured to it on a daily basis, that I hardly even notice. Some cutting edge mobile tech I’m familiar with, but still don’t use much, such as live streaming, which this video also discusses.

After seeing it, I thought back to my visit to the United States this last summer, and what a shock it was compared to high flying China. Going back to America felt like getting out of a time machine in the 20th century (http://chinarising.puntopress.com/2017/08/26/china-is-the-most-plugged-in-big-economy-in-the-world-china-rising-radio-sinoland-170824/). This video reinforces that perception.

Enjoy, learn and discuss. Sharing is caring. Please tell your family, friends and colleagues about China Rising Radio Sinoland (www.chinarising.puntopress.com) and post it on all your social media. Read The China Trilogy, to understand your world & where you are headed into the 21st century (http://chinarising.puntopress.com/2017/05/19/the-china-trilogy/).

A Whirlwind Tour Through Tech Trends in China from Andreessen Horowitz on Vimeo.