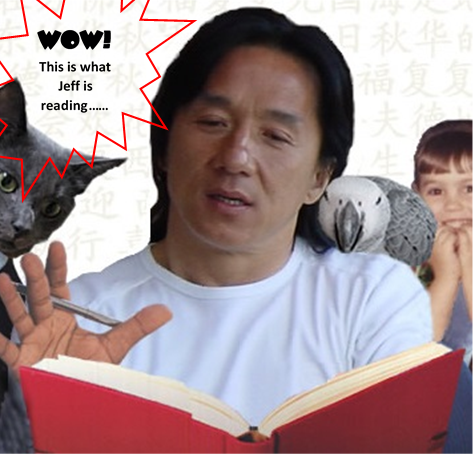 Pictured above: Jackie wants to know…

Many fans of China Rising Radio Sinoland send me recommended websites and articles to look at. I too am scouring the non-mainstream information realm for my research, book writing and journalism. These same people and others ask me what I am checking out. Herewith is a list of what I have looked at and researched recently. It will contain between 10-15 items, be continuously refreshed, with older posts dropped off, and kept near the top of the column page. The newest entry will be at the bottom of the list and working upward… Then read The China Trilogy, to understand your world & where you are heading into the 21st century:

We read about communist countries, like China, Cuba and North Korea. But in India, with popular voting, one state, Kerala, has been governed by the Communist Party of India (CPI) for decades. The results are in. Kerala has the highest literacy rate, life expectancy and Human Development Index in the country. Here is an article that explains Kerala’s long term success:

Whew! Frank Scott is on fire and on the mark in the brilliant smackdown of Western hypocrisy, perfidy and capitalism. I have been trying to get him on my radio show, but he humbly admits his old guy technical skills are not those of a plugged in, 16-year old geek. I think he would be wonderful to have on. Maybe leave him a comment suggesting just that:

Godfree Roberts has been on the China Rising Radio Sinoland show a number of times. He is witty, refreshing and deadly informed about how the way the world works. He will be publishing “China 2020 – Everything You Know Is Wrong”, in the coming months. This article is a excerpt from 2020:

Note: Godfree has been guest a record seven times to date on Jeff’s radio show, and there is a reason why. Every time he comes on is like a breath of fresh air and a big, contented smile. Herewith is the list. Take the time to listen  to them all. You will be glad you did:

John Pilger’s latest piece is excellent as usual. His writing hits the mark, because he usually makes it a testimony to his own life experiences. Not armchair critic, this man. As usual, The Greanville Post (TGP) does a masterful job of adding key information and visuals to the text. I am a senior editor and the China Correspondent for TGP, something for which I am very honored:

The killing of history

Mr. Gaither Stewart is a fellow editor of mine at The Greanville Post. We have also both published books with Punto Press. Here is his excellent, personal account of living and working in and around Iran and Afghanistan, during the critical late 1970s and 1980s, and how these two countries are much more married at the hip than the West will ever admit:

Godfree Roberts has written a wonderful piece on Mao Zedong. I wrote chapters about Mao in my two books, China Rising and China Is Communist Dammit! From my chapters, I was happy to offer a few of the statistics that he used in this article. Bravo, Godfree!

As a complement to Godfree’s great article, here is another angle to look at 20th century’s most influential world leader:

An excellent, and in my opinion, must read 7-part series on capitalism vs. socialism, from the viewpoint of the EU, by Press TV’s Paris correspondent, Ramin Mazaheri:

We’ve had 5,000 years of slavery, 2,000 years of feudalism, 500 years of imperial-colonial-capitalism, and it’s been a miserable, bitter, undignified eight millennia for the average global citizen. Time for socialism. The Anti-West, headed by China, Russia and Iran, are showing us the way.

Frank Scott is one of my fave anti-imperial writers. I interviewed him on China Rising Radio Sinoland (http://chinarising.puntopress.com/2017/09/14/the-sage-of-san-francisco-sounds-off-frank-scott-on-china-rising-radio-sinoland-170914/). He is funny and laser sharp in front of a microphone and with his pen. Here is a brilliant, satirical destruction of all the mainstream hubbub infecting the media these days. It’s all just eye candy, to keep your minds off of being fleeced by the West’ owners. It’s like a 24-hour news cycle three-card Monty. You lose every time you turn on the TV, radio or open up a page of propaganda. So, STOP!

The logic of a capitalist society. Externalize all the death, destruction and millions of brain damaged children onto the public. I wrote about this in the first book of The China Trilogy (http://chinarising.puntopress.com/2017/05/19/the-china-trilogy/), 44 Days (https://ganxy.com/i/88276). When scandals in communist-socialist China happen, like the lead poisoning crisis in the US, officials are executed or put away to do serious prison time. They pay the price. America is a lawless, criminal jungle and no citizen is safe:

I was so brainwashed for much of my life, growing up in the West, that even thinking that there might be something wrong with capitalism brought a Pavlovian response of revulsion. The following video is so on the mark, but Mr. Monbiot can’t call it what it really is: the psychopathic logic of capitalism. Instead of saying, “This government hates you and your country”, he should say, “Capitalism hates you and your country”. It can’t be fixed:

The insanity of nuclear weapons is brought into sharp contrast, with this free PDF book by Dr. John Scales Avery. Caviar liberals love to round on Donald Trump for threatening North Korea. But, let’s not forget it was Nobel War Prize winner Barracks O-Bomb-A who concurred with his Joint Chief of Staff bosses that printing and spending $1.2 TRILLION on upgrading America’s 5,000 nuclear bombs, enough death to kill humanity hundreds of times over, was essential for the American people – I mean Wall Street. As President Vladimir Putin said, the Russians kept their end of the bargain and got rid of their stockpiles of fissile materials, and the West paid them back with the destruction and radioactive poisoning of Serbia. Every treaty the West has signed is not worth the toilet paper they are signed on.

Here is an excellent, two-part look at John F. Kennedy’s murder by his own government. I wrote a detailed chapter about JFK’s official removal, in Book #2 of The China Trilogy (http://chinarising.puntopress.com/2017/05/19/the-china-trilogy/), China Rising: Capitalist Roads, Socialist Destinations (https://ganxy.com/i/113798/jeff-j-brown/china-rising-capitalist-roads-socialist-destinations)

All the below is true, but what “outraged liberals” cannot bring themselves to do (and maybe he does in his other works – if so, my apologies), is to tie this nightmare to the obvious root of the problem: capitalism. Nor can they admit that false flags are used like fear mongering catalysts to help achieve the same results. I was like him for about 20 years. Now I get it and am not afraid to say it.

Patrice Greanville has done some outstanding research to write this excellent article on the importance of Hollywood being used by the West’s owners, to keep the masses brainwashed and clueless.This piece covers the Korean War:

HOW HOLLYWOOD SOLD US THE (GOOD) KOREAN WAR

The buck stops with YOU. If you don't share this, who will?
Categories: Jeff J. Brown, Radio Sinoland
| Tags: Recommended Reading