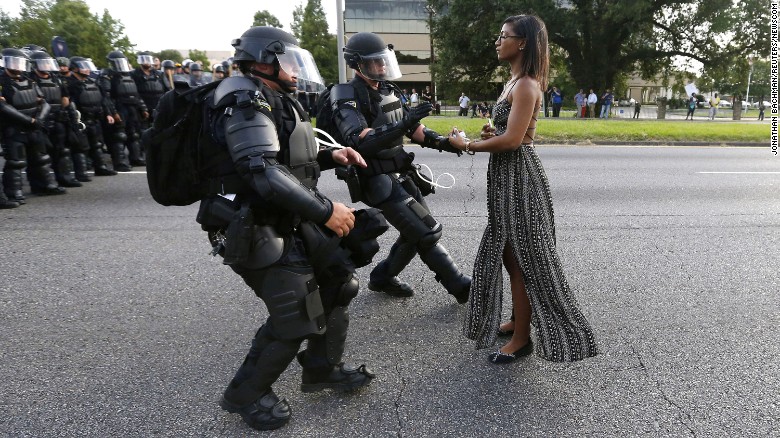 Pictured above, Occupy Wall Street protestor Ieshia Evans being arrested in Baton Rouge, Louisiana, USA. A very brave woman indeed. One of the main goals of the West’s Big Lie Propaganda Machine is to deflect onto global enemies the violence, brutality, criminality and corruption the elites are inflicting back home.

In my interview with James Bradley, he said point blank that Western media is state controlled, and he is absolutely right (http://chinarising.puntopress.com/2018/04/06/james-bradley-tells-it-like-it-is-on-china-rising-radio-sinoland-180406/). Euranglolanders are brainwashed from birth that theirs is a “free press”. It’s delusional. One can decide how far back this has been true, but we can safely start in the 1870s-1880s, when giant corporations formed as monopolies, trusts and conglomerates, amassed the money and influence to buy entire governments and media, from national to state/provincial, down to local levels. Making sure that the CIA and its fellow national spy agencies were put in place, totally above any laws or oversight, just made it official and more lethal.

European Nazis coined it as Big Lie Propaganda. It is now a global mirage used to keep the elites in power, ever richer and continuously successful at imperial-colonial capitalism’s Five E’s: expansionism, extermination, extraction, exploitation and evangelism, all rooted in psychopathic racism. This is something about which I have researched and written much (http://chinarising.puntopress.com/2018/01/06/slavs-and-the-yellow-peril-are-niggers-brutes-and-beasts-in-the-eyes-of-western-empire-china-rising-radio-sinoland/ and http://chinarising.puntopress.com/2017/11/10/all-the-chinese-people-want-is-respect-aretha-franklin-diplomacy-on-china-rising-radio-sinoland-171110/ and http://chinarising.puntopress.com/2016/11/05/the-dark-skinned-exploited-peoples-of-the-world-are-calling-the-west-for-what-it-is-racist-china-rising-radio-sinoland-161105/).

Below is the forensics of the Big Lie Propaganda Machine (BLPM) in action, keeping in mind that around the world, these kinds of coordinated fake attacks happen countless times a day. Just look at the headlines concerning Russia, Venezuela, Iran, Syria, China and on and on. Nothing reported in the mainstream media concerning Euranglolanders’ chosen bogey-demons can be believed. They truly live in a grotesque simulacrum, where almost everything reported is not real.

In this case, a Chinese “human rights” lawyer was involved. She is more than likely is a CIA stooge. Scratch ‘em and they are almost always connected to a Western NGO front, whose real mission is to create subversion, in the hopes of overthrowing the target country’s way of life. She made a big splash on Chinese social media platforms and in the international press, claiming that she had been beaten up and strip-searched by Chinese police (https://www.scmp.com/news/china/society/article/2168135/was-she-strip-searched-lawyer-mulls-action-against-chinese-police).

This kind of fake news is preplanned, premeditated and immediately circulated around the world via the West’s mainstream media, state-controlled ventriloquist dummies. It happens so fast and is so widespread, it doesn’t take a genius to see that the BLPM is very well coordinated and orchestrated.

It was of course at the top of Western internet search engines. CIA mouthpieces like the New York Times went into high gear with this false flag rag, which was meant to smear anti-Western capitalist, free and independent Baba Beijing. Let’s not forget that the BLPM is also used to deflect from the minds of Euranglolanders all the horrific police brutality and illegalities going on nonstop back home.

When the story broke, Guangdong Provincial Lawyers’ Association asked to see the camera footage of this woman being questioned by the police. It turns out that her claims were not true. She was not beaten up, nor strip-searched. All the police were guilty of was using foul language and having a bad attitude. Gee, how profound. Some cops had a stressful day.(https://www.scmp.com/news/china/society/article/2168427/chinese-legal-group-says-no-evidence-police-beat-and-strip). Within 12 hours, the South China Morning Post blasted out the original fake news and then published a retraction article, which is what responsible, credible journalism is supposed to do.

However, out West, the Big Lie could not die. Twenty-four hours after the original fake news media blast, Google was still flogging the bogus New York Times attack piece as a top read, when searching for strings like, “China police brutality woman lawyer”. At the same time, Google was not showing any information about the Chinese police being exonerated. BLPM’s Rule #1 is to stay on message and never say die.

Of course, the government-controlled New York Times continued to leave their fake news anti-China hit piece posted on its website. Always remember Rule #1. When readers began to report the fact that the article was incorrect and that the Chinese police had been exonerated, Rule #2 – gag and intimidate the public – was enforced. The NYT simply shut down the comment section, which you can see below. 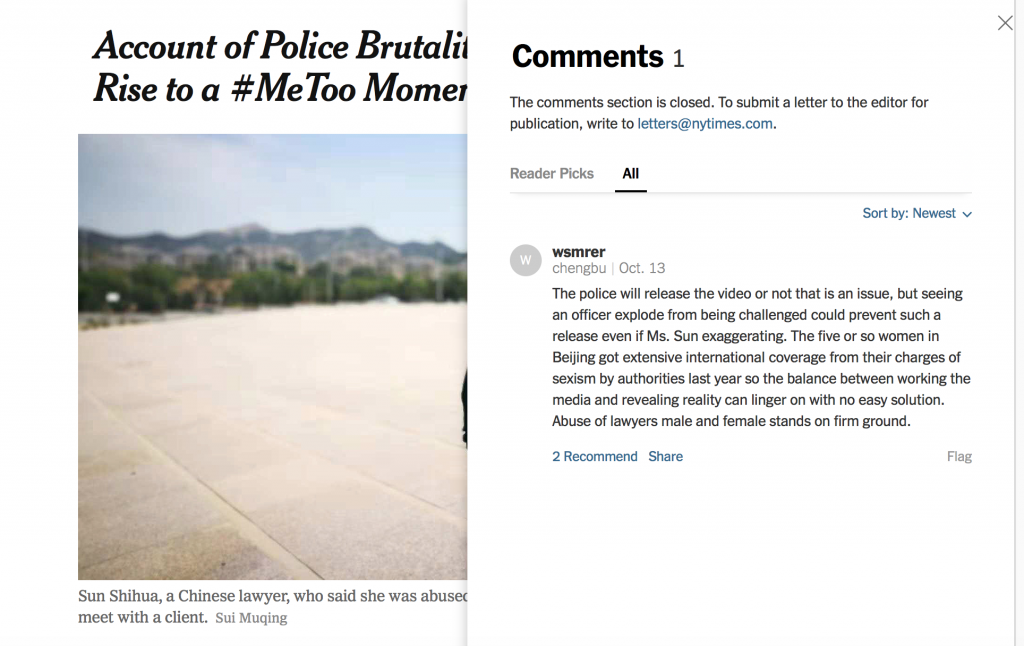 The West’s Potemkin “freedom and democracy” on display, in its Potemkin “free press”. When Euranglolanders’ owners are confronted with the truth, they quickly censor it and gag the public.

The next time you slip into brainwash mode and get all warm and fuzzy about the West’s ersatz “free press”, remember the above truthful account about how the mainstream’s BLPM really works. This was not some errant fluke. This is BLPM’s modus operandi, 24/7 at BBC, Fox, CNN, Guardian, Economist, Washington Post, ad nauseum. The left-right-center “positions” are simply a smokescreen to give you the illusion of choice, while you are getting robbed blind and driven into a dystopian, fascist police state.

Give me China’ very transparent, state-controlled media any day of the week. At least Baba Beijing is open and honest about its media ways and means, which is supported by the vast majority of the citizens. Is it any wonder that the Chinese have the world’s highest level of trust in the news they see and read every day? This is confirmed by an international survey (https://www.prweek.com/article/1383593/trust-china-rallied-last-years-drop-edelman).

Meanwhile, let’s give Americans credit for starting to catch on to the BLPM. In a national poll, only six percent of them said they had a lot of confidence in their media (https://www.businessinsider.com/ap-poll-just-6-percent-of-people-say-they-trust-the-media-2016-4).

Note:  many thanks to Patrice Greanville (www.greanvillepost.com) and Godfree Roberts (http://inpraiseofchina.com/) for suggesting that I write this article, while providing background information as well.