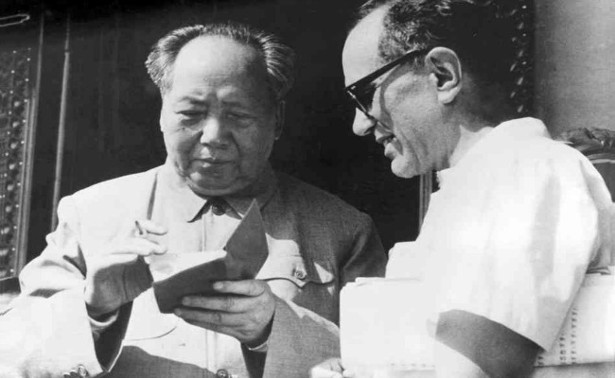 Pictured above: Sidney Rittenberg is a rare American who worked in the upper echelons of China’s pre- and post-liberation government. Here he is in 1966, with Mao Zedong autographing a copy of The Little Red Book.

In response to one of my posts, Peter Man, author of Heart of the Dragon- The Oracle (https://chinarising.puntopress.com/2018/11/14/book-review-heart-of-the-dragon-the-oracle-by-peter-man/), sent this wonderful story, and gave me permission to share it.

Sidney Rittenberg is an American journalist who went to China and decided to work for the communist revolution (https://en.m.wikipedia.org/wiki/Sidney_Rittenberg). He got very hands-on and involved in China’s anti-capitalist war of liberation and post-1949 development. Foreigners who get involved in local politics always skate on thin ice, because what they do can easily be construed as espionage. Sidney paid a price for being up to his neck living Chinese history, at the highest levels of government and Party authority.

From 1944 to 1980, while living and working in China, he was arrested twice and spent 16 years in prison, most of it in solitary confinement. In spite of severe hardships, he and countless others, including luminaries like Mao Zedong, Zhou Enlai, Deng Xiaoping and Xi Jinping, accepted that revolutions are always a messy business and mistakes are bound to happen. They relent and forgive, practicing the Buddhist-Daoist-Confucian concept of ren, a philosophy I recently explained (https://chinarising.puntopress.com/2018/12/17/selfishness-is-enshrined-in-western-culture-while-despised-in-chinese-and-indigenous-civilizations-china-rising-radio-sinoland-181217/). For these famous names and millions of other unsung, revolutionary heroes across history and around the planet, it’s all about ideals over individualism, the people and principles trumping the personal, and the message being more important than “me-myself-and-I”.

Here is what Peter learned about Rittenberg’s integrity and commitment to a higher cause,

The following is a true story. In 2005, I was introduced to a gentleman with a historical background in China. His name is Sidney Rittenberg. He is an American who had spent 38 years in China since 1944, 16 of which were in solitary confinement. Sidney said that he was invited to a foreign correspondent gathering in Beijing. They asked him to come, because they thought he would stand on their side in their campaign against China and the CPC (Communist Party of China). Sidney went and listened to how these foreign ‘journalists’ talked about their plans to smear China.

Sidney never blamed anyone for his being caught up in the turbulent currents of times past. On the other hand, he expressed disdain for these so-called foreign journalists. I learned something precious from Sidney that day, that the freedom of the Western press is really about their freedom to prevaricate, equivocate, and obfuscate. It’s hard to imagine that these minions don’t know their own bosses are directing and profiting from unending campaigns of torture and terror, while they kill, maim, and starve people around the world. Sidney even wondered aloud why these people were able to plot schemes in Beijing, right under the nose of the central government. After this, I would always read Western news reports with a grain of salt.

On the other hand, people who are biased from a lifetime of consuming bullshit will be happy to believe in any lie, as long as it reinforces their prejudice. It’s almost impossible to convince morons that they’re morons, or hypocrites that they’re hypocrites.

1-Here is a typical mainstream piece on Sidney Rittenberg. They had to say he “gave his life to Mao” so that he comes across as a brainwashed, fanatical groupie. This denies and denigrates Rittenberg’s lifelong commitment to working for communism, social justice and economic equality for the 99%.

2-A documentary about Sidney Rittenberg can be seen,

3-Sidney Rittenberg wrote a book about his lifetime of experiences in China, The Man Who Stayed Behind, 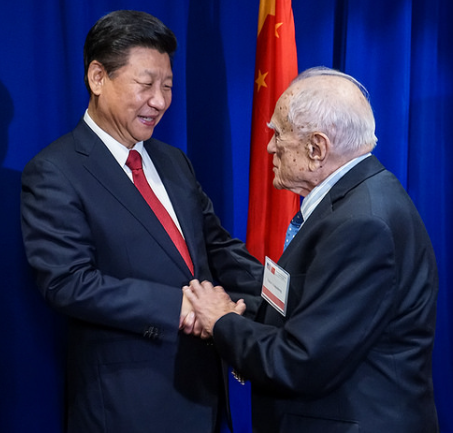 Sidney Rittenberg and Chinese President Xi Jinping had the mutual honor of meeting in Seattle, USA, in September 2015.