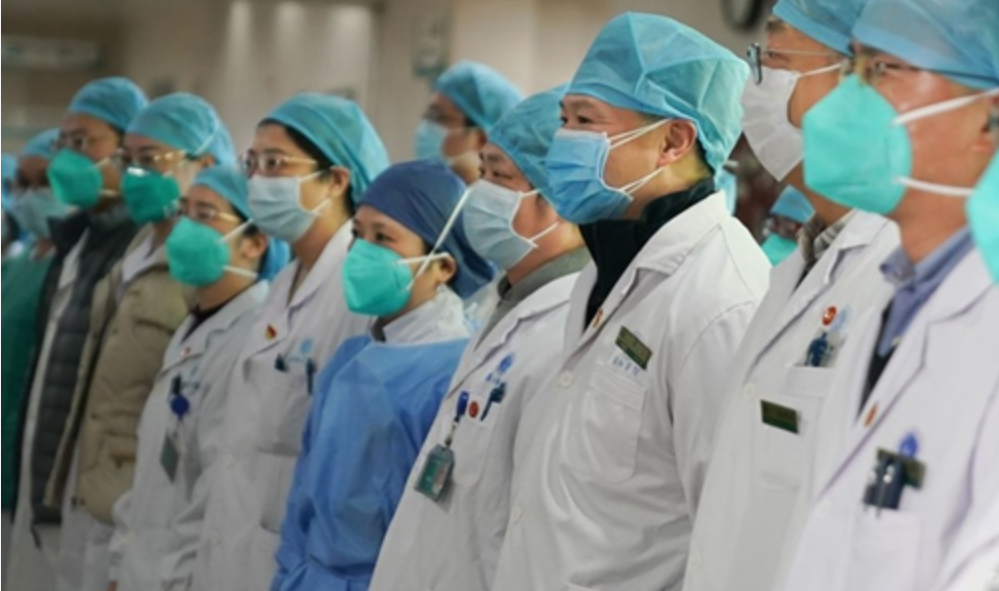 Pictured above: a medical assault team in Wuhan, China, organized to fight the flu discovered there. They, along with millions of other Chinese – citizens and professionals alike – are being mobilized to save as many lives as possible. This kind of concerted, national effort cannot happen in the West, because profits trump people.

As of 24 January, a grand total of 25 people in China have died from a new strain of flu being dubbed “Wuhan”, after the city where it started. A few days ago, when 17 had died, Chinese media reported that 16 of them were over 65 years of age and the 17th was 61. So, clearly, the elderly is the most at risk group. But, that’s the case for mutating flu viruses every winter.

Baba Beijing is taking unprecedented, anti-market, anti-capitalist measures to control it. Right at the peak of the busiest travel event in the history of the human race, Chinese New Year, Wuhan, a city of 11 million people has been quarantined and they just sealed three more nearby towns, bringing the total to 20 million residents. The magnitude of these public health measures is unprecedented in the history of the human race (https://futurism.com/neoscope/china-quarantines-three-cities-pandemic). The whole country is mobilizing to save as many lives as possible and Baba Beijing has warned all government officials and citizens to NOT suppress any evidence of the flu’s existence (https://thehill.com/changing-america/well-being/prevention-cures/479132-china-warns-against-cover-up-as-cases-of). This real time webpage in English is available in Mandarin for all Chinese citizens, so they can react accordingly (https://www.globaltimes.cn/content/1177737.shtml).

It is not just in Wuhan. Beijing and other cities have cancelled their New Year fairs and other public activities. China’s integrated, national rapid response is going to cost the economy billions of yuan/dollars. Try shutting down Paris, London or New York, all smaller than this midsized Chinese metropole. It will never happen, because too many moneymakers would not be able to make a profit. Western countries just let their people die. It’s called “free markets” and the cold-blooded “cost of doing business”.

Private companies are also showing solidarity in living up to Mao Zedong’s celebrated maxim, SERVE THE PEOPLE! Alibaba’s online retail platform, Taobao, announced that they would not allow vendors to gouge customers buying face masks, even offering subsidies, so everyone could be protected (https://www.globaltimes.cn/content/1177756.shtml). Get a load of that! In the West, the prices would go up many-fold, to exploit the people, making them unaffordable for the poor and those most in need, like the elderly on limited incomes.

Meanwhile, back at the capitalist slaughterhouse ranch, in the last two months, 6,600 Americans died like forgotten dogs from flu. You saw that number right: six-thousand-six hundred human beings in about 60 days. This is not some unhinged conspiracy theory, but is factually reported by the US Center for Disease Control (CDC- https://www.beckershospitalreview.com/quality/flu-has-killed-6-600-americans-cdc-estimates.html). In fact, every year, 12,000-79,000 Americans have shortened lives from the flu (https://www.pharmacytimes.com/resource-centers/flu/cdc-20182019-flu-season-the-longest-in-a-decade). Last year’s was particularly lethal, when 4,000 citizens were dying every week (https://en.m.wikipedia.org/wiki/2017%E2%80%9318_United_States_flu_season).

China, with 20% of the world’s people has nationwide, universal health care. Longevity continues to increase (https://www.chinadaily.com.cn/a/201905/23/WS5ce65408a3104842260bd68e.html). In the United States and the UK, the world’s neoliberal, capitalist dystopias, life expectancy is going down (https://www.businessinsider.com/us-life-expectancy-declined-for-third-year-in-a-row-2019-11 and https://www.nhs.uk/news/medical-practice/uk-life-expectancy-drops-while-other-western-countries-improve/). When my family was living in the US, 2001-2010, we couldn’t afford health insurance. Our policy was, Don’t get sick and if we get sick, don’t go the doctor. Otherwise, we’d leave the clinic with hundreds or thousands of dollars of inflated charges, and if we didn’t cough it up, they extorted us with a lien on our house or got a court order to garnish our paychecks. It’s perfectly legal gangsterism, euphemistically called, “business as usual”.

In any case, we also stood a good chance of getting killed by going, since 250,000 citizens die every year – not from a lack of medical care – but from negligent and corrupt intervention. Yankee doctors killing you is the third leading cause of death (https://www.cnbc.com/2018/02/22/medical-errors-third-leading-cause-of-death-in-america.html). It’s the American Dream Nightmare. The United States’ medical extraction industry is cruel, corrupt and criminal to the core. However, for hospitals, medical staff, insurance and pharmacy companies, profits are off the charts, which is the only benchmark of success in that part of the world.

Reflecting on the above facts, you have to hand it to the West’s Big Lie Propaganda Machine (BLPM). This hyperbolic, hysterical, deranged, foaming-at-the-mouth, rabid anti-China propaganda is the same Yellow-Nigger-Brute-Beast racism that has been going on for centuries. If you think I’m exaggerating, read the following exposé (http://chinarising.puntopress.com/2018/01/06/slavs-and-the-yellow-peril-are-niggers-brutes-and-beasts-in-the-eyes-of-western-empire-china-rising-radio-sinoland/). For the West’s oligarchs, all this orchestrated brainwashing brilliantly deflects from just how bad it is back home, when in the time it takes me to write, podcast and post this article, 100 Americans will have died of flu, without a prayer, by a government and economic system that couldn’t give a rat’s ass about their loss.

Mass hysteria, maniacal melodrama and BLPM brainwashing also keep you tuned in to sell lots and lots of ads. Friends, fans and followers of China Rising Radio Sinoland, I am sorry to say, but behind the Great Western Firewall, you are being played like an out of tune Chinese zither.

6 thoughts on “Flu score: US 6,600 dead. China: 25. The West’s hysterical, Yellow Peril racism is foaming at the mouth off the charts. China Rising Radio Sinoland 200124”