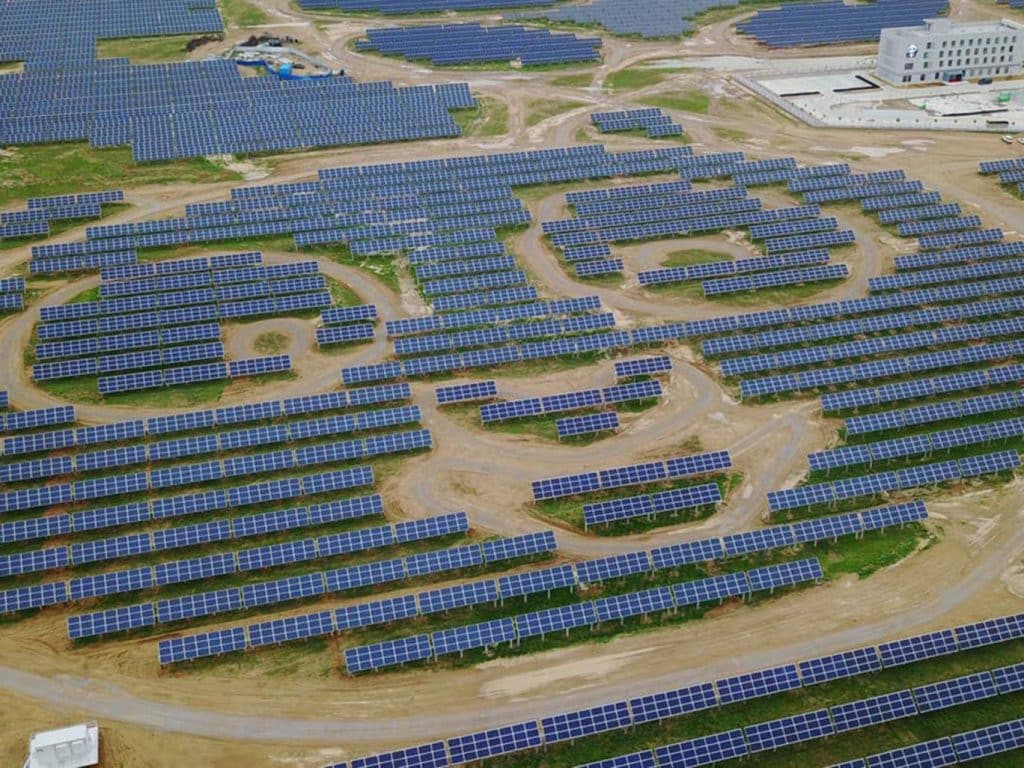 Picture above: the Chinese want to put people to work building environmentally friendly infrastructure, not sorting dangerous and dirty Western garbage. This cute, panda bear themed solar panel project is in Datong, Shanxi Province. My wife and I have traveled there several times, starting in the early 1990s, because there are so many mind-blowing, natural, historical and cultural sites to see nearby. I’ll never forget Datong in the 90s, with blackened skies and coal-fired everything belching putrid dust across the city. Go back now and China’s a changed world. Problem is, the West hasn’t changed its colonial, racist attitude towards one-fifth of the human race.

According to Minter, the measures create a new headache for countries that depend on China to recycle their waste. They’re still struggling to adjust to the ban announced last year and will need years to expand their own facilities, he said.

We remain concerned about the effect these policies have on the global supply chain of environmentally-friendly, energy-saving scrap commodities, said the institute’s president, Robin Wiener [US Institute of Scrap Recycling Industries].

The measures could cut Chinese manufacturers off from a cheap source of metals like nickel, according to Minter. That move will raise manufacturing costs in China and will be passed along to consumers.

“Environmentally-friendly, energy-saving scrap commodities [sic]”? I agree with my Chinese neighbors. It looks and smells like garbage to me. Hell, Messrs. Minter and Wiener, if these “commodities” are that good for Mother Nature and save so much on the hydrocarbon bill, then why don’t you keep them in the United States for the people’s benefit? China started this import banning process in motion as far back as 2013 and passed the first garbage import restrictions over a year ago. What has Eurangloland done to prepare for this? Nothing. Not a damn thing, except hoping Baba Beijing would change its mind. As my previous article explained, the chances of that happening are slim to none. As a gesture of goodwill, China may stretch out the total ban timeline a little, but it has already been pushed out to the end of 2019. That will have made a total of three years for Eurangloland to plan and prepare.

Now all this Western garbage is the Great White Race’s problem to deal with. How about a Manhattan Project for the environment, Eurangloland? It will create millions of jobs for your millions of unemployed and underemployed citizens.

In the meantime, I have a reciprocal trade suggestion to make. Let China export to Eurangloland all the opium it can grow for the next 110 years, with zero import duties and payable only in gold and silver, just like Westerners did to China, 1839-1949 (http://chinarising.puntopress.com/2017/05/19/the-china-trilogy/). Then we can check back in 2128 and see how they are faring socially and economically. I’m sure they will be at the “top of their game”. Hey, Messrs. Minter and Wiener, fair is fair. What’s good for the goose is good for the gander. The Chinese will be so rich that they can just ship you all their garbage for FREE!

Now stuff that in your opium pipe, Eurangloland, and sweet dreams!