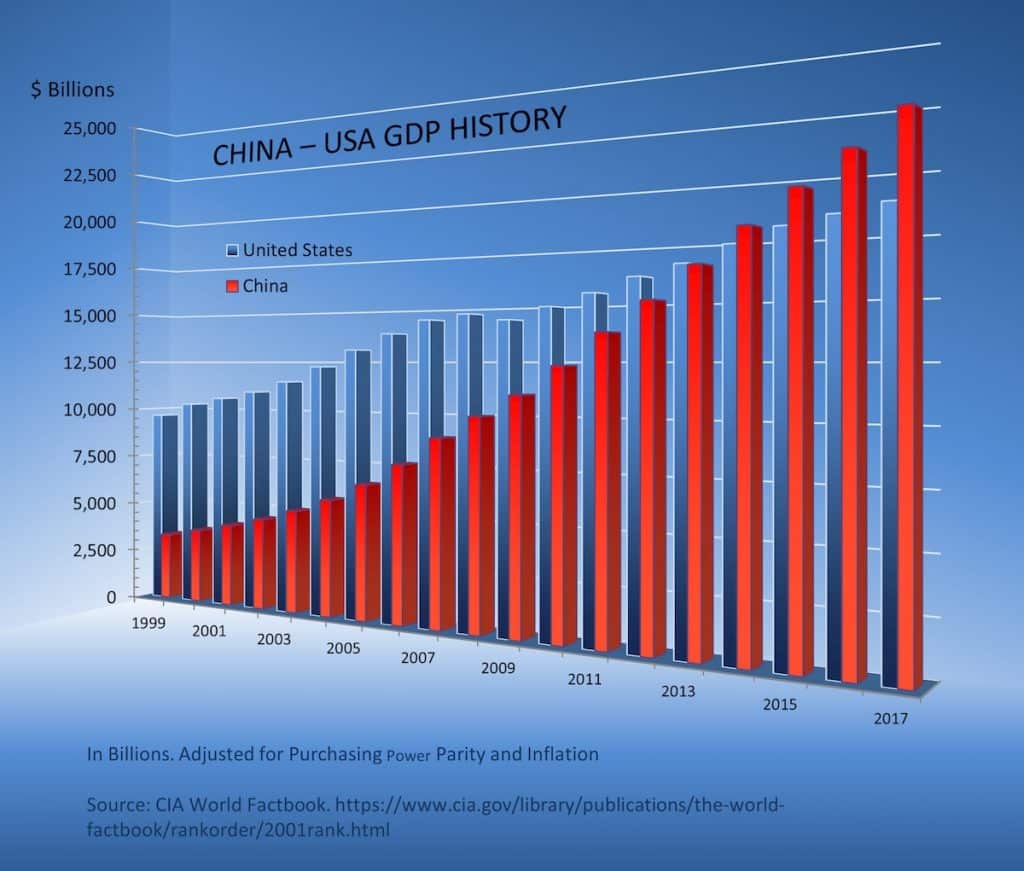 Pictured above: this graph clearly shows that China’s economy surpassed the US in 2014. Other sources say 2013-2015. Either way, the trends are not going to change.


[dropcap]W[/dropcap]hile Western mainstream media likes to rant on about China eventually being the biggest global economy around 2030-2040, the truth is Sinoland already became World Number One in 2015, three long years ago. China surpassed #3 United States in 2014, behind #1 Europe (http://www.economywatch.com/economic-statistics/economic-indicators/GDP_Share_of_World_Total_PPP/2014/), then Sinoland hit the Big Time in 2015, ahead of the EU and the US and has not been looking back since (http://www.economywatch.com/economic-statistics/economic-indicators/GDP_Share_of_World_Total_PPP/2015/).

By 2021, China will have almost one-fifth (20%) of the world’s GDP, while the EU and US will fall down to about 15% each (http://www.economywatch.com/economic-statistics/economic-indicators/GDP_Share_of_World_Total_PPP/2021/).

So, is Western media lying, by saying the US is still Mr. Big and China has years to catch up? No, it’s just that empire wants to always project unsurpassed power and superiority, so it uses measuring sticks that do not portray the real picture.

The West uses GDP comparisons based on the current exchange rates between countries. With the US dollar and euro overvalued and currencies like the Chinese renminbi and Russian ruble undervalued, it gives a distorted picture of reality. The only accurate way to calculate comparative GDPs is by using purchasing power parities (PPPs). PPPs take a basket of goods that would be useful around the world, like flour, chicken, soap, clothes, and services, like housing, public buses, photocopies and haircuts, to compare their local costs to average salaries in-country. Clearly, a kilo of chicken in France costs differently than the same portion in Mozambique, not to mention paychecks.

The idea of PPPs is not some new-fangled gimmick. They go back to 16th century economists who saw the same problem when trading with other countries. A square meter of silk in China might have been worth very little in Shanghai, but cost a fortune in Europe. It made good business sense to know the comparative values of commodities, goods and services, to arbitrage and profit from the difference. When you think about it, this kind of cost and value comparison has been going on since the dawn of humankind, with different tribes and cultures exchanging and sharing goods.

The graph below shows the difference in spades. The Financial Times calculated that China surpassed the United States in PPP GDP in 2013, but in dollar exchange rate terms, it will not happen until 2031, eighteen years later. This does not include discussing what these GDPs are made of. The United States spends more on war and arms than the next 8-10 countries combined, with 1,000 military installations and 250,000 soldiers occupying most of countries of the world, while its national infrastructure is falling apart at the seams (http://chinarising.puntopress.com/2017/08/26/china-is-the-most-plugged-in-big-economy-in-the-world-china-rising-radio-sinoland-170824/). China has one military base in Djibouti, to protect its shipping fleets from pirates around the Horn of Africa, while every year it is building tens of thousands of kilometers of highways, high speed train lines, metros, bus systems, bridges, tunnels, fiber optic and 5G communication networks.

Countries also calculate GDP differently. Britain includes criminal activities like illegal drugs and prostitution, which makes sense for a country that controlled the biggest international, organized crime drug cartel for 110 years, opium, until it was outlawed in China after communist liberation in 1949 (http://www.dailymail.co.uk/news/article-2888416/Who-said-crime-doesn-t-pay-Counting-prostitution-drugs-GDP-figure-seen-UK-s-economy-overtake-France-fifth-largest-world.html).

All those umpteen billions in consumer, mortgage, student, credit card and government interest payments that the United States’ citizens and government pay every day count too. It’s calculated as income for the banks, but is that productive GDP? China prints its own money, so does not borrow from the Rothschilds and Rockefellers to go into public debt. US government interest payments account for a big chunk of every annual budget (https://www.usnews.com/news/articles/2012/11/19/how-the-nations-interest-spending-stacks-up). Chinese citizens’ debt per capita is small compared to Americans and they have one of the highest savings rates in the world.

Not that China wants to flout itself as being the world’s biggest economy. In fact, Baba Beijing loves to be Number Two, officially of course (http://chinarising.puntopress.com/2017/12/10/china-loves-being-number-two-behind-the-us-officially-of-course-china-rising-radio-sinoland-171210/).