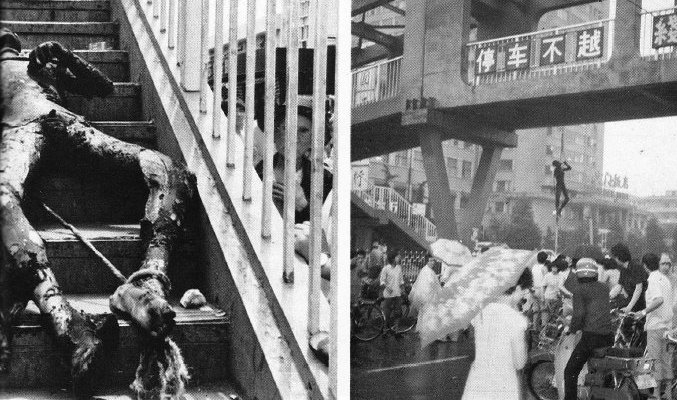 Photo taken on the streets surrounding Tiananmen Square, in the aftermath of June 4th, 1989. Two PLA soldiers are seen burned alive, one on the stairs to the left and another also lynched off a bridge, by the CIA’s “peaceful” protestors. (Image by voltaire.net)

The ritualistic, annual Western flogging of the Chinese people takes place today, June 4th. That day, in 1989, after the government let Tiananmen Square, the world’s fourth largest public plaza, be peacefully occupied by hundreds of thousands of citizens for over five weeks, the protest’s CIA-managed leaders, in a last ditch effort to achieve their goals, turned violent. Up until that night, 30,000 People’s Liberation Army (PLA) soldiers had been stationed in and around Tiananmen Square, unarmed, or at the most, with billy clubs.

The whole operation was financed, organized, managed and supplied by the Central Intelligence Agency (CIA), in cahoots with other Western embassies and their psyops teams, with the obvious goal of overthrowing the Communist Party of China (CPC). After the premier of China, Li Peng – imagine that – the second most powerful person in China, met with the protest leaders on national TV and radio, and was openly insulted by them, the CIA upped the ante to violence and killing, by providing their agents with gasoline for Molotov cocktails and AK-47s, to murder unarmed PLA soldiers. In 1989 Beijing, gasoline was only available in embassies, for government ministries and for the handful of the public who owned cars, petrol was strictly controlled with ration cards.

On that night of June 4th, while machine guns could be heard outside being fired on defenseless PLA soldiers, then paramount leader Deng Xiaoping gave a somber, but resolute and inspiring speech (whose text can still be found in Chinese on the web). It was given to his fellow Politburo members. He said he did not blame the protestors at all. They all understood these (mostly) kids were being used by the United States to overthrow China’s way of life, and replace it with a puppet, capitalist government, to restart China’s century of humiliation, 1839-1949. He talked about how Baba Beijing had patiently and peacefully waited for five long, sweltering weeks, for the protest to wear itself out. The CPC’s leaders had gone out to the protestors, to talk and hear their complaints and were invited on the national stage, where they were insulted. Deng said the protestors’ complaints were valid, which concerned spiking inflation, corruption and market reforms being pushed too fast (“democracy” was entirely a CIA construct). Now, these misguided kids were being turned into killers by their American handlers, murdering their PLA brethren, and that was the last straw (Deng and many of his colleagues were former soldiers and revolutionaries).

In so many words, Deng said, either we let Uncle Sam turn China into another colonial state, or we do what we have to do to maintain stability, harmony and keep the communist revolution on its current trajectory. He asked for a show of hands. The vote was unanimous. It was a point in time, an unforgettable speech and a collective vote that changed world history, for the better, much better.

It was that close, the United States overthrowing New China. Imagine the world today, with the People’s Republic being turned into a continent sized Philippines, Libya or Columbia. Baba Beijing did everything in its power to avoid a military intervention. They were prepared to ride it out for the long haul, to keep it peaceful. What other government would let hundreds of thousands of protestors take over its country’s most iconic public square for five weeks, and defend it with unarmed soldiers? But, once this Western psyops turned violent, it left them little choice.

According to official records, about 300 PLA soldiers were killed, along with 400 violent protestors. With video footage showing masses of protestors filing peacefully out of the square, this sounds about right. Those who stayed on were the ones who were armed and dangerous, shooting at soldiers and firebombing the incoming military vehicles. Many of the PLA dead were burned alive.

Countless Western journalists have recanted the lies they published that night, in the heat of the moment and under great pressure from their propaganda ministries. But, they waited 10-20 years to do so, and you really have to dig deep behind the Great Western Firewall, with its masterful censorship, its Orwellian Memory Hole, to find the articles where they fessed up, because their recantations have been thoroughly suppressed.

Yet still, every year this date, we all go through the same tired ritual around the world, about a fictitious “massacre” that never happened. Twenty percent of humanity is duly flogged for having endured the West’s first, nearly successful color revolution. It’s the West’s anti-China propaganda investment that just keeps on paying dividends.

And every year since June 4th, 1989, the Chinese media duly puts out articles and news clips, reminding this one-fifth of the human race that the Tiananmen protests were a conflated attempt by the United States to destroy their way of life and their highly successful socialism with Chinese characteristics.

Three hundred sixty-five days and counting.
Like to listen on Sound Cloud (the most up to date), Stitcher Radio, iTunes or YouTube? Check out China Rising Radio Sinoland at:

Facebook: https://www.facebook.com/44DaysPublishing
Flickr: http://www.flickr.com/photos/113187076@N05/
Google+: https://plus.google.com/110361195277784155542
Linkedin: https://cn.linkedin.com/in/jeff-j-brown-0517477
Pinterest: https://www.pinterest.com/jeffjb/
Sinaweibo (for Jeff’s ongoing photos and comments on daily life in China, in both English and Chinese): http://weibo.com/u/5859194018
Stumbleupon: http://www.stumbleupon.com/stumbler/jjbzaibeijing
Tumblr: http://jjbzaibeijing.tumblr.com/
Twitter: https://twitter.com/44_Days
Website: http://www.chinarising.puntopress.com
Wechat group: search the phone number +8613823544196, friend request and ask Jeff to join the China Rising Radio Sinoland Wechat group. He will add you as a member, so you can join in the ongoing discussion.
Want a fun, low cost honorary degree in Chinese Studies? Jeff’s book, 44 Days, will have you laughing while learning and becoming an expert on all things Middle Kingdom. If you live in China, buy it from Jeff directly, by contacting him on his Wechat group, or email, jeff@brownlanglois.com