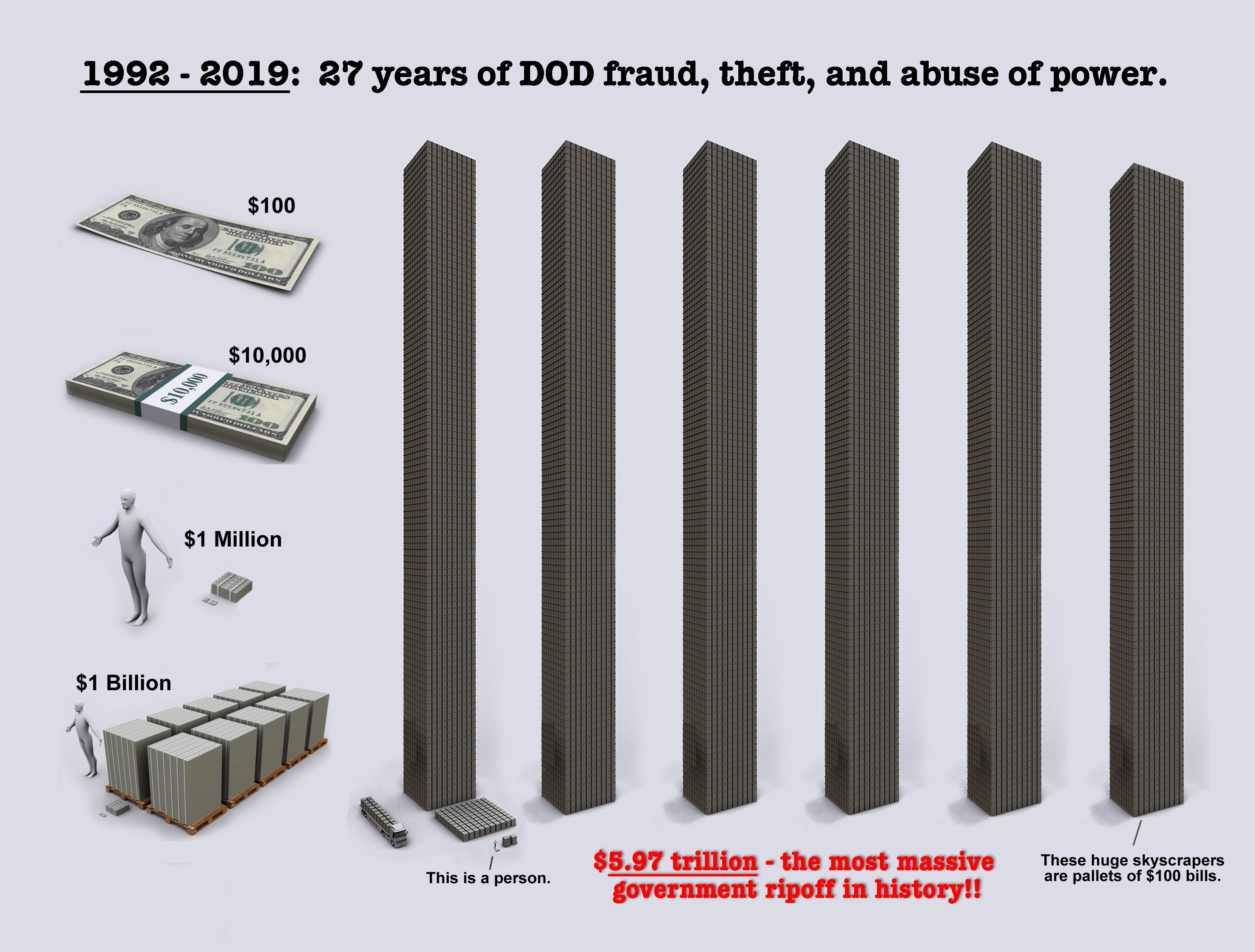 Pictured above: a graphic summarizing the six trillion with-a-T dollars looted by America’s oligarchs, from the pockets of People Like Us (PLU). Time to take it back.

John Rachel (http://jdrachel.com/ and johndrachel2008@gmail.com) has an A-list of the alternative media, Hollywood actors and directors who are ready to get involved in his exciting and important political documentary, The Peace Dividend movie. According to industry norms, these people will officially commit to participate in making the movie, once the financing is in place. John estimates a budget of around $5,600,000, about as much as Michael Moore spent making Fahrenheit 911, which went on to gross over $222 million. In other words, the investors made a HUGE return on their investment. I think The Peace Dividend can do better than that. It’s that good.

Here are the details. Email John above or below, if you know someone who wants to back the movie. More than likely, several investors will pool their money to make it happen.

Looking for Investors: The Peace Dividend movie is a Michael Moore-style film, not only showing the horrors of war on the battlefield but the ravages inflicted right at home in the U.S., especially in at-risk and disadvantaged communities where the squandering of trillions of dollars for military misadventures has destroyed families, our educational system, sometimes whole towns, and severely damaged vital infrastructure.

Goal:  Wake Up Call and Call To Action: Peace in Our Lifetime

Targeting:  180,000,000 everyday citizens who are fed up with endless wars and colossal government waste.

The endless, unnecessary wars and outrageous lies promoting them have resulted in the most colossal government rip-off in human history. The Peace Dividend movie will be the most controversial exposé of this abuse of power and systemic corruption in decades. Better yet, this film tells everyday people exactly what they can do to stop the military madness and reverse the disastrous direction of our country.

While the Peace Dividend movie will present the spectacle of war as never seen before – the death, destruction, and callous inhumanity inflicted both on the battlefield and within our own borders – the appearance of highly-renowned, world-class experts will give it gravity, credibility, and substance. A host of public figures have agreed to appear in the film. They collectively bring wide-ranging expertise in U.S. foreign policy, the military, DOD, our national security agencies, Deep State, our political process, the media, the history and ongoing evolution of the imperial project – U.S. pursuit of world domination – the economics of war and peace, the military-industrial-security complex, and international relations. Several have been key figures in the shaping of contemporary history. Those who’ve agreed to appear in the film include Noam Chomsky, Daniel Ellsberg, Paul Craig Roberts, Colonel Lawrence Wilkerson, Senator Mike Gravel, Dan Kovalik, Colonel Andrew J. Bacevich, Scott Ritter, Congressman Ron Paul, Robert Scheer, Abby Martin, Caitlin Johnstone, Lee Camp, Lt. Col. William J. Astore, Glen Ford, Major Danny Sjursen, and Tom Englehardt.

The project is being considered by an internationally-reonowned, two-time Oscar-winning director. For the lead narration – the face and voice of world peace – we are in negotiations with Sean Penn, Viggo Mortensen, Danny Glover, and John Cusack.

Investment return and finders fees are industry standard. Looking for a contractual commitment. No money need be remitted until the initial base of $5,598,400 is fully funded.

Do you know someone who would be interested in helping bring this exciting and important movie to fruition, as well as having the potential to make a good return on investment for a noble project?