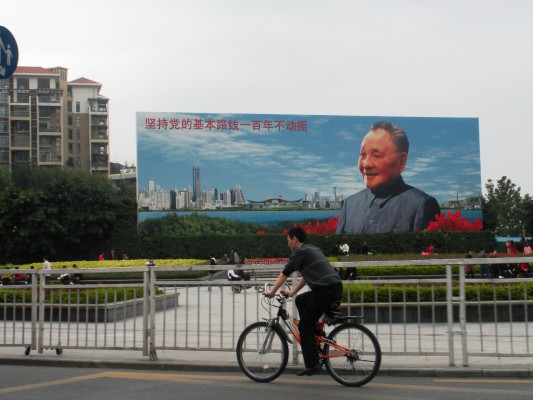 Pictured above: Deng honored on a billboard after his death. It says, “Uphold the Party’s Fundamental Principles – Don’t Waver for a Hundred Years”. He was a committed communist and ardent supporter of China’s socialist way of life, until his last dying breath.


Today is Deng Xiaoping’s birthday. He was born in 1904 in Sichuan, fought as a hard-nosed communist revolutionary against the Japanese, Western imperialists and the fascist KMT. Deng was in and out of Mao’s good graces 1949-1976, became the country’s unofficial paramount leader 1978-1989, to oversee China’s economic reform and opening up era, and passed away in 1997.

I wrote quite a bit about him in my last two books, “China Rising” https://ganxy.com/i/113798/jeff-j-brown/china-rising-capitalist-roads-socialist-destinations and “China Is Communist Dammit” https://www.amazon.com/China-Communist-Dammit-Dawn-Dynasty/dp/6027354380/. He left a huge mark on the 20th century and helped write the world’s history books. He was quite a man.