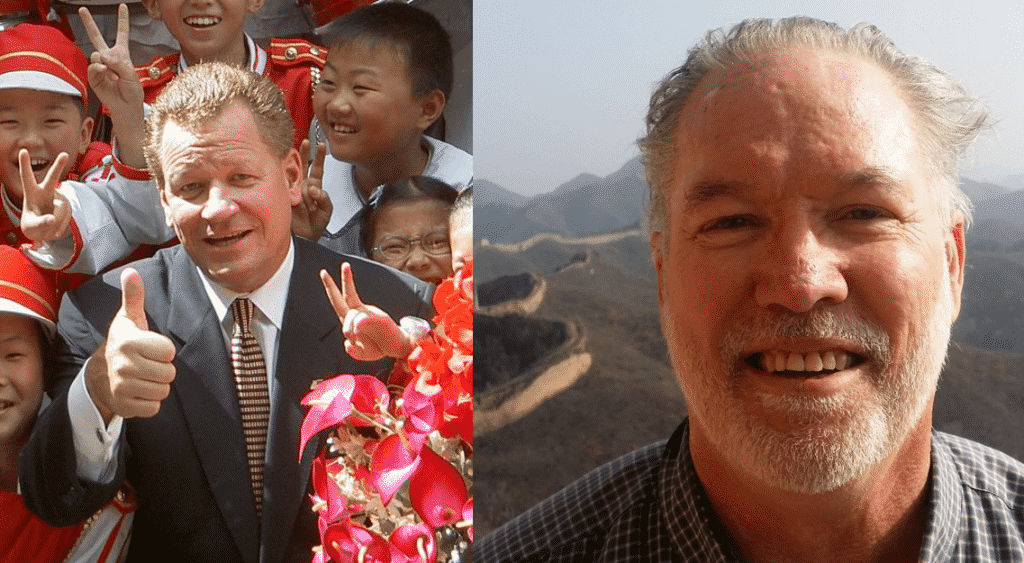 Pictured above, guest James Bradley on the left and China Rising Radio Sinoland host Jeff J. Brown on the right.

Downloadable SoundCloud podcast (also at the bottom of this page), as well as being syndicated on iTunes and Stitcher Radio, (links below)

[dropcap] P [/dropcap]lease join me today on China Rising Radio Sinoland to be with James Bradley.

James has written four books. Two cover World War II, Flags of Our Fathers and Flyboys. The other two, The Imperial Cruise and The China Mirage, explain how America got into WWII in the first place (http://www.jamesbradley.com/).

You may have heard of Flags of Our Fathers, as it was made into a major motion picture, with Clint Eastwood directing (https://www.rottentomatoes.com/m/flags_of_our_fathers/).

I have read the last two and as a fellow writer, I am thoroughly impressed. I know I’ve read a good book when I am knowledgeable about a subject, like Asia in my case, and yet I still learned a huge amount of new facts, events and history. That was the case for me with The Imperial Cruise and The China Mirage, so hats off to James. In fact, I now have handwritten pages of notations and marked up books for reference. In future postings, I will undoubtedly be quoting from these fascinating, real life accounts.

Before talking to James, I also took the time to watch two of his lectures, both of which are quite revealing. He talked at the Pritzker Military Museum in 2009, to promote his just released The Imperial Cruise (http://www.pritzkermilitary.org/whats_on/pritzker-military-presents/james-bradley-imperial-cruise/). He also talked at the Marines Memorial Club in 2015 (https://www.youtube.com/watch?v=MgRJm-tF6Qo&t), to present The China Mirage.

During our interview, James recommended studying this article, which has two fascinating, suitable for framing posters. I read it and it is very topical to Western mainstream media’s dire and dangerous current situation (https://swprs.org/the-american-empire-and-its-media/).

I also recommended two books. Savage Anxieties: The Invention of Western Civilization, by Robert Williams, Jr. (http://us.macmillan.com/savageanxieties/RobertAWilliams), and ’Exterminate All the Brutes’: One Man’s Odyssey into the Heart of Darkness and the Origins of European Genocide, by Sven Lindqvist (https://www.amazon.com/Exterminate-All-Brutes-Darkness-European/dp/1565843592/). They both greatly opened my eyes and were partially responsible for my article on Western racism. I have since gone back and added anecdotes from China Mirage and will do so for Imperial Cruise (http://chinarising.puntopress.com/2018/01/06/slavs-and-the-yellow-peril-are-niggers-brutes-and-beasts-in-the-eyes-of-western-empire-china-rising-radio-sinoland/).

Enjoy a great show and pass it around. James’ story is well worth listening to, to learn and reflect.