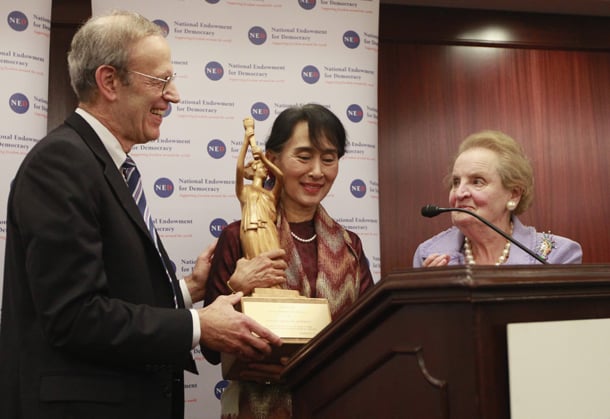 Pictured above: Myanmar leader Suu Kyi receiving a CIA award from its front organization, the National Endowment for Democracy. Notice her mentor on the right is Bill Clinton’s Secretary of State, war criminal Madeline Albright. In Book #2 of The China Trilogy (see below) I wrote about her and Clinton’s blatant genocide in Iraq. Albright is obviously very proud of her genocidal Myanma acolyte.

In a recent article (http://chinarising.puntopress.com/2017/10/19/china-thailand-cambodia-and-the-philippines-say-f-u-to-western-colonialism-china-rising-radio-sinoland-171019/), I said that Myanmar’s current leader, Suu Kyi should be tried for crimes against humanity for her hands-on role in the genocide of that nation’s Muslim Rohingya people, and executed for treason, since she is a Western puppet who does does not represent the interests of her compatriots, but only those of Washington-London-Paris-Tel Aviv.

This article amply explains why my statements are correct, as unsettling as they may be to your notions of normalcy.

Enjoy, learn and discuss. Sharing is caring. Please tell your family, friends and colleagues about China Rising Radio Sinoland (www.chinarising.puntopress.com) and post, share and follow it on all your social media. Then, read The China Trilogy, to understand your world & where you are headed into the 21st century (http://chinarising.puntopress.com/2017/05/19/the-china-trilogy/).