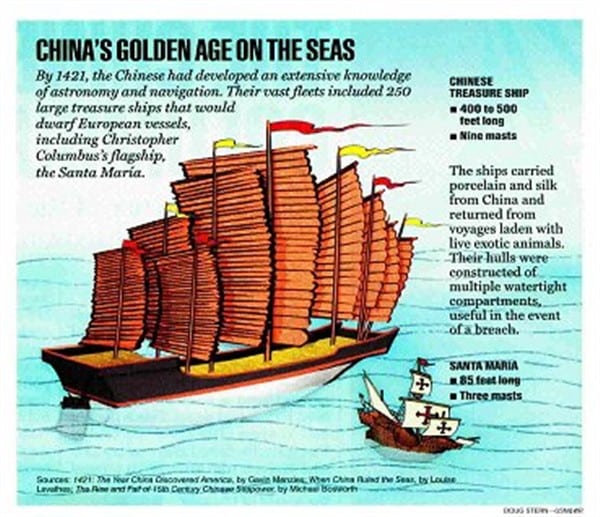 Above: centuries before marauding Western pirates scoured the planet like locusts, beginning in the 1400s, the Chinese were fantastically advanced over the backward West, in all aspects of technology and innovation. Genocidal Columbus’s biggest ship would have qualified as a kitchen skiff for China’s fleets. The New World Exterminator had three pint-sized boats, carrying 87 bloodthirsty corsairs. The Chinese had many hundreds of ships carrying over 27,000 people – half the population of London at the time. With their advanced weapons, they could have overrun England or Spain in a week. Yet the Chinese did not massacre, enslave and rape anybody, nor conquer any lands for plunder. They conducted mutually beneficial commercial-cultural exchanges and diplomacy, making the world a better place for all. This is not Sino-propaganda. This is all irrefutable, historical fact, completely ignored and censored in the West, unless you know where to look.

In this podcast, in addition to reading Robert Temple’s summative book, based on the life works of Dr. Joseph Needham, I also did many hours of online research.

If you have an interest and fascination with technology, inventions, innovation and/or history, Robert Temple’s book, “The Genius of China: 3000 Years of Science, Discovery and Invention” is well worth reading. With tens of beautiful, full color plates, it makes a great coffee table book. Used copies are available for a song on Amazon.

Here are a couple of reviews:

And here is an excerpt of sorts:

The irony of all this is that greedy, rapacious Westerners could have never left their European ports to enslave and plunder the planet, without the myriad of Chinese innovation and technology given to them. The Chinese had all this technology and much more, hundreds of years before the backward West, yet didn’t use it to exploit Mother Earth and its many peoples. Starting in the 15th century, Caucasians did and are still doing so, with venal violence.

Something to ponder while listening to this podcast.

Note: When finished reading, listening to and/or watching this column and podcast, sharing is caring about humanity’s future and getting the non-mainstream truth out to a wider audience. Please tell your family, friends and colleagues about China Rising Radio Sinoland (www.chinarising.puntopress.com – https://twitter.com/44_Days – https://www.facebook.com/44DaysPublishing – https://vk.com/chinarisingradiosinoland –  http://apps.monk.ee/tyrion), post and follow it on all your social media. Sign up for the email alerts on this blog page, so you don’t miss a beat. China is your key to understanding how the world works and where you are headed into the 21st century. So, read “The China Trilogy”. You will be so glad you did! (http://chinarising.puntopress.com/2017/05/19/the-china-trilogy/) CICD: why and how China works
China Rising: the West vs. China
44 Days: Chinese society and culture

One thought on “The Chinese haven’t invented anything in the last 600 years, right? China Rising Radio Sinoland podcast by Jeff J. Brown”