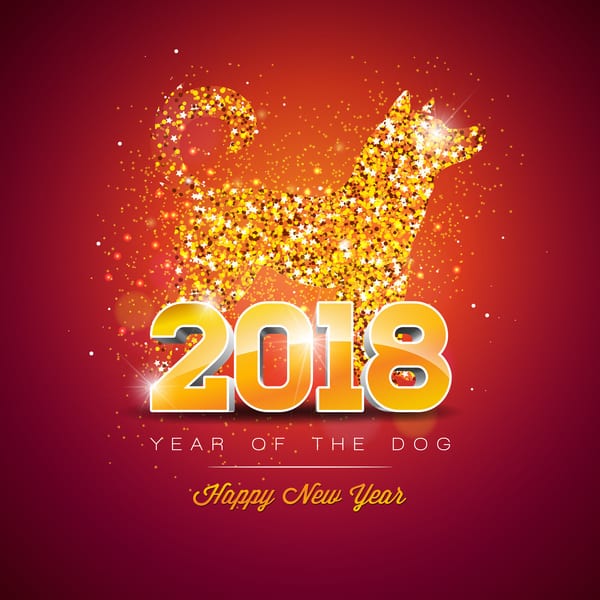 Pictured above: It will be dogs, dogs, dogs as a national motif for the next year, all over China.

[dropcap]H[/dropcap]aving lived and worked in China for a total of 15 years, I’ve amassed and collected a lot of interesting information about this civilization’s 5,000-year history. It’s all fascinating from start to finish, even up to today.

At the top of the list is Chinese New Year, collectively the largest single celebration in humankind – every year for the last five millennia. So, check out the link below, which is a description of all the events that take place in the annual lunar and agricultural calendars of China. It has been so popular that over the last few years, schools in the West have used it in their curricula.

It starts out at January 1 (“1.1”). Scroll down to the next page or search for “2.19”. Right below that is when New Year traditions really begin, with “Laba”. Then read through the daily customs and celebrations during the two-week extravaganza.

Chinese New Year is also a very big deal in neighboring countries Vietnam, Singapore, Philippines, Malaysia, Indonesia, Mongolia, Thailand, North Korea, South Korea, Japan, Laos, Cambodia and Myanmar, which also simultaneously celebrate it, where it is called Lunar New Year. Nor can we leave out the fifty-plus-million overseas Chinese living all over world. Chinatowns across Planet Earth celebrate, from San Francisco to Paris to Melbourne. Given the number of people involved in the most densely populated part of Planet Earth, Chinese New Year is easily the biggest celebration in the world, surpassing Christmas, Aid and Diwali.

Below are images of New Year’s Eve (February 15), the first four days (February 16-19) and the last day of Chinese New Year (March 2), from the traditional lunar and agricultural calendar that I buy every year, so you can compare the activities for each of these days in the above article, to how they are represented visually.

Happy New Year of the Dog 2018 to all the fans and followers of China Rising Radio Sinoland! Day 2, I have tried to get this image upright and no matter what I do, it will not budge. Sorry about that…