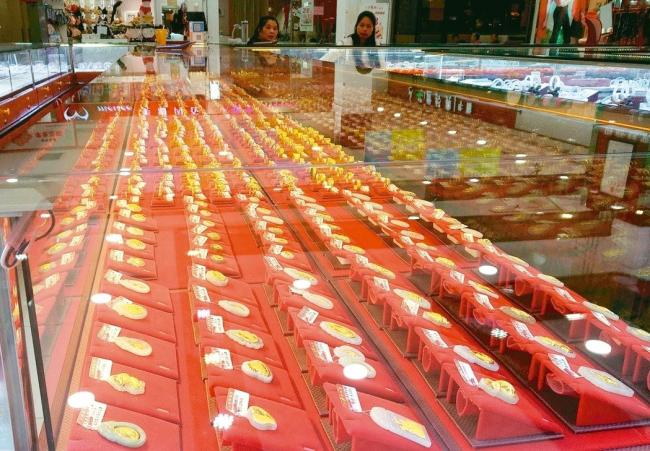 I can walk into any bank branch in China and buy a dizzying array of pure gold products, from ingots to coins to jewelry and commemorative pieces, from 10g to one kilogram (http://chinarising.puntopress.com/2017/12/18/in-china-s-is-for-savings-from-gold-to-tea-to-art-china-rising-radio-sinoland-171217/). Pictured above is a Chinese gold merchant selling all kinds of gold objects. You have the money? Buy all you want! Live in China? Get with the program!

Note: When finished reading, listening to and/or watching this column and podcast, sharing is caring about humanity’s future and getting the non-mainstream truth out to a wider audience. Please tell your family, friends and colleagues about China Rising Radio Sinoland (www.chinarising.puntopress.com – https://twitter.com/44_Days – https://www.facebook.com/44DaysPublishing), post and follow it on all your social media. Sign up for the email alerts on this blog page, so you don’t miss a beat. China is your key to understanding how the world works and where you are headed into the 21st century. So, read the “The China Trilogy”. You will be so glad you did! (http://chinarising.puntopress.com/2017/05/19/the-china-trilogy/)

Two-thousand-seventeen is the first time that gold output has fallen sharply since 2000. The main reason is that mainland China has introduced green taxes, resource tax policies, as well as the withdrawal of mining rights within eco-functional zones such as nature reserves and the reduction or closure of some gold mining enterprises.

What all this means is that Baba Beijing is still mining the hell out of gold, but is now doing it in a more environmentally and socially responsible fashion, which is wonderful news.

My wife and I toured a gold ore extraction plant in Mindanao, Philippines, just a week after Rodrigo Duterte had been elected President in 2016. One of his campaign promises was to close down thousands of illegal gold mines and ore extraction plants, because of their destruction to the environment and loss of life among the workers. Thus, we were curious to see how it all worked.

After our visit, we were and are in total agreement with Duterte. They use cyanide and mercury to extract 200g of 20-karat gold out of 30,000kg of low grade ore. Even if it’s high gold content ore, it doesn’t matter, since the process is the same. I climbed up to look down into one of the 30mt ore slurry vats and almost passed out from the cyanide gas. Just being up there for a few minutes and I was sick and coughing the rest of the day, with a throbbing headache and dizziness. Workers were up there with nothing more than cotton masks, and they were breathing that noxious fog for days on end.

We met the owner, not over fifty years of age and trying to sell the place, shaking like he had severe Parkinson’s disease, from all the poison his body had absorbed over the last ten years, while working the ore crushers, vats and filters, as well as the acetylene torches to get the black 20-karat stuff from the vats up to 24-karat purity. About the only safe thing we saw was the borax (boric acid) they use to coat the coarse gold before heating it up with the torches. But the fumes are toxic, so unless a proper chemical ventilation hood is used, watch out! Do you need to ask if this place had one? Get outta here!

We also saw where this processing plant’s effluent ended up, the untold thousands of cubic meters of cyanide drenched, leftover waste sludge. They just opened the cyanide tank faucets below, with a filter under the drain mouth to catch the tiny, black nuggets of gold, only to let the rest of it run into a farm field at slightly lower elevation. The vat now emptied, they spent hours, with their backs bent over the poisoned slurry, breathing the fumes, as they sifted through the muck, looking for the small nuggets of impure gold. They were wearing flipflops, shorts, no gloves, no masks. Yikes!

Over the years, this unmanaged, meandering lagoon of death was now hundreds of meters across and just as long. Wanna buy some rice and farm produce grown nearby? Bon appetit. Plants take up the cyanide and mercury and they end up in the food chain, while remaining in the soil for years, and for all other living things, they spell death and mental retardation, respectively. It was truly an ecological disaster zone. How many tens of thousands of these small, unregulated gold ore extraction plants are there, everywhere gold is mined in the developing world?

We couldn’t visit an illegal gold mine, as planned, because rains had made the dirt road impassible, but we researched that they are generally death traps, with collapses and explosions the order of the day. Not to mention permanent safety and environmental problems, once the mines are abandoned. Maybe it was good we didn’t get to go.

As we sat and talked with the ore extraction plant owner, shaking and rocking violently, whose days on earth were obviously fewer than mine, with me being many years older, my wife and I were so disturbed by what we saw that we took a long, hard pause. We buy physical gold and hold it for our retirement, one little 50g Chinese ingot at a time, as we slowly save up the money each time. Did we want to support this environmental debauchery, not to mention the broken, shortened lives of everyone who has so few options and opportunities in life?

As people of simple means and further along life’s timeline, we feel we have no other choice. Knowing that all investment markets around the world are as rigged as a crooked roulette table, and gold prices are being artificially suppressed, in order to keep the values of the US dollar and euro from falling through the floor, gold is something we can buy that is truly undervalued and has a decent chance of appreciating before we die.

Thus, reading that Baba Beijing actually produced 27.3mt less gold last year, in order to limit or improve what we saw in the Philippines, does assuage our consciences a little, since we only buy Chinese gold. If that’s the cost for less polluted lands, water, food and longer living gold industry workers and their neighbors, then that is a price well worth paying, even if it means spending more for the stuff.

So, cheers to Baba Beijing for doing the right thing and making gold investing saner and safer! And here’s to hoping the President Duterte can follow through on his promise to close down all the illegal gold mines and ore extraction plants in the Philippines. Many countries have blood diamonds. Many others have toxic gold.

I have reported a number of times about the role of gold in Chinese finance, investing, history and daily life, often with my good buddies Rory Hall at The Daily Coin (https://thedailycoin.org/) and Dave Kranzler at Investment Research Dynamics (http://investmentresearchdynamics.com/)

At the end of the article are a few photos of our 2016 visit to the gold ore extraction plant in Mindanao, Philippines.

Let’s close out this golden article and podcast with a favorite artist from my youth, Neil Young. I’ve listened to the studio version of Heart of Gold from his Harvest album about a thousand times over the decades. Below is a wonderful 1971 live version, where he fumbles around to find the right harmonica to play “this new song” he had just written. It is priceless. My gosh, in 1971 I was in 11th grade, almost 50 years ago… 7. This is the area where they take the coarse gold, mix it with borax and purify it up to pure gold, using the acetylene torch you see. There is no ventilation hood, so the workers also get poisoned from all the fumes produced by the hot flame.