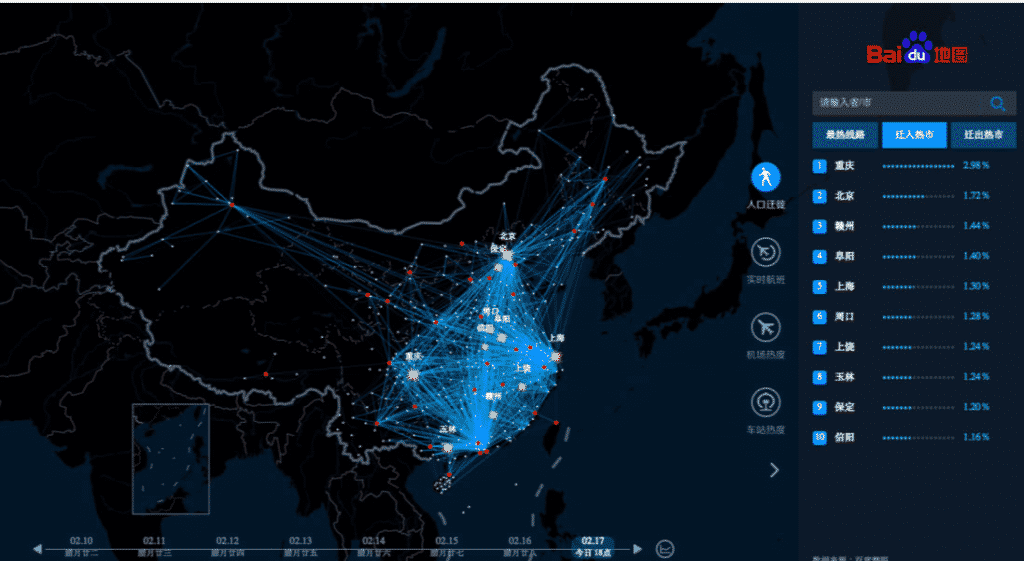 Note: When finished reading, listening to and/or watching this column and podcast, sharing is caring about humanity’s future and getting the non-mainstream truth out to a wider audience. Please tell your family, friends and colleagues about China Rising Radio Sinoland (www.chinarising.puntopress.com – https://twitter.com/44_Days – https://www.facebook.com/44DaysPublishing – http://apps.monk.ee/tyrion), post and follow it on all your social media. Sign up for the email alerts on this blog page, so you don’t miss a beat. China is your key to understanding how the world works and where you are headed into the 21st century. So, read “The China Trilogy”. You will be so glad you did! (http://chinarising.puntopress.com/2017/05/19/the-china-trilogy/

Picture above is a screen shot from Baidu Maps, which graphically shows humankind’s largest migration. It happens every year for Chinese New Year and a bigger record has probably been set annually for the last five millennia. The Year of the Dog 2018 will be no different. The lozenge above, looking like the Southern Cross star formation, which graces Australia’s and New Zealand’s flags, clearly shows China’s four megacities: Beijing to the north, Shanghai to the East, Guangzhou to the south and Chongqing to the west. The lonely spur way out west is Urumuqi, the capital of Muslim Xinjiang, and the isolated city to the north is Harbin, the capital of Heilongjiang. Brrrrr… It’s frigging cold up there right now, like minus twenty. Glad to be reporting from much, much further south in China.

My wife and I are with our daughter, who just finished her semester finals (all in Chinese!) at Beijing Normal University. Yesterday, we flew from Shenzhen to Sanya, Hainan, the island you can see on the map that is south of Guangzhou and off the coast of Vietnam. A great lunch at a packed Pizza Hut at the train station before moving on, we then took a 50-minute, 250 kilometer per hour high speed train (only ¥59, or about $9.00) to Qionghai, on the east coast of Hainan, right next to Boao, where Baba Beijing has its own big Davos style confab every year (http://english.boaoforum.org/).

Such is a day-in-the-life of the Chinese people. We are joining these 1.4 billion citizens, who will (mostly) travel home, go on vacation in-country or abroad for the annual New Year pilgrimage. A total of about three billion passenger-journeys will take place, from cars, to buses, trains and planes. My family has added to the tally.