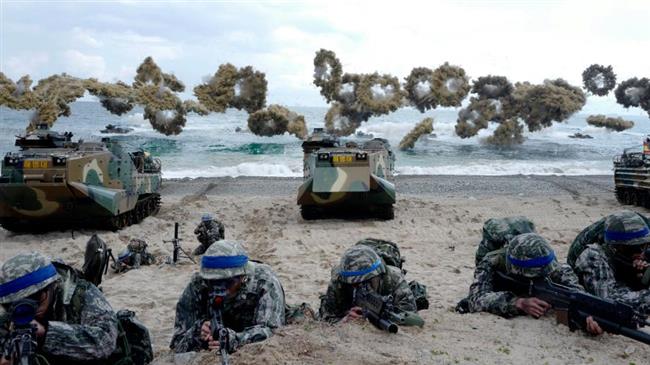 Japan and South Korea are already occupied American colonies, brimming with 50,000 and 30,000 red-white-and-blue centurions, respectively. Not to mention that the imperial satrap Australia has 1,250 (and growing) and in Guam another 7,000.  Did I forget to mention that Philippine President Rodrigo Duterte is trying to kick out of his country 6,000 jarheads, who practice invading China and North Korea from there? All told, we are knocking on 100,000 American troops, hundreds of military bases housing hundreds of weapon-laden airplanes and hundreds of nuclear warheads – all to encircle China, North Korea and Russia’s eastern flank.

On top of all these bristling boots in Asia, the US Navy is stationing 60% of its entire global fleet off the coast of China (http://chinarising.puntopress.com/2017/12/22/south-china-sea-brouhaha-the-down-and-dirty-from-china-rising-radio-sinoland/), to prove to the Chinese that the South China Sea is not Chinese after all, even though the Chinese have been sailing there and doing international trade, fishing and diplomacy for the last 5,000 years. Take that, Scourge of Asia, you Yellow Peril (http://chinarising.puntopress.com/2018/01/06/slavs-and-the-yellow-peril-are-niggers-brutes-and-beasts-in-the-eyes-of-western-empire-china-rising-radio-sinoland/)!

But that’s not enough. For empire, it never is enough (http://chinarising.puntopress.com/2018/01/01/a-china-rising-radio-sinoland-reality-map-if-china-were-the-usa-china-in-the-americas/).

Now, Baba Beijing (China’s communist leadership), must be shaking in its boots, pissing its drawers, shitting its pants and strategizing a humiliating retreat. Fear the force! Run for your lives! It’s gonna be rout, boys and girls! OMG, O-H-M-Y-G-A-W-D, Uncle Sam is planning to send even more thousands of America’s toughest, meanest badass ATEN-HUT Marines to Asia (http://www.presstv.com/Detail/2018/02/11/551960/US-military-Marine-Corps-Chinese-influence-East-Asia-Gen-Robert-Neller).

Why? Here it is, straight from the horse’s mouth, US Marines Commandant General Robert Neller,

Of course, don’t worry China. According to Herr Neller, this redeployment is merely “a global resetting of forces”, not a “buildup for war”. They will only be there to intervene “if a conflict were to break out.” Hmm, I wonder which side is likely to pull off a false flag, in order to justify a conflict to break out?

Together, from Indonesia to Pakistan to Russia to the Philippines, and most other countries in between, they are connecting their infrastructure and trade together, with ports, airports, trains, highways, bridges, pipelines, satellites, fiber optics, fintech (http://chinarising.puntopress.com/2017/10/25/how-can-western-capitalism-beat-this-thats-the-rub-it-cant-china-rising-radio-sinoland-171022/), cultural events, education and tourism, into a holistic network. They are using their very own Asian Infrastructure Investment Bank (AIIB) to finance this plethora of connective projects (http://chinarising.puntopress.com/2016/04/19/shadow-of-truth-jeff-brown-in-beijing-why-does-the-west-fear-china-16-4-13/), not to mention BRICS (http://chinarising.puntopress.com/2017/09/07/brics-is-euranglolands-canary-in-the-imperial-mines-china-rising-radio-sinoland-170907/).

So, go ahead Uncle Sam, send in those badass, take-no-prisoner YOU-ESS Marines. There is a long, long list of 21st century Asian infrastructure and development to destroy!

Below is a photo on America’s Asian battlefront, with an ode to the West’s thousands of global imperial wars, invasions and occupations, which are one, long, continuous My Lai massacre, every day, every hour, everywhere (https://www.youtube.com/watch?v=1NwnnLnvQYA , https://www.youtube.com/watch?v=91Zr7Kp6ooY). Not just the West’s, but all wars, for all time. War is hell on Earth for soldiers and civilians alike, living madness. It’s what distinguishes us from all other species, our dehumanization, genocide, extermination, rape, plunder, and it’s all based on racism, something too easy to overlook (http://chinarising.puntopress.com/2016/11/05/the-dark-skinned-exploited-peoples-of-the-world-are-calling-the-west-for-what-it-is-racist-china-rising-radio-sinoland-161105/ , http://chinarising.puntopress.com/2017/01/21/ramsey-clark-a-life-of-indomitable-courage-talks-with-jeff-j-brown-on-china-rising-radio-sinoland-170120/ , http://chinarising.puntopress.com/2018/01/06/slavs-and-the-yellow-peril-are-niggers-brutes-and-beasts-in-the-eyes-of-western-empire-china-rising-radio-sinoland/). To say that war turns good people into animals is an insult to all other creatures in this magnificent kingdom.

The Daily Dialogue of War: See that new bridge? Bomb it, boy! Hey isn’t that a high speed train station? Send in the F-35s! And that shiny new international airport? Tomahawk the shit out of it, Bubba! Over there, that new deep water port? Torch it with napalm! And that fiber optics terminal? Hand me that rocket propelled grenade launcher, it’s time to go on a turkey shoot, Jerry! Just like those blanket-ass Injuns back home and those stupid sand niggers in the Middle East, we know what’s good for ‘em, Buford. We gotta bring peace, prosperity and democracy to these godless gooks! Nothin’ but a bunch of yeller-livered zipperheads, anyways, I’m tellin’ ya! They don’t deserve to live another day. But before that, we got some little girls to ride hard… Virgin poontang for the takin’, boys! Me first!

Postscript 2018.04.24: I was exercising today, listening to Gang of Four’s 1991 album, Mall, and realized that their song, F.M.U.S.A. really catches the zeitgeist of my short monologue above. Better late than never. Enjoy,