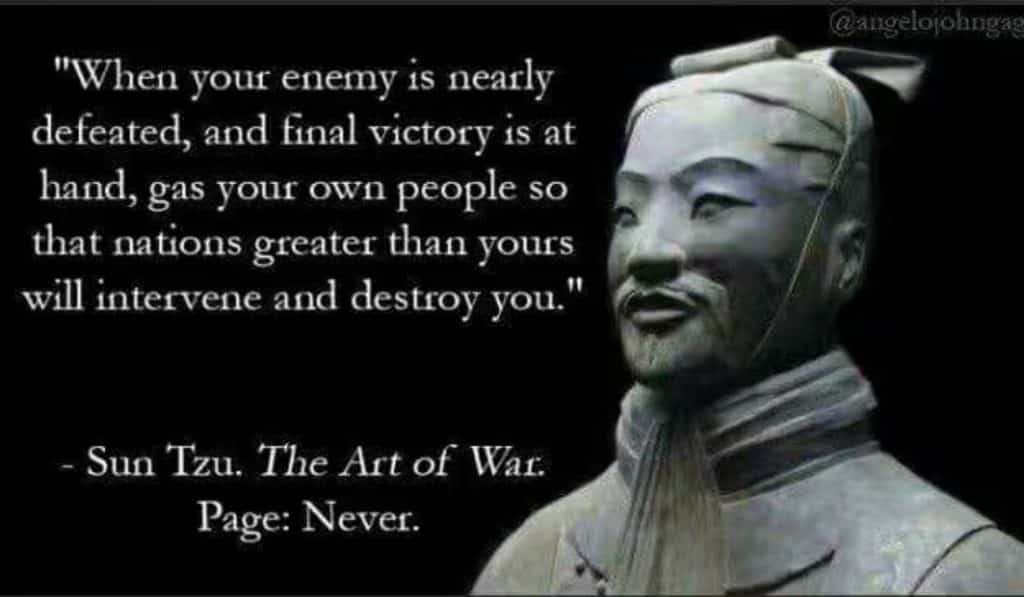 Picture above: Sixth century BC’s Sun Zi was credited with writing his “Art of War”. The Chinese have no history of using false flags in conducting governance and war. Western elites cannot stay in power without them. This says volumes about differences in philosophy of the expansionist, evangelical, acquisitive, genocidal West and China’s risk aversion in the realms of taking care of the citizens and conducting geopolitics.

[dropcap] M [/dropcap]y, oh my, how short are our memories! Exactly a year ago to the week, a US sponsored, B-movie chemical attack was propagandized in Western media, blamed on Syria and its president, Bashar Assad. Over dinner with his guests at Mar-A-Lago – Chinese President and Mrs. Xi Jinping – newly elected President Donald Trump triumphantly announced that the US bombing of an airbase in Syria was commencing, while they were being served dessert! You can’t make this stuff up.

It was all to make Trump look imperial and all-powerful. The US told the Russians and Syrians well in advance, so that the airfield could be emptied. America’s supposedly ass kicking cruise missiles dug a few holes in a deserted hangar or two. Western propaganda crowed that the morally superior Great White Race did what it does best: exterminate, maim and destroy those whom they decide need Eurangloland’s “protection”, doublespeak for resource extraction, human exploitation and slavery.

It’s really worth reading/podcasting what I wrote a year ago. Talk about déjà-vu. Rewind and play again (http://chinarising.puntopress.com/2017/04/13/is-trump-threatening-to-attack-north-korea-or-is-it-a-sino-us-nk-menage-a-trois-dance-china-rising-radio-sinoland-170413/).

Flash forward 365 days and voilà, Act II, Scene I. Another really badly produced D-grade-movie chemical attack in Syria has been blasted out to the world by the Western Propaganda Foghorn Machine, accusing Assad and Syria of gassing their own people (https://consortiumnews.com/2018/04/21/beware-of-white-helmets-bearing-news/). This time, junior deputies Poodle France and Bulldog Britain joined in with the world’s biggest serial terrorist, Uncle Sam, to lob missiles at “chemical plants” in Syria, to show the world that… well, you get the picture. I wouldn’t be surprised if the damage was minimal.

But, in the West’s eyes, the global propaganda Big Lie keeps working – WE’RE BADASS AND RUN YOUR SHOW, so here’s to victory for empire.

Western citizens, stand tall, stand proud. I’ll be checking back with you in April 2019, right on schedule, if not sooner.

Postscript: David Pear (who has been interviewed twice on China Rising Radio Sinoland) responded to this article by sending me a piece he wrote in 2015. The very first Arab Spring demonstrations in 2011 were 100% concocted by the CIA complex and every “rebel” terrorist since has been and continues to be funded by the West (https://www.opednews.com/articles/Syria–Where-are-the-Well-by-David-William-Pear-Al-Qaeda_Hezbollah_Kurd_Moderate-Muslims-150925-604.html). An article by Tony Cartalucci (another CRRS guest) fills in details (http://landdestroyer.blogspot.hk/2018/04/the-war-in-syria-was-us-intervention.html). Last but not least, Peter Koenig, who was also recently on the show, just wrote a good article, with more background and predictions (https://www.globalresearch.ca/syrias-victory-the-failed-attack-by-war-criminals-trump-may-and-macron/5636350).


To see the people the West is killing and maiming by the hundreds of thousands, Andre Vltchek presents a very moving portrait of their testimonies (https://www.therussophile.org/andre-vltchek-voices-of-the-syrian-people.html/). Ditto Yemen, Libya, Iraq, Afghanistan, Venezuela, DPRK and the hundreds of other places Western empire tyrannizes the people…

3 thoughts on “The exact same thing happened a year ago in Syria. You can’t make this stuff up. China Rising Radio Sinoland 180416”