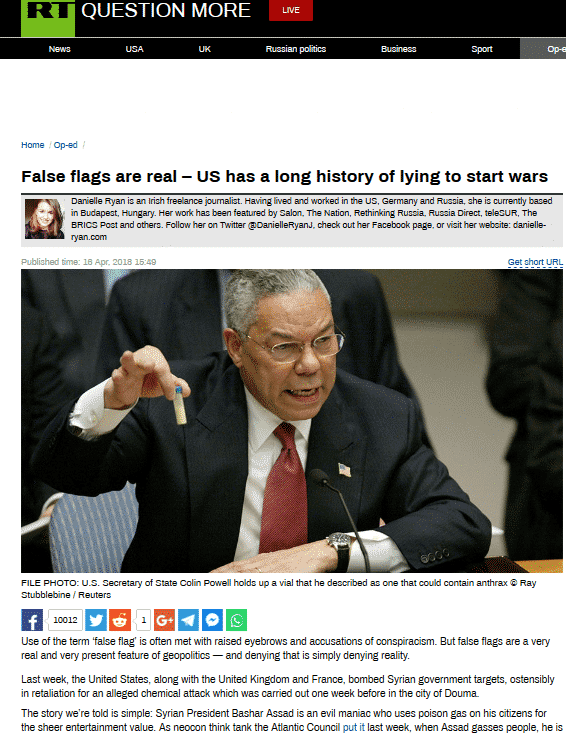 Picture above: RT with an op-ed article headline using the term “false flag”, the first time they have ever done so, to the best of my knowledge.


[dropcap] A [/dropcap]s a follow-up to my previous article on Syria (http://chinarising.puntopress.com/2018/04/14/the-exact-same-thing-happened-a-year-ago-in-syria-you-cant-make-this-stuff-up-china-rising-radio-sinoland-140416/),

It may seem trivial, but something very important happened this week. For the first time that I know of, RT, the award-winning news outlet posted the term “false flag” on its website (https://www.rt.com/op-ed/424298-false-flag-syria-attack/). On the same day, they let another op-ed writer use it too, in the body of their article (https://www.rt.com/op-ed/424407-fisk-syria-media-strike-war/).

Currently, virtually 100% of the mainstream media censors false flags with relentless zeal, which is understandable, because they are mostly bought, blackmailed and extorted by the CIA (http://claritypress.com/Valentine.html). But, I have always bemoaned how alternative, real news outlets have been brow beaten and cowed into the CIA’s “conspiracy theory” narrative, forgetting that it was the CIA that invented this term in the first place. Spookville (the collective CIA-MI6-DGSE-BND spy complex) rushed this moniker into the media after the Warren Commission released is bogus 1964 report on John F. Kennedy’s CIA assassination (https://ganxy.com/i/113798/), and even Joe and Jane Sixpack knew rotten CIA fish when they smelled it. Getting the “conspiracy theory” meme to replicate exponentially in the media’s DNA, to shut up Joe, Jane and anybody else with half a brain has been one of the CIA’s most successful operations ever. They can do it, because the CIA is totally embedded in non-socialist, non-communist media around the world, from Africa, to the Americas, to Europe and Asia (https://www.21cir.com/2018-04/50-facts-the-world-needs-to-know-about-mainstream-medias-relationship-with-the-us-government.html).

Joe and Jane Sixpack were right in 1964 and still are. Westerners need to snap out of their propaganda brainwashing and take a long, bitter whiff of their corporate-state-run media. If we take Benito Mussolini’s definition of fascism as the marriage between government and business, then the West has been fascist since the 1880s, with the founding of conglomerates, corporations, cartels and trusts, spanning imperial colonies around the world. During this same 19th century time period, US media became (and still is) paid-for, corporatized government propaganda, which is no coincidence. Postwar, the rest of Eurangloland (NATO, Europe, Israel, Australia and New Zealand) has joined media forces with America.

The Chinese – and all communist-socialist countries, for that matter – are honest about it,

Yes, we control the media, in order to provide economic stability, social harmony, national progress and development. Not to mention to also prevent Spookville hooligans from trying to overthrow our government and destroy our way of life.

Western governments, Wall Street, the military-industrial complex and Spookville, through their collectively owned mainstream media empire, do what they do best: relentlessly propagandize the Big Lie and pulling off false flags like they were popcorn, to keep the masses scared shitless, while pushing them into eventual police state serfdom, a process that is now beyond the tipping point. Sounds like fascism to me. Just ask Mussolini, Adolf Hitler and Hideki Tojo.

Better late than never for RT. Other news sources have had the courage to speak truth to power long before. Press TV has written occasionally about false flags and I have been on their news programs talking about them (http://www.presstv.com/). False flags are Kevin Barrett’s main mission at Truth Jihad (http://truthjihad.com/). The Greanville Post, where I am an editor, has for years not flinched from reporting on false flags (http://www.greanvillepost.com/2018/04/14/poison-gas-weapon-of-choice-for-false-news/), nor has China Rising Radio Sinoland (http://chinarising.puntopress.com/2017/05/06/a-us-government-lie-exposed-the-1995-oklahoma-city-bombing-china-rising-radio-sinoland-170505/). This is by no means the complete list, which is, encouragingly, growing.

In the second book of The China Trilogy (http://chinarising.puntopress.com/2017/05/19/the-china-trilogy/), China Rising – Capitalist Roads, Socialist Destinations (https://ganxy.com/i/113798/), I did a complete exposé on three historically important Western false flags, to underline their importance in Western “governance” and how they have and continue to alter the course of human events, all for the worse.

Even a few brave mainstream personalities get in the act. Ron Paul, a former Texas representative bravely talks about empire and its use of false flags (http://www.ronpaullibertyreport.com/). MSM commentator Tucker Carlson questioned the hilariously obvious Las Vegas false flag (https://www.youtube.com/watch?v=2mOcSKa8zmI) and was just fired from Fox News, for doubting last week’s hilariously obvious false flag in Syria (http://www.ibtimes.com/tucker-carlson-blasts-geniuses-blaming-assad-syrian-gas-attack-2670660). Rand Paul left Wolf Blitzer speechless on CNN, by saying that Syria was a false flag (http://www.greanvillepost.com/2018/04/17/rand-paul-leaves-disinformer-wolf-blitz-speechless-says-syrian-gas-attack-was-false-flag/).  But, he just announced his retirement and need not run for reelection, so maybe he felt more at liberty to speak the truth.

False flags are the West’s #1 policy initiative. Otherwise, the people would rise up and overthrow their rotten, corrupt, corporate Spookville governments, who are slowly bleeding them dry and driving them into slave status. False flags keep the citizens cowed, frightened and focused on imaginary enemies, like Muslims, Russians and North Koreans. Not to mention at home, with Blacks, Latinos, Asians and identity politics. False flags and identity politics keep everybody divided and fighting each other, instead of demanding meaningful change and overthrowing the citizens’ masters.

RT is a start, but there are still way too many good and principled journalists and writers – a number of whom I am friends with – who need to come out of the false flag closet and talk about the West’s use of them as a matter of fact. These defenders of justice rail against empire and demand peace. What they need to acknowledge is that Western false flags are the chaos and catalyst that keep their dreams from ever being realized. If everybody with a conscience would expose the West’s false flags, then and only then can we begin to imagine a fairer, more just and peaceful world.

2 thoughts on “The West’s false flag addiction is slowly getting exposed in the media – Syrian follow-up. China Rising Radio Sinoland 180418”