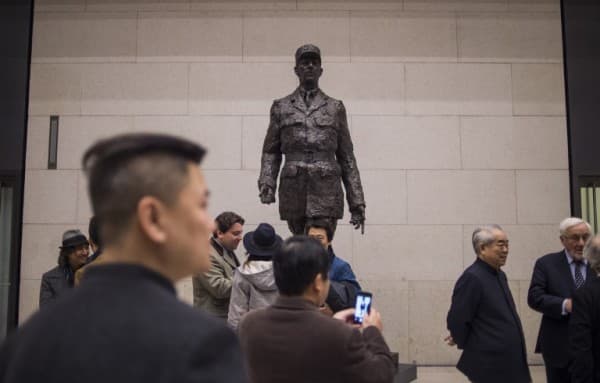 Pictured above: I know, you’re asking, “What does a statue of Charles de Gaulle have to do with Russia, Croatia and the World Cup”? There IS a connection. Read on…


[dropcap] W [/dropcap]ith the time zone difference, the World Cup matches in China have been starting at 18:00, 22:00 and then 02:00 the following morning. Three nights ago, it was Russia and Croatia in their quarterfinal match, which kicked off at 02:00.

At 02:30, I was suddenly awakened by a deafening, raucous cheer. Russia had just drawn first blood against Croatia. Mind you, our double-paned windows were closed, we had on an air conditioner and the bar-restaurant where the eruption took place is 12 floors below us! It was easy to realize that my middle- and working class neighbors were supporting Russia, because when Croatia scored nine minutes later, there was total silence below.

By then, I couldn’t go back to sleep and when Croatia went ahead, 2-1, again, dead silence from the Chinese football fans far below. Extra time and it was 04:30 in the morning when Russia made it 2-2 in the last minute of overtime. This time, it was silent. I guess the fans were too worn out, too drunk or could sense that, while Russia gave it hell, by all reports, Croatia was clearly the stronger side.

When it went to penalty kicks and Russia missed the first salvo, again, total silence. Like the bad omen of a devastating flood or earthquake, that for thousands of years could spell the loss of a Chinese emperor’s Heavenly Mandate, that blown first kick portended the obvious. Russia’s unimaginable World Cup run to the quarterfinals was coming to a proud, but defeated end.

This was all a great anecdotal experience about life on the streets of China and geopolitical preferences of the average citizen. Not to mention, local football fans who are willing to go out at two o’clock in the morning to root for Russia, when China never even qualified for the World Cup (http://chinarising.puntopress.com/2018/06/22/100000-chinese-going-to-the-world-cup-in-russia-with-no-team-to-cheer-for-china-rising-radio-sinoland-180622/ and http://chinarising.puntopress.com/2018/07/02/football-was-chinas-national-sport-for-millennia-why-are-they-so-bad-now-china-rising-radio-sinoland-180702/).

My wife and I will be joining them tonight, at 02:00, to see France go against Belgium. It should be a great match. When we went to watch France dispatch Argentina in the first round of the knockout phase, 4-3, we were the only non-Chinese at our neighborhood restaurant-bar. The crowd was decidedly in favor of France. I’m not sure why, given its crucial colonial role in profiting from China’s opium enslavement during the West’s imperial century of humiliation, 1839-1949. However, that sordid fact is forgotten in the minds of most Chinese, although they will tell you right away about Great Britain’s and the United States’ dastardly role in China before 1949’s communist liberation.

Instead, they fondly recall President Charles de Gaulle, who was the first Western leader to recognize Red China, way back in 1964, in spite of intense imperial pressure from Uncle Sam not to do so. De Gaulle was staunchly anti-American, which Baba Beijing really appreciated. The Chinese also admire de Gaulle, since he saw the writing on the wall and willingly pulled out of Southeast Asia as a colonial ruler, in what the French called Indochina, back in 1954. This, after the US extorted him to militarily occupy Dien Bien Phu, using all American materiel, or else be deprived of postwar Marshall Plan funding, to help rebuild France. Your typical American “ally” relationship – nothing but a poodle to be kicked around. Trapped in a bowl surrounded by mountains, Dien Bien Phu led to the inevitable and humiliating loss of thousands of French soldiers, at the hands of Ho Chi Minh’s communist forces. It was time to leave. All of this fascinating and largely unknown background is richly detailed in Books #2 and #3 of The China Trilogy (http://chinarising.puntopress.com/2017/05/19/the-china-trilogy/), China Rising – Capitalist Roads, Socialist Destinations (https://ganxy.com/i/113798/) and China Is Communist Dammit – Dawn of the Red Dynasty (https://www.amazon.com/China-Communist-Dammit-Dawn-Dynasty/dp/6027354380/).

For the 50th anniversary of Sino-French relations, China accepted a towering three-meter bronze statue of de Gaulle, by artist Jean Cardot, a replica of the one on Paris’ Champs-Elysées. This one is prominently displayed on the first floor of the National Museum in Beijing. I have not seen any other foreigners so visibly lauded in China’s flagship museum, thus it’s quite an honor. Its photo is up top.

Then again, our neighbors’ lack of support for Argentina may have had a more mundane explanation. Possibly, everybody is a little sick and tired of Lionel Messi. At halftime, he was in every other ad, promoting the Chinese dairy company, Mengniu, along with potato chips, Pepsi, a Chinese herbal tea called Jialibao, and god knows what else. Portugal’s Cristiano Renaldo was also selling cars, sportswear and who knows what. I think it’s time for both of them to retire. De Gaulle had the good sense to quit Indochina. As went Dien Bien Phu, the writing is on the wall for these two gazillionaire footballers, who were clearly outclassed in this year’s World Cup.