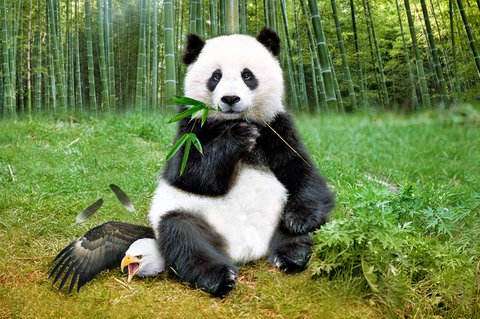 Pictured above: Badass Baba Beijing making America’s bald eagle feel the pain. The United States does not have bamboo forests. China has thousands of square kilometers of them. What’s an American eagle doing there? Uncle Sam, you’re out of range and outclassed in this neck of the woods. Time to dust off your feathers and get the heck out. Go home and take care of your own suffering people.


[dropcap] R [/dropcap]ussian President Vladimir Putin’s March 1, 2018 State of the Nation speech was historic (http://en.kremlin.ru/events/president/news/56957), during which he showed off his country’s latest missile and nuclear weapon technology. The West has nothing that comes close to what Russia stocks in its arsenal. Even a NATO member, Turkey, is buying Russia’s S-400 ground-to-air anti-missile system, over America’s version. Hell, everybody on Planet Earth and their dead uncle wants to buy the S-400! It’s so bad that the West has to buy their rocket engines from Russia, to launch their satellites (https://www.nbcnews.com/mach/space/why-does-u-s-use-russian-rockets-launch-its-satellites-n588526).

After Syria’s humiliating smackdown of NATO, Israel, their proxy terrorist ISIS and White Helmet armies, with the critical help of Russia and Iran, it is clear which country is the world’s real military superpower, and it is not spelled U-S-A.

But Mr. Putin didn’t need to tell you that. Anybody with a basic knowledge of military hardware knows that Russia has Planet Earth’s preeminent inventory and technology bragging rights, bar none. This is because Russia’s military industrial complex (MIC) is a healthy mix of state owned and private companies. Their corporate officers and employees are committed to protecting their country’s borders and keeping their citizens safe. In other words, they are patriots and nationalists first and making a profit comes second. There may be some corruption, but when you look at Russia’s annual military budget versus what they are producing, it cannot be more than some background noise (https://en.wikipedia.org/wiki/List_of_countries_by_military_expenditures).

Not so in Eurangloland. The West’s MIC exists first and foremost to loot trillions of dollars and euros onto weapon manufacturing corporations’ bottom lines, as well as pallets of dirty money into the back pockets of the tens of thousands of parasites who are sucking the public treasuries dry: senators, representatives, parliamentarians, government workers, lobbyists, consultants, shit shoveling media whores who write, blog and broadcast what they are told to publish, and the endless revolving door for military officers, who become instant millionaires when quitting their public service, to join in the private gang bang of their hapless citizens. The West definitely has socialism and it’s sure not for the masses.

Everybody in the West knows that their MIC is more corrupt than open sewers and ocean-sized septic tanks, bilking them out of trillions of their hard-earned taxes, yet they prefer to protest for and against transsexuals, guns and abortion. You gotta hand it to Eurangloland’s owners, they really know how to play their citizens with 24/7 Big Lie propaganda, identity politics, and the endless dribble of false flag mass shootings, bombings and Muslim-dark-skinned attacks, all the while robbing them blind and slowly impoverishing their nations into developing world status.

What is less talked about in the West’s presstitute media is China’s military technology capabilities. I’m not suggesting that China’s weapons are superior to Russia’s, but I am saying the United States would lose to the Chinese nation in a hot war. Like Russia, China’s MIC is first patriotic and nationalist. Not only that, but China has the visionary guidance of the Communist Party of China (CPC), with its long-term planning and strategies. Every member of the People’s Liberation Army (PLA) is a communist and I can assure that probably 99% of the MIC’s corporate officers and boards of directors are fire breathing CPC members too. China’s MIC is almost all state-owned, although Baba Beijing is letting more and more private firms get into the game, especially ones that have developed unique or cutting-edge technology.

Like Russia, China produces a dizzying array of weaponry for a fraction of NATO’s budget, suggesting that corruption is likely minimal (https://en.wikipedia.org/wiki/List_of_countries_by_military_expenditures). Not to mention that President Xi Jinping, a PLA officer himself, has cleaned house in the military, completely modernizing its structure along the lines of NATO (rapid reaction forces; smaller, more mobile units), while imprisoning, removing, demoting, disciplining and fining thousands of officers who got too fat and happy before Xi became supreme military commander in 2013.

In order to secure its geopolitical interests along it coast and in the South China Sea, with the US invading its waters and keeping important naval assets in Japan and Korea, Baba Beijing is building a blue water navy at blinding speed. How fast, you might ask? China has built 15 navy warships in just seven months, the kind of output not seen since the United States after Pearl Harbor (https://glblgeopolitics.wordpress.com/2018/07/19/chinese-naval-expansion-hits-high-gear-chinas-navy-acquires-15-warships-in-7-months/ and https://maps.southfront.org/chinese-naval-expansion-hits-high-gear-chinas-navy-acquires-15-warships-in-7-months/).

The PLA is at the cutting edge of using naval rail guns, something NATO admits they are behind on, and China may be ahead of the Russians for this important technology. (https://sputniknews.com/military/201802021061312636-china-flexes-electromagnetic-railgun-warship/ and http://en.people.cn/n3/2018/0316/c90000-9437799.html and http://www.nextbigfuture.com/2018/06/chinas-future-railgun-navy-2025-predicted-by-us-intelligence.html). Railguns use powerful electromagnetic energy to launch missiles at high speeds. No need for solid or liquid fuel.

China upped the ante, announcing it has just tested an electromagnetic rocket, something that is still on the drawing boards in the West (http://www.globaltimes.cn/content/1113596.shtml).

China already has a vast arsenal of advanced missiles (http://chinarising.puntopress.com/2015/09/04/from-may-9th-in-moscow-to-september-3rd-in-beijing-the-anti-west-order-comes-full-circle-moscow-beijing-express-on-the-saker-44-days-radio-sinoland/) and it is clear that like Russia, Baba Beijing is ahead of the West in hypersonic missiles (https://www.nextbigfuture.com/2017/11/hypersonic-wind-tunnel-test-model-of-chinas-hypersonic-vehicle-revealed.html and https://www.nextbigfuture.com/2018/02/china-moving-to-full-scale-hypersonic-missile-production-and-us-will-spend-about-10-billion-per-year-on-missile-defense.html and www.globaltimes.cn/content/1113980.shtml and http://www.scmp.com/news/china/society/article/2142011/start-your-engines-china-getting-ready-mass-produce-hypersonic).

This includes the DF21-D, dubbed the aircraft carrier killer. With the DF21-D’s 1,500km range, Uncle Sam has to keep its blue water navy 1,600km from China’s coast, thus making the 900km-range jet fighters on board totally useless. Some superpower…

China is giving NATO fits with its aviation programs, including the H-20 long range stealth bomber (https://www.popsci.com/explaining-chinas-big-bomber-plans and https://china-defense.blogspot.hk/2018/04/here-it-is-first-artists-impression-of.html and http://www.globaltimes.cn/content/1101430.shtml), as well as its stealth fighter jets (http://en.people.cn/n3/2018/0321/c90000-9440007.html).

In sum, Russia is king of the global military mountain, but China is more than anything that NATO could imagine throwing at it. While NATO tries to take down Russia and China in the geopolitical sphere, these two fraternal countries are cooperating closely on the military front, conducting exercises together, as far away as the Mediterranean and Black Seas (https://nationalinterest.org/blog/the-buzz/watch-out-china-russia-are-working-together-sea-15767). With everybody clamoring to get their hands on the much coveted S-400, China was early-on the first country to get the system in place (https://www.businessinsider.com/china-has-russian-s-400-air-defense-system-2018-5/).

Among Eurangloland’s elites, there are some voices of reason, questioning the delusional dream that the United States would send China to a quick and decisive defeat, if they got into a hot war. This article shows just some of the PLA’s underestimated arsenal (http://www.kiwireport.com/chinese-superweapons-changing-regional-balance/). America’s generals know that China would wipe out its Pacific fleet in a matter of days, if war broke out (https://www.newsweek.com/russia-china-would-destroy-us-command-aircraft-day-1-war-air-force-warns-937013). Rand, a private CIA-Department of State-Department of Defense geopolitical analysis group just came out with a report entitled, War with China (https://www.rand.org/pubs/research_reports/RR1140.html). It admits that PLA’s improving military might is on such a scale as to make going to war with China unthinkable (https://www.rand.org/blog/2016/08/qa-an-unthinkable-war-between-the-us-and-china.html).

So, go ahead and say it: the United States is not humanity’s sole superpower, neither economically, nor militarily. There now, that wasn’t so hard, was it?