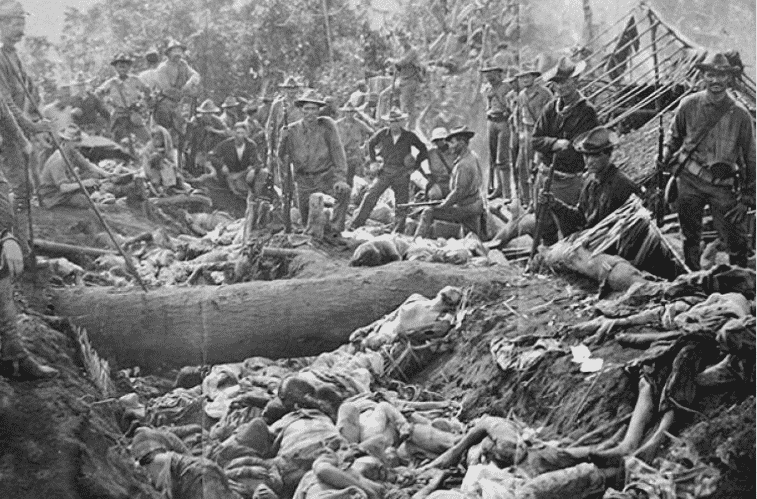 Pictured above: US soldiers showing off their exterminated Philippine “trophies”, following their Moro Massacre in 1906. All told, to conquer the valiant and indefatigable islanders, Americans conducted a bloodthirsty, racist, 14-year campaign of genocide, 1899-1913, killing 1,250,000 national citizens (http://chinarising.puntopress.com/2017/10/19/china-thailand-cambodia-and-the-philippines-say-f-u-to-western-colonialism-china-rising-radio-sinoland-171019/). Across America’s global empire, every day is My Lai (http://chinarising.puntopress.com/2018/03/17/wilfred-burchett-explains-why-like-all-good-fascists-every-day-is-my-lai-for-americans-china-rising-radio-sinoland-180319/).

“Every ambitious would-be empire clarions it abroad that she is conquering the world to bring it peace, security and freedom, and is sacrificing her sons only for the most noble and humanitarian purposes. That is a lie, and it is an ancient lie, yet generations still rise and believe it! …   If America ever does seek Empire, and most nations do, then planned reforms in our domestic life will be abandoned, States Rights will be abolished — in order to impose a centralized government upon us for the purpose of internal repudiation of freedom, and adventures abroad.  The American Dream will then die — on battlefields all over the world — and a nation conceived in liberty will destroy liberty for Americans and impose tyranny on subject nations.”

How prescient was Mr. Boutwell? Just look at the United States since its founding, and he nailed American empire to a “T”. Everything he predicted was already coming true and only getting worse by the day and counting.

George Orwell also echoed the exact same nightmare. The savagery, brutality and genocide of imperial colonialism must always be imported back to the home country, to keep the masses suppressed and obedient. He wrote about it in his first fiction book, Burmese Days (https://www.goodreads.com/book/show/9650.Burmese_Days), based on his real life experience of being a policeman for the British Raj, so he lived its murderous cruelty, corruption, plunder and racism on the front lines of terror. Orwell expounded upon the theme in later writings.

At least the British, French and other European countries admitted to their imperialism and colonialism. Americans are in total denial about their violent history, past and ongoing. Empire? What empire?

I have not read Mr. Boutwell’s works, but this one quote alone is priceless. For the record, here they are, free of charge,