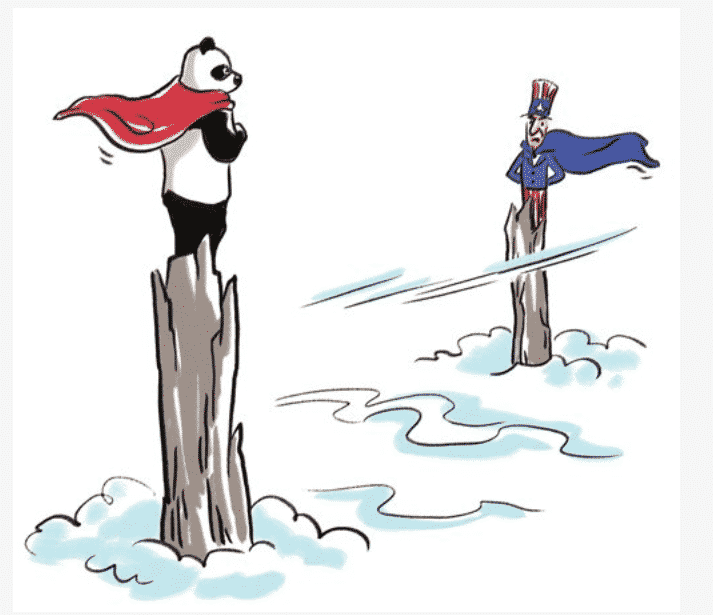 Pictured above: it is not a question of which side has good or bad leaders. It’s all about the difference in civilizational systems of governance.

At least US President Donald Trump is honest and his administration is reflecting that reality, when he said,

People say you don’t like China. No, I love them… But their leaders are much smarter than our leaders… It’s like taking the New England Patriots and Tom Brady and have them play your high school football team. That’s the difference between China’s leaders and our leaders (https://www.youtube.com/watch?v=e0GhBmz3zmE).

America’s owners gave away the manufacturing store to China, starting in the 1980s, gutting the United States’ middle class and turning its already Potemkin labor unions into eunuchs. This was all for the capitalist sake of quarterly profits, multimillion-dollar executive payouts and golden parachutes. There is even a word for it, corporate financialization, where the company is managed by the CEO to maximize the stock price, in order to reap the biggest salary possible. GM is a good example, but it’s true of much of Wall Street, for the last 40 years (https://www.salon.com/2018/12/05/general-motors-is-proof-to-the-world-that-slashing-wages-is-not-the-ticket-to-profitability_partner/).

In spite of all the well-orchestrated mainstream propaganda about “keeping all the high paying white collar jobs”, history has shown that manufacturing always draws research and development (R&D), technology, innovation and financing into its orbit. The US, and now more and more Europe, Japan and South Korea depend on China as the world’s manufacturing powerhouse. Thus, all of Trump’s invectives about trying to bring jobs back home, the MAGA movement (Make America Great Again) make sense. However, it will never happen, because he doesn’t run the country. Wall Street, the oil bankers and the military-spy deep state do, and they own the US Congresspeople and Senators like wall trophies, all well-bribed, extorted and blackmailed.

Since capitalism cannot compete against communism-socialism on a level playing field, the former’s only options are to commit sabotage, war, sanctions and subterfuge to weaken the latter. Chas Freeman calls “positive” Western diplomatic relations, alliance, entente, protectorate, client state and cooperative transactional relations and none of them are good for the West’s other half (https://chasfreeman.net/a-new-era-in-us-china-relations/), as they all mean subordination of the country’s needs to those of the United States. On the negative side there are, enmity, adversarial antagonism, rivalry, and competitive transactionalism. Again, none of them are good for countries that want to be independent of the West, and with Donald Trump’s policies, the US has rapidly moved its relations with China from adversarial antagonism/rivalry back to enmity, which means trying to destroy China, along with a long list of other perceived enemies.

Thus, after Trump slapped high tariffs on China’s exports, US Vice-President Pence gave a speech to announce to the world that the United States was ready for all-out Cold War, unless China submits to all of Uncle Sam’s demands, like a good poodle (https://www.rt.com/usa/443911-pence-cold-war-china/ and https://www.telesurenglish.net/news/VP-Mike-Pence-US-Will-Increase-Tariffs-Until-China-Conforms-20181117-0005.html). This hostility and extortion were declared at the Asia-Pacific Economic Cooperation (APEC) summit in Papua New Guinea. This, while China’s President Xi Jinping was living up the summit’s name, economic cooperation (https://www.presstv.com/Detail/2018/11/17/580265/China-President-Xi-Jinping-US-vice-president-Mike-Pence-APEC-summit-trade-policy–Belt-and-Road-Initiative-BRI). The US should be disinvited to future APEC summits, as it only goes there to divide and conquer, not build bridges and mutually beneficial cooperation, like the other 20 participants.

To add desperate fuel to the imperial fires, the US Secretary of State, Mike Pompeo gave a policy speech in Brussels, home of Yankee prostitutes NATO and EU. Give Trump and his administration credit: they openly tell all the world what used to be conducted behind diplomatic doors, including extortion. Pompeo said that the entire Planet must submit to Uncle Sam’s imperial order, and not side with China or Russia (https://www.rt.com/news/445731-new-pax-americana-pompeo/).

The writing is on the wall. Since 1949, Communist-socialist China has been rising and offering the whole world a cooperative, win-win, multipolar vision of global governance, with the Belt and Road Initiative (BRI) as its backbone (http://chinarising.puntopress.com/2018/02/13/us-sending-1000s-of-marines-to-asia-to-stop-chinas-belt-and-road-system-china-rising-radio-sinoland-180213/). The imperial-capitalist West, with Uncle Sam calling the shots, has no viable answer to Baba Beijing’s century-spanning vision, so it can only do what it does best: invasions, war, occupation, color revolutions, sanctions, boycotts, extortion, bribery, blackmail and assassinations. It has worked most of the time for the last 3,000 years, starting with the Greeks and Romans, then onto the Crusades and global colonialism, which is still ongoing.

However, after a mere blip of 110 years of being able to rape and plunder China, starting with the Opium Wars in 1839, until Communist liberation in 1949, China has resumed its rightful place on the world’s geopolitical and economic map. Remember, until Britain ransacked and destroyed the economies of China and India in the 19th century, those two countries each had 25% of the Planet’s GDP, with the UK having 2%. English colonialism reversed those numbers in just one generation for India and two generations for China.

It is historical normalcy that China be the biggest global economy, as it was that way for millennia, excepting imperial-colonial conquest during the 19th and 20th centuries. All the West’s anti-Chinese sanctions, tariffs, blockades and extortion may slow Baba Beijing down a tad, but in all honesty, it’s already game over and there is not a damn thing Washington, London and Paris can do to stop it from only getting back to the “new” same old same old.

I repeat, it’s not a question of leaders, it’s all about civilizational systems of governance, going back thousands of years.