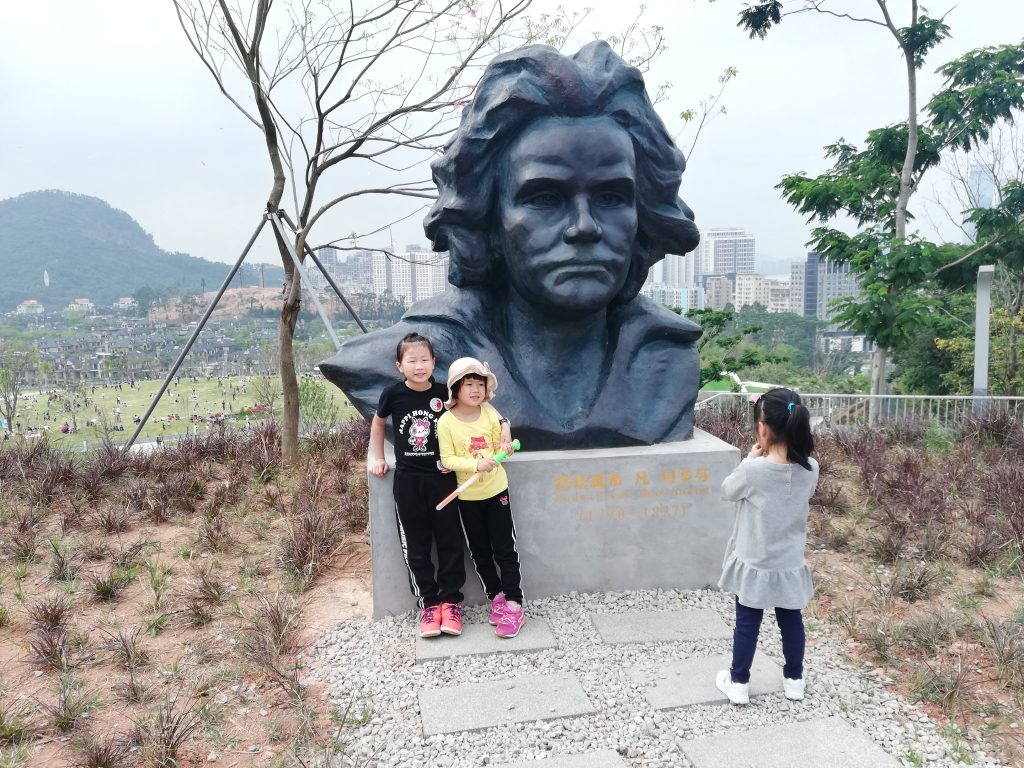 Pictured above: an enormous bronze bust of Ludwig von Beethoven, at the top of the overlook peak in Shenzhen’s newest public venue, Baishilong Music Park, which means White Rock Dragon.

As I reported recently, Shenzhen is busily living up to its 2020 goal of being a 1,000-Park City (https://chinarising.puntopress.com/2019/03/07/60-seconds-over-sinoland-shenzhens-economy-beats-hong-kongs-dont-even-ask-me-about-quality-of-life/). It’s latest big addition to the public park roster is the Baishilong Music Park, just a few hundred meters from its eponymous metro stop on Line 4.

When I went, I thought it would be full of people playing music in groups, like seen in so many public parks in China. If you can read sheet music, play any instrument and/or sing, you are welcome to join in these ad hoc groups. These performances always draw a passing crowd and are famous for playing Red Music, meaning songs about China’s communist-socialist revolution. These pieces extol Mao Zedong and the country’s long and arduous fight for liberation, from the colonial-capitalist-drug cartel grip of the West, the imperial occupation of Japan and the fascist traitors of Chiang Kai-Shek’s KMT.

But, that didn’t happen. Instead, Baishilong Park was music-themed, with motifs everywhere to remind you of the art. At the entrance was a tall, circular, multicolored name sign, shaped like a sheet music clef. Inside there was a funky mixture of about ten large statues. As you enter the place there were stainless steel statues of a free-standing lute and a woman playing a flute, above surrounding water ponds, both in the socialist art style. Another was a huge bronze bust of Ludwig von Beethoven, which sat atop the tall overlook that takes in the whole park. Another was a cool looking statue of a freestanding saxophone, with just a man’s mask face blowing into it and his two suspended-in-air hands playing the notes. There was a big red bridge shaped like the scales of music notes. There was a massive gramophone with a quirky mixture of Chinese and English words making up its sound cone. There was a second, smaller observation deck with a strange looking omega shaped structure. It was not well thought out, as they had to block off the two bases. I imagine it was too irresistible for skateboarders, roller skaters and parkour enthusiasts to fly up and down on it, and potentially dangerous.

All of that was very modern. Then there were two classical bronze statues, one of an old man playing the zither, or Chinese guqin and nearby, another man leaning towards him, listening in musical rapture.

Unlike most other public parks in China, Baishilong had a comparative dearth of trees, shrubs and flowers. It appeared to be intentionally wide open, with large, Bermuda grass covered lawns, upon which many hundreds of locals were sitting as couples or families, talking, snoozing, eating and taking photos. Because it was so wide open, there were many people flying small kites in the gentle, winter-warm breeze. There was a large white sand park, which was overrun with children and parents playing inside. Right next to it was a modern series of interconnected sound tubes, into which kids were singing, talking and shouting, hearing each other’s responding echoes.

The overlook stairs up and down were very modern, in stainless steel and the side walls made up of scrap pieces of granite flooring, encased in iron cages. Atop offered a great view of the area, including across the big boulevard in front, facing Jiaoye Park (means countryside), a huge, forested mountain area with its tall Jigongtou Peak (means rooster head). In fact, Jiaoye Park is a continuation of Tanglang Mountain Park (Tanglang means pond + a number of different possible translations), which is just catty-corner to where we live.

While not revolutionary songs, I did get to listen to some music. Along several of the walking paths were ground level speakers playing a kind of new age Chinese music, with dramatic, classical overtones, which was quite interesting. But it lacked the humanity of a gangly bunch of amateur locals showing up and in motley fashion, belting out The East Is Red and I Love Beijing Tiananmen, mostly in tune.

I can’t say I was wild about Baishilong Music Park, with its wide-open spaces and mishmash of modern and classical tropes. But clearly, the neighborhood government built what the citizens wanted, undoubtedly after numerous surveys, which is how Chinese democracy works (http://chinarising.puntopress.com/2018/07/27/vaccine-scandal-shows-just-how-democratic-and-participatory-is-chinas-democracy-china-rising-radio-sinoland-180727/ and https://chinarising.puntopress.com/2019/01/19/we-decided-that-xi-is-our-president-chinas-participatory-and-petitioning-democracy-succeeds-online-china-rising-radio-sinoland-190119/). As the photo gallery and short clips below show, Chinese are gaga about music. Citizens were enjoying getting out of their – by Western standards – comparatively small apartments and being in wide open air, with a big sky above their heads, surrounded by musical motifs and accompanied by family, friends and lovers.