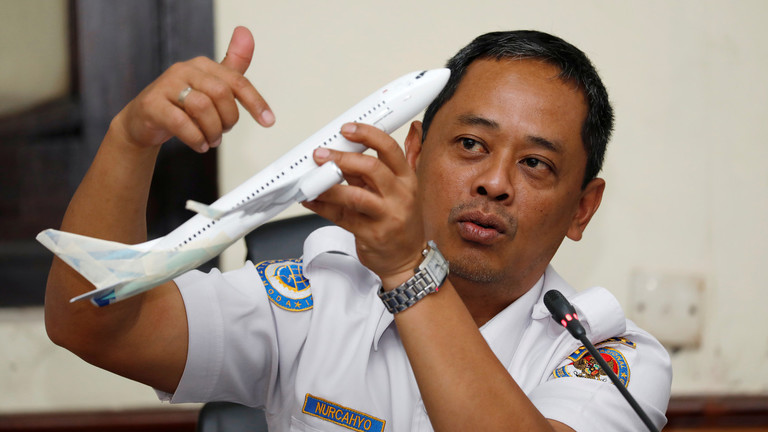 Pictured above: if you don’t want to crash your Boeing 737 Max 8 plane into a nose dive, you have to pay for two extra instrument add-ons! This is the psychopathic logic of capitalism and it is the 800-pound gorilla on the world stage that no one wants to talk about, with its never-ending cruelty, corruption, criminality and cronyism. This Indonesian transport official was explaining why the Lion Air plane crashed into the sea.

The incredibly cruel, corrupt, criminal history of the West’s crony capitalism, concerning the death of two- hundred-seventy-one innocents, in a pair of totally avoidable Boeing plane crashes, tells you everything you need to know about the mirage of Adam Smith’s “invisible hand” and his even more mythical “free markets”. To call capitalism cruel, corrupt, criminal and crony is to repeat yourself five times. It’s all one, big hell-on-earth chainsaw of genocide, slavery, resource theft and war. Capitalism is incapable of surviving any other way.

Two Boeing 737 Max 8 planes went down, one Indonesia’s Lion Air and just recently, the other one was Ethiopian Air. Their tragic demises were almost identical in nature and credible reports came out that a “stalling software override” problem had long been well-known at Boeing, and very likely at FAA too, but in the name of capitalist greed, it was suppressed. Moon of Alabama completely exposed this crony capitalist horror show in blow by blow, evil detail (https://www.moonofalabama.org/2019/03/boeing-the-faa-and-why-two-737-max-planes-crashed.html and https://www.moonofalabama.org/2019/03/flawed-safety-analysis-failed-oversight-why-two-737-max-planes-crashed.html). The romantic sounding “laissez-faire” economics (it is French, meaning just let things take their course, come what may) is neoliberal propaganda brainwash for open season to lie, steal, rape and kill for individual profit.

FAA continued to whore for Boeing, insisting the plane was safe, thus endangering the lives of thousands of passengers (https://www.businessinsider.com/faa-says-boeing-737-max-8-is-safe-fly-despite-deadly-crashes-2019-3). This while everybody around the world, and China was one of the first, started grounding all their Boeing 737 Max 8 planes, but not the US and Canada (https://www.rt.com/business/454051-safety-or-cash-boeing-dilemma/ and https://edition.cnn.com/2019/03/12/africa/airlines-suspend-boeing-flights-intl/index.html) . Finally, with so much victims’ blood splattered over Uncle Sam’s face and hands, Trump intervened, shut it down in the US and called for an FBI investigation (https://www.mercurynews.com/2019/03/13/breaking-trump-grounds-boeing-737-max-8-and-9-airplanes/ and https://www.rt.com/usa/454344-fbi-faa-boeing-737-probe-crash/), the latter you know will be a total whitewash. Why? Crony capitalism works because it pays for the endless revolving doors between capitalism and government, where companies write the laws and then bribe and extort legislatures and courts to vote for them. Trump no sooner nominated a corporate yes-man to head up the FAA, a former Delta Airlines executive (https://www.rt.com/usa/454252-trump-names-faa-chief-boeing/). Above the level of mom and pop businesses, which I fully endorse, capitalism cannot function any other way.

To crown the pathological drive of profits over people and the planet, it was later discovered that if a Boeing customer wanted the instrumentation necessary to keep the 737 Max 8 from crashing, they had to pay for two extra add-ons (https://www.rt.com/news/454489-boeing-737-max-optional-extras/)! If you find this shocking, then you are brainwashed about capitalism and need to get smarter, before all of humanity is destroyed by it.

And of course like all over the neoliberal world, no one at Boeing and FAA has been arrested or resigned. The West’s psychopaths still run the show. Capitalism and accountability have always been a deadly oxymoron.

Not so in communist-socialist China. Every time there is a natural or humanmade disaster, those government and business people involved are immediately on the hook. For humanmade accidents, CEOs, officers, high-level managers, as well as those on the ground, and even board members are rounded up for questioning. If there is even a whiff of malfeasance, they are kept locked up, or restricted to house arrest, until an investigation is conducted. If they are charged with mismanagement, neglect or corruption, they are going to stand trial and if found guilty, they can lose their jobs, get kicked out of the Communist Party of China (CPC), pay fines, do prison time or even face execution if lives were lost and/or many people injured.

I wrote about this in detail in The China Trilogy (see below), about how tens of people did hard time for the melamine milk scandal here and war between national milk producers, Yili and Mengniu. Tens of people did hard time and several got a bullet in the back of their heads. I compared it to the Vioxx scandal in the West, which killed up to 500,000 victims, no apologies were given and management got huge bonuses for all the money they made for Monsanto and Pfizer. They are heroes on Wall Street and capitalist role models for the Fortune 500.

I also wrote about the recent vaccine scandal in China. Baba Beijing immediately swung into action, putting the world’s most functioning, participatory democracy to work (http://chinarising.puntopress.com/2018/07/27/vaccine-scandal-shows-just-how-democratic-and-participatory-is-chinas-democracy-china-rising-radio-sinoland-180727/). Accountability and communism-socialism are synonyms.

Wang Zhiqing is a CPC member and has a BS in Engineering (http://www.caac.gov.cn/en/GYMH/LDJS/WZQ/). Lyu Erxue got his Master ‘s Degree from the Party School of the Central Committee of the CPC. This means he’s the person in charge to make sure everybody at CAAC keeps their noses and bank accounts clean, to live and work by Mao Zedong’s timeless motto, Serve the People (http://www.caac.gov.cn/en/GYMH/LDJS/Lex/). All of them have lifelong careers doing just that, spending decades meritocratically earning their way to top-level management positions that concern the safety of millions of travelers.

I don’t know about you, but I’d rather have these guys overseeing China’s airlines and airways, and not a snake pit full of corrupt whores from Wall Street, hired from the very same companies they are supposed to monitor. I know Baba Beijing puts people’s safety over profit. I have friends who are pilots for Chinese airlines. They laugh about how many millions of liters of jet fuel are wasted in China, during take-offs and landings, because the national protocol is so conservative and slow. No one can argue about China’s flight safety record, which is one of the best in the world. This is because Baba Beijing is not infested with thousands of corporate lobbies and is not being bribed and extorted to pass “laws” written by the “regulated” corporations, to maximize profits at the cost of countless human lives and the desecration of Mother Earth.