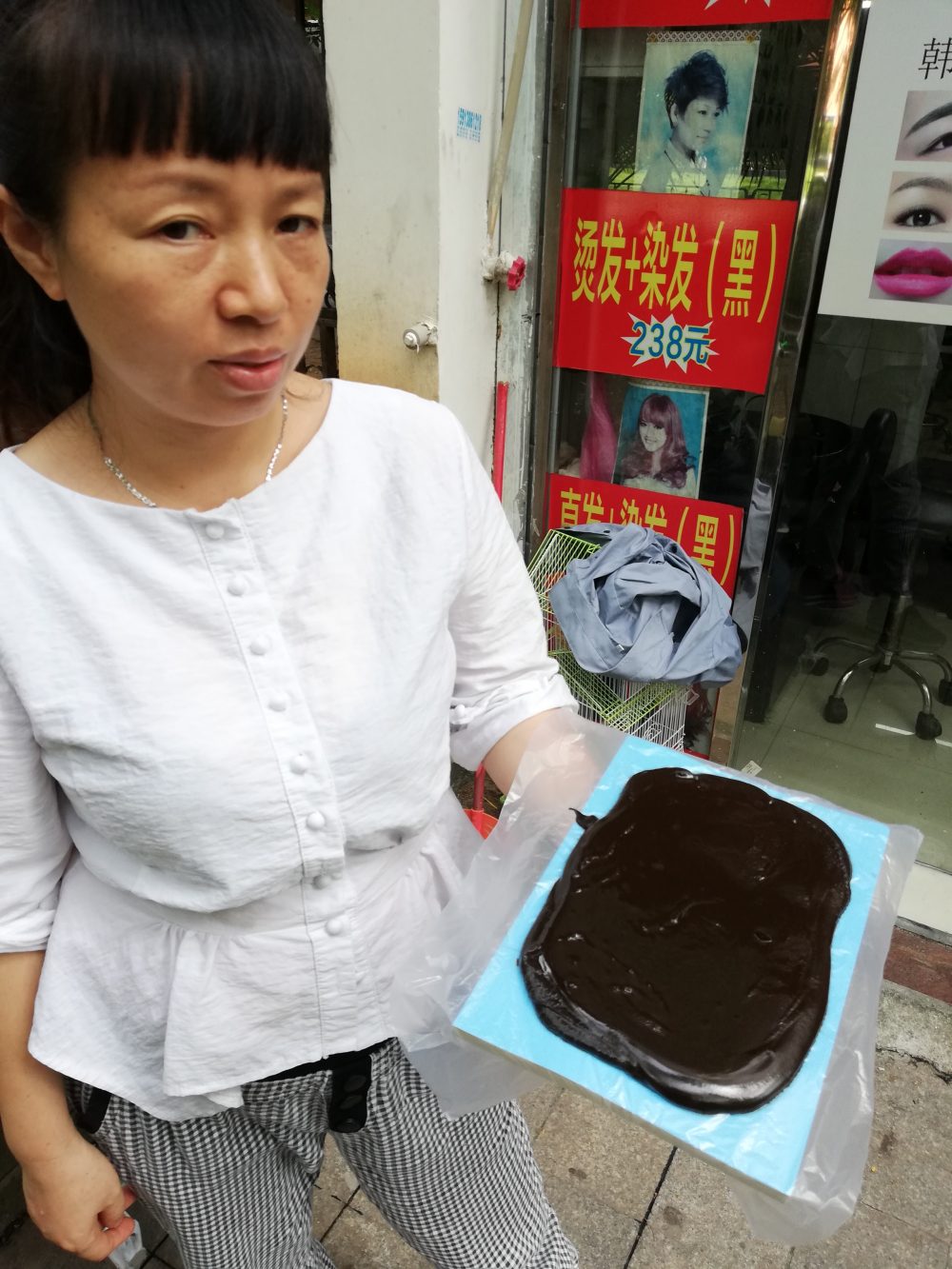 Pictured above: you don’t have to go far to see TCM (Traditional Chinese Medicine) being used in the Chinese’s daily life. I saw our landlady making a big herbal salve. She cooked it into a thick paste and was cooling it down outside. She said it works great for any sore spot on the body and can also be eaten. She was going to put it on her young son’s abdomen, to soak in and stop his stomachache. A combo TCM-allopathic pharmacy is just down the street and others are nearby. Five minutes from us is a pure TCM pharmacy.

Having lived in China 16 years over two periods, starting in 1990,  I have seen a sea change in attitudes about Traditional Chinese Medicine (TCM).

In the 1990s and when we came back in 2010, I can surprisingly say that in urban China, perceptions about TCM were largely negative. This was somewhat true in rural areas, but to a much less extent. There was a prevailing attitude that TCM was ineffective, old fashioned and Western allopathic medical care was superior.

During the Mao Era, 1949-1978, China made such incredible gains in popularizing medical care across the countryside. In 1949, life expectancy in colonized, Western exploited and (imported from the UK and US) drug-addicted China was around 35 years of age, a shocking and sobering statistic for any country to swallow. By 1978, it rocketed to 65 years of age, with China’s groundbreaking barefoot doctor program (which as a model revolutionized medical care around the world), national vaccination programs and hundreds of thousands of clinics and hospitals built to the four corners.

During the Mao Era, TCM was widely promoted in rural areas, less so in the cities, especially as time went on. At the same time, China rapidly developed allopathic drugs, antibiotics, modern surgeries, intensive care and all the various specialties, like Ear, Nose and Throat; Orthopedics and Pediatrics. Given the geopolitical landscape during the Cold War, I think China was smitten with a little, “we can be just as good as you-itis”, when it came to medical care, and that meant using Western medicine.  At the same time, the Mao Era was also working hard to teach to Chinese to reject “old ideas” that held back their human potential, like dogmatic Confucism, elite education, and ivory tower thinking. I can appreciate the geo-socio-political gambit, but it is too bad that TCM became branded as inferior and ineffective in the process, and that Western medicine was “modern” and “better”.

There are regional differences. TCM is much more popular in Southern China than in the North, and it goes without saying, rural folk like their millennial cures more than city slickers. I have definitely noticed a healthy amount of urban snobbism, We educated, sophisticated big city geniuses are way beyond that crappy old TCM.

When the barefoot doctors hit the hills and mountains of China, TCM, first aid, traditional cures, basic Western medicines (analgesics, some antibiotics, etc.) and preventive medicine/sanitation were all they had, but it still transformed the people. They even developed an indigenous esophageal cancer screener and with early detection, saved thousands of people from this disease. Barefoot doctors were on the front lines to help eradicate tuberculosis, smallpox, polio, schistosomiasis (about which Mao wrote a poem, Saying Goodbye to the God of Disease #1), digestive worms, internal and external parasites, as well as helping to control venereal diseases. They saved uncountable tens of millions of lives and greatly extended their lives.

As China’s Western medical infrastructure expanded deeper into remote areas of China, these heroes of the communist revolution became more marginalized. This, while they were lauded by the World Health Organization (WHO), United Nations (UN) and medical bodies all over the West, including the US. However, because China’s barefoot doctors were often students and peasants, I think this caused a negative association in the minds of the people here: those simple, basic-trained barefoot doctors and TCM were one and the same.

When we moved from Beijing to Shenzhen in 2016, Hong Kong’s sister city, I was stunned to see so many pharmacies offering TCM. They are few and far between in the north, with a very famous TCM pharmacy called Beijing Tongrentang positioning stores strategically around the capital and other big cities, along with a few other competitors. But, in Shenzhen, there are more TCM pharmacies and combined TCM-allopathic pharmacies, just in our neighborhood, than in a big swath of Beijing. As we started traveling more around Southern China, I quickly noticed the frequency of TCM in pharmacies along the way.

This TCM-allopathy divide started to change in 2010-2011, when Baba Beijing began to roll out universal health care to all 1.4 billion citizens. TCM got a big push, since it is much less expensive in cost and still widely used, especially in rural areas, where most of the citizens lived.

As soon as Xi Jinping was elected president in 2013, he began to talk about not forgetting TCM, to stay healthy and get well. Whenever he talks about the health industry here, he invariably promotes TCM, like in this policy speech in 2016 (http://english.cri.cn/12394/2016/08/20/3561s938024.htm). What he said then is a common refrain whenever XJP talks about national health issues,

The president particularly stressed the role of traditional Chinese medicine (TCM) in promoting people’s health, underlining innovation as well as coordinated and complementary development of TCM and Western medicine.

President Xi promoted a national TCM law to codify its licensing and practice in China, which was passed in 2017 (http://www.globaltimes.cn/content/1112959.shtml). By 2018 and under this new legislation, there were over 3,000 registered TCM clinics in China. To bring public recognition to TCM and its doctors, Baba Beijing began awarding prizes and citations to outstanding practitioners and clinics, just like is done in allopathic medicine (http://english.cri.cn/12394/2016/11/17/2281s945121.htm).

Xi Jinping continues to include TCM in his in-country tours and policy speeches. Baba  Beijing sees huge possibilities for TCM technology, innovation, research and development, and with that, millions of good paying jobs for university graduates, while improving the quality of life for the whole nation. China also sees tremendous market potential outside the country, to export medicines, instruments, equipment, knowhow and TCM-tech, not to mention it doubles as beneficial Chinese cultural soft power (http://chinaplus.cri.cn/news/china/9/20181023/199482.html).