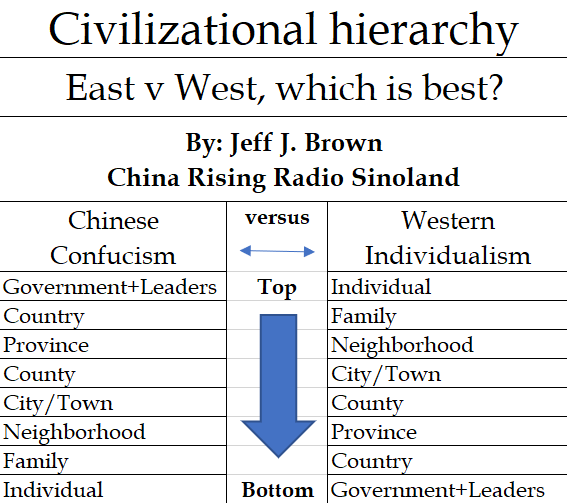 Pictured above: no wonder Chinese and Westerners don’t understand each other. They look at the world and their societies with diametrically opposed points of view. It’s like two peoples staring at each other through the opposite ends of a telescope. Everything is distorted. To paraphrase the great American poet Robert Frost, “And that my friends, makes all the difference”.


Note before starting: if you have not already done so, reading/listening to/watching my two recent posts comparing Chinese and Western governance will make this one much more meaningful (https://chinarising.puntopress.com/2019/07/30/why-are-western-leaders-gawd-awful-bad-and-chinas-so-darn-competent-part-i-china-rising-radio-sinoland-190730/ and https://chinarising.puntopress.com/2019/08/07/why-are-western-leaders-gawd-awful-bad-and-chinas-so-darn-competent%ef%bc%9fpart-ii-china-rising-radio-sinoland-190807/).

Westerners can live and work in China for years and not see the obvious. I should know, since I was one of them. We occidentals are so brainwashed from birth, at home, in school, by government, media and advertising of our moral superiority over all those “other” dark skinned kinda-sorta people, that it’s easy to not see the trees in the proverbial forest of life. This is how I was, when living here from 1990-1997. Even after living and working for 21 years outside the US, mostly in Africa, Middle East and China, I was still blinded by my racism of Western cultural and moral superiority, a liberaloid do-gooder, wrapped up in identity politics, thinking I was better than most of my less cosmopolitan countrymen – sad to say – and I wasn’t much better. It was not until we came back to China in 2010 that the scales of racism finally fell from my eyes. This painful and humbling, but ultimately liberating experience is tracked through the three books of The China Trilogy (see below).

Looking at the above comparative chart and going back to the times of the Ancient Greeks, the quintessential Marlboro Man has been the fixture of Western civilization. Me, myself and I, free and unfettered, independent and on one’s own, to decide one’s destiny. Being an adventurer and warrior/gunslinger also fits the bill. Greek tales like Jason and the Argonauts, Iliad and the Odyssey and the swashbuckling myths of the deities slaughtering monsters (today’s inferior Dreaded Others) all extol the virtues of Solo Man.

Family comes next and even that is often contested and dysfunctional in the West. Help out a family member? Maybe, maybe not. It seems like every Western family I’ve ever gotten to know well, starting with mine, is rife with communication and contact between members cut off. Individual peeves and grudges trump trying to keep the family intact.

Working our way down this civilizational hierarchy, support for the neighborhood, city, province and country can happen, but frequently on “my terms” and “not in my backyard”. How dare you encroach on my freedoms! This, while citizens can be easily brainwashed with God and the flag, to fight in endless wars for rape, resources and plunder, with the price over the long term eventually being societal collapse.

For millennia, at the bottom of the Western shit heap is the government and leaders. You can’t blame Euranglolanders for not trusting or respecting their governments, since they usually act like gangsters stealing from the 99%, while sending the latter to die likes dogs in wars of expansion, exploitation and extraction, all to enrich their elite 1% masters. Organized criminals posing as leaders and governments masking cartels is standard operating procedure. It’s happening while I write.

Yet, in spite of all the pitfalls, it’s easy to see why the Western hierarchy of Solo Man is so intoxicating and flattering. What could be more important than… ME! One’s horizon in life is simplified. Me, myself and I concentrate the need and take complexity and nuance out of the equation. Life become linear, point A to point B. I’ll do whatever the hell I want, Bubba. Get back Jojo, it’s my space. Get outta of my way, this is MY lane! A friend in need is fucked indeed. What’s in it for me? The world is my oyster. Of course, I should be able wear a gun around town to protect myself. I’ve got individual rights. Ayn Rand’s “rational self-interest”. Gordon Gekko’s greed is not just good, greed is God. What’s mine is mine and what’s yours in mine, so you’re screwed. Might and treachery make right. Finders keepers losers weepers. Laissez-faire, bay-bee. Dog eat dog, the big dominate the little, the rich steal from the poor. Being entertained and amused becomes paramount. Mass production and super-consumption are in. More, more, more. Making personal sacrifices is decidedly uncool, as is delayed gratification. It is easy to see why the Western paradigm of Marlboro Man dovetails so perfectly with capitalism, neoliberalism and colonialism.

Now, in China, flip the West’s social hierarchy upside down. Suddenly, you are no longer Mr. and Mrs. Me. Welcome to being at the very bottom of civilization’s needs. Look up and your life is no longer simple and linear, but complex and elliptical – a tapestry of interconnections and expectations. Just in the family alone, Mom’s, Dad’s and Grandparents’ needs trump yours. Older relatives too. What’s mine is also my family’s. If you slack off, then how is the family supposed to help take care of the neighborhood? We all want to live in a nice town/city, don’t we, and you’re the start. Daily life becomes very intricate, cyclical and circular, giving and taking. This is not my lane, but everyone else’s too. Since life is so interwoven and interdependent, solidarity in helping others becomes the ideal. Suddenly, social harmony and peaceful coexistence are everything. You mean I have to share? I have many responsibilities to my community and country? You mean I should help the government and our leaders to work effectively, and keep the nation intact and prosperous? You bet your stinky tofu, you do.

It’s easy to see that being a Chinese citizen is a much bigger daily responsibility and the expectations of the many over the wants of the individual are so much greater than in Western civilization. Euranglolanders often feel superior over Chinese families, when they see young children here being loud, boisterous and spoiled rotten. They are for a few years. It’s the one time in their lives when they get to enjoy some of that Solo Man Me, Myself and I, because by the time they get first grade in school, China’s civilizational hierarchy starts to kick in and the expectations of everyone around them begin to weigh on their societal shoulders. For five or six years, they get to run wild a little bit, now it’s time to knuckle down and take their place on the bottom rung of the ladder.

Since you are on the hook for family, the country’s leaders and government, attributes like frugality and delayed gratification become the ideal. No wonder the Chinese have the highest savings rate of any large economy in the world. Even though buying personal gizmos and luxuries has never been higher, and Baba Beijing is exhorting the masses to consume more, to counteract the US’s tariff trade war, China’s savings rate is still 46% (https://www.ceicdata.com/en/indicator/china/gross-savings-rate). This compares to Americans’ 17% (https://www.ceicdata.com/en/indicator/united-states/gross-savings-rate).

All in the family. Since everybody collectively is more important than you, is it any wonder that China is a communist-socialist civilization and always has been?

It goes without saying that the two above portrayed hierarchies are meant to be painted black and white, to show the overarching contrast. Of course, there are generous, giving Westerners who believe in social solidarity and economic justice. As well, there are Chinese who are selfish, greedy and heartless. Yes, there are family feuds and estranged relatives. That’s not the point. The point is the diametrically opposed societal expectations and ideals that are held up for inspiration and guidance. In the West, it’s all about individualism and personal freedom. In China, it’s all about Mom, Dad, the mayor, governor, prime minister and president who come first.

And that, my friends, makes all the difference. The imperial West shattered China’s civilizational hierarchy for 110 years, when it flooded the country with opium, morphine and heroin, 1839-1949, and was able to rape and plunder the people with lustful abandon. Since communist liberation in 1949, China’s social hierarchy has been restored. Look at the comparative table at the beginning of this article one more time and ask yourself, Which country is going to succeed and prosper on the world stage, into the 22nd century?

I’ll give you three guesses and the first two don’t count.

9 thoughts on “Upside down or right side up? Comparing Chinese vs. Western civilizational hierarchies. China Rising Radio Sinoland 190814”