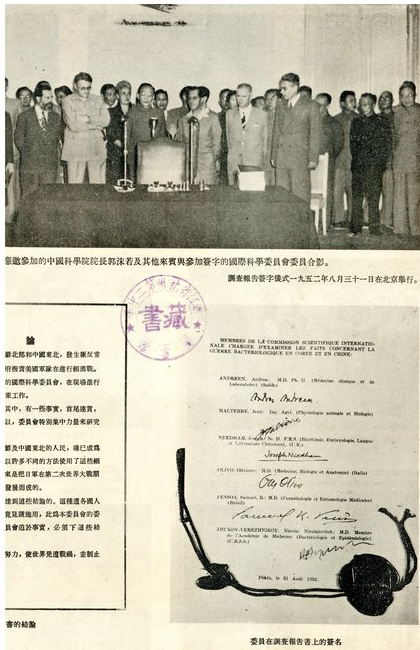 The International Scientific Commission members on top, in 1952, at their report’s signing ceremony, with the sealed signatures of the six eminent researchers, below. Dr. Joseph Needham is the tall man wearing glasses on the left. Sorry to say, but yes, the United States widely used germ warfare in China and North Korea, during the Korean War, as well as elsewhere, up to today’s headlines and counting. I wrote a couple of big chapters on the subject in The China Trilogy (see below).


The Bioweapon Truth Commission (BWTC-www.bioweapontruth.com) just added two excellent articles to its Global Online Library (GOL), concerning the renowned scientist and Sinologue, Dr. Joseph Needham. He headed the 1952 International Scientific Research Commission Report (ISC Report, also in the GOL in English and Chinese). Suppressed, blocked and censored for 70 years until its full inclusion in the BWTC-GOL, its 550 pages conclusively prove the United States widely used germ warfare in North Korea and China. This was in the hopes of exterminating millions of communists on both sides of the border, since they were beating the pants off the Allied forces. This led to his stellar reputation, as one of the leading intellectuals of his generation, to be destroyed by the West’s Big Lie Propaganda Machine (BLPM). One of the articles is entitled, “Joseph Needham as a Modern Day Galileo”, which speaks volumes of his historical stature and importance, as well as the vicious persecution against him by the ruling elites. Don’t fall for the official media lies and books like Simon Winchester’s “The Man Who Loved China”. Unlike Galileo, Needham never backed down on the ISC Report’s validity, proof and rock solid evidence, nor did the other members. The GOL has the proof, a signed letter from Needham to Wilfred Burchett. Look in the latter’s GOL directory to see it (link to GOL below).

Take a few minutes to learn about one of the towering figures of the 20th century. The BWTC-GOL can be accessed via the link below. Look in the directory for Joseph Needham,

One thought on “Joseph Needham was one of 20th century’s greatest scientists and Sinologues you never heard of. China Rising Radio Sinoland 190927”