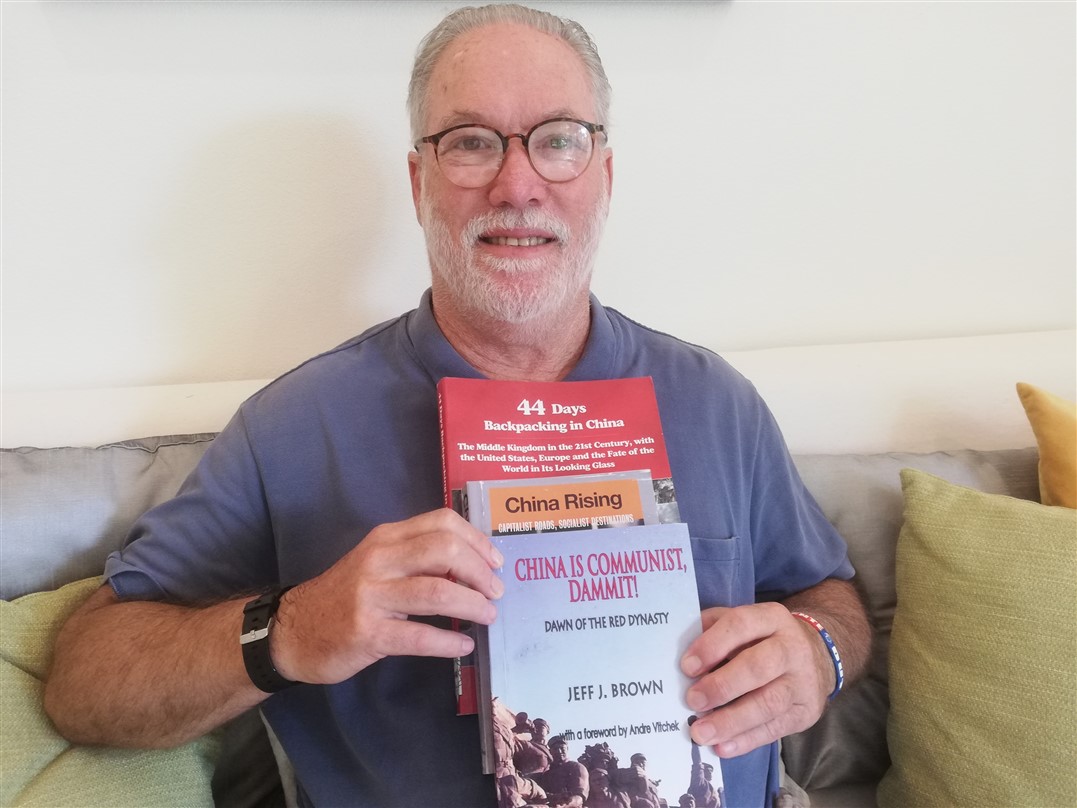 Pictured above: I’ve got The China Trilogy in my hot little hands, waiting to autograph, dedicate and send to you anywhere in the world!

Last week I got a $200 donation from a Mr. Hogan in Florida, United States of America. I was bowled over by his generous contribution to this site and really appreciated what he said. His comment was,

I watched your videos, I know the truth when I see it, and I want to support your efforts.

He left his email on the PayPal receipt and I immediately blasted of a big electronic thank you.

I woke up the next day. I was feeling very humbled by what he wrote, did and I was saying to myself,

I cannot let a guy contribute two hundred dollars to support this website, without reciprocating in some way. Sending flowers doesn’t seem to be the answer. But I have a few copies left that I printed in China of The China Trilogy, which is 44 Days, China Rising and China Is Communist Dammit”.

So, I contacted Mr. Hogan by email, saying,

Again, Mr. Hogan, thanks a gazillion, I’d like to show my appreciation by sending you The China Trilogy. I will autograph them and dedicate the three books to you. Is that something you would like to do?

Yes, thank you very much!

So, I did that. I autographed and dedicated the three books to Mr. Hogan in Florida, USA, and shipped them off with a tracking number, so he’ll be sure to get them.

Thus, I thought to myself, why not make this offer to all the friends, fans and followers of CRRS?

Normally, when you buy the three trilogy books from me directly, autographed and dedicated to you, it’s US$47 plus shipping, which usually comes out to about 80 bucks, which is still a huge savings, compared to buying them on Amazon (https://chinarising.puntopress.com/2018/06/30/praise-for-the-china-trilogy-the-votes-are-in-it-r-o-c-k-s-what-are-you-waiting-for/). Therefore, you can donate $200 to China Rise Radio Sinoland, to support paying all the technicians we must hire, to keep deep state hackers from getting into the site. With their daily attacks, knock on wood, for the last 18 months, CRRS has been secured, but at great cost, as thousands of dollars a year are spent maintaining CRRS and its sister site, The Greanville Post (www.greanvillepost.com).

Thus, send $200 by PayPal, to jeff@brownlanglois.com, make sure you leave me your email, so I can contact you, get your address; I will autograph and dedicate the three trilogy books to you and get them safely shipped off with tracking number. It’s a great win-win way to learn about China on your end, with The China Trilogy uniquely made for you, while helping secure CRRS and supporting my work as a truth-telling journalist.

Don’t have $200? Pool it with friends, family, neighbors, school, place of worship or workplace. I can dedicate each book individually to the team, then you can swap and read all three! Don’t have $200? Then pool together to just buy The China Trilogy!

The offer is out there, while very limited supplies last. Thanks, and have a wonderful day!