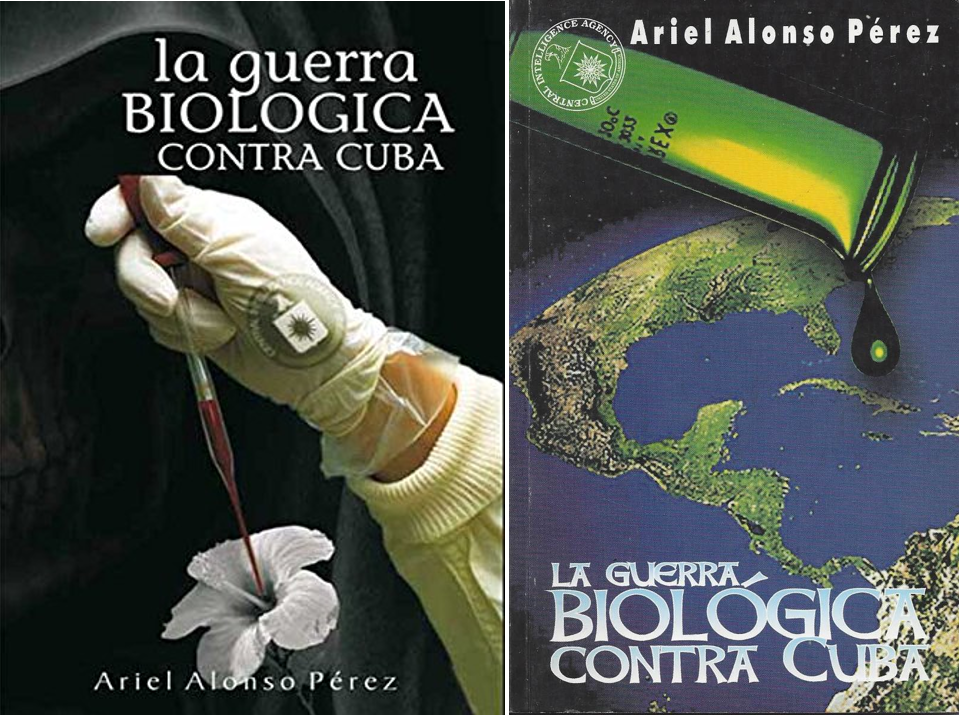 Pictured above: the front covers of Dr. Ariel Alonso Pérez’s damning book proving the United States’ decades’ long germ warfare attacks on the people, poultry, livestock and crops of Cuba. In English, it is, The Biological War against Cuba. I am proud to call him a comrade.

I recently wrote that the SARS-CoV-2 pandemic will strengthen humanity’s communist-socialist-anti-imperialist peoples and cause a dystopian nightmare for the 99% in global capitalist countries (https://chinarising.puntopress.com/2020/04/12/the-winners-of-the-sars-cov-2-panic-are-communist-socialist-anti-imperialist-peoples-the-losers-are-the-99-in-gangster-capitalist-eurangloland-and-its-global-vassals-china-rising-radio-sinoland-2004/).

This is no truer than in Cuba. These 11 million proud and defiant fighters have paid a heavy price for insisting on their independence and freedom from the slavery humiliation of global capitalism. Since kicking out the raping, plundering Yankees and Europeans in 1959, Western sanctions and a total economic blockade have cost them an estimated $1.22 trillion in current dollars (https://www.rt.com/business/186528-cuba-embargo-economic-damage/). That comes out to $20.4 billion per year of economic loss, or about 20% of the country’s annual GDP of $100 billion.

Imagine how much more wealthy and prosperous Cubans would be today, if they were 20% richer over the last 60 years. But that is the whole point of the West’s genocidal economic sanctions and blockades, which is to make sure that no communist-socialist country can lead a normal life and flourish. Communist-socialist success stories around the world would inspire the West’s 99% to start demanding real, lasting change for their benefit. This is why Eurangloland’s oligarchs are happy to exterminate, year after year, decade after decade, millions of citizens in anti-imperialist countries, behind their withering Big Lie Propaganda Machine (BLPM) to demonize and destroy them. Even well-intentioned Westerners are so brainwashed about the evils of communism and socialism, that they tacitly normalize this genocide. They have blood on their hands, which they cannot see inside the Great Western Firewall Matrix.

Since Xi Jinping was elected president in 2013, the unprecedented, desperate attempts to cripple communist-socialist China are no coincidence. For the first time, global capitalism has a (rich), super-successful, powerful, visionary, anti-imperial country that they cannot defeat with sanctions and blockades. This description of China has been true since the Mao Era, 1949-1978, but what has been added is the financial wealth of “rich” too.

In my aforementioned article, I wrote much about the belief in solidarity among anti-imperial peoples. Europe had a strong sense of this ideal after World War II, when its economies were largely socialist. However, it is but a flicker of a flame these days, after forty years of relentless BLPM, neoliberal, neoconservative brainwashing. Privatize everything! Austerity for the 99%! Trillions in giveaways to the 1% – they deserve it!

When anti-imperialists sign a letter or say goodbye with “In solidarity”, it represents the hopes, dreams, struggles for a better future for all of the world’s 99%. In spite of countless thousands of martyrs who have suffered and died in Cuba, as a result of the West’s genocidal sanctions and blockade, Cubans have shown tremendous solidarity with the world’s peoples, sending over 400,000 medical experts to more than 164 countries in the last 60 years. In spite of every psychopathic evil imaginable that the West heaps on the indefatigable people of Cuba, they still currently have 28,000 medical professionals working in 60 countries today (http://www.xinhuanet.com/english/2020-03/29/c_138927933.htm).

Now with SARS-CoV-2, Cubans are offering their expertise to fight the virus on the streets and the hospitals of the world. Dr. Ariel Alonso Pérez, who has contributed to the Bioweapon Truth Commission  and its Global Online Library (BWTC-GOL – www.bioweapontruth.com), recently sent to another founding member, Tom Powell and me a couple of emails to tell us news from the heartland of Cuba. They are translated below from the Spanish, with slight editing for clarification.

Maybe then you can appreciate why communist-socialist Cuba and all its anti-imperial brothers and sisters are going to be doing just fine, with or without SARS-CoV-2. I am proud to call Dr. Ariel and Tom comrades – in solidarity.

Very happy to receive your email. I am also retired and my health is somewhat deteriorated, due to problems in my legs, but we must continue fighting. I have also spent many years, first investigating the facts of (US) biological warfare against Cuba and later investigating the history of these covert actions.


Soon I will also make the history of this pandemic that I am convinced is another covert action.

I live in a town far from the capital Havana. It’s called Santiago de las Vegas. My wife and I are also protecting ourselves, as it has been recommended in Cuba. I will send you another email today about Cuba’s aid to other countries, including two countries in Europe, Italy and the Principality of Andorra.

In other emails I will try to send you my book in pdf format. It can also be found on the Internet, searching for Ariel Alonso Pérez or La Guerra Biológica contra Cuba, and on a webpage named Ruthtienda.com. When you have it you can write the articles you want, on the topics that I deal with in that story.

I have also seen my book on Amazón, which sells it more expensive, “pirated” AND from whose sales I have never received a penny. Maybe I’ll try to send you other articles of mine.

Take care, brothers, you, your wives and families. The good ones have to continue living, to continue fighting.

I am sending you some good news from Cuba.

While the bad guys spread death and blood across the planet, the good ones like us, we water the garden of our world with love, solidarity and blessings.Cuba has distributed solidarity throughout the world for many years and many countries, which have needed and requested it.

From very early on my country has sent its doctors, nurses and technical health personnel to many countries to contribute to saving lives, threatened by COVID-19. Here is the list I drew up:

Saint Vincent and the Grenadines – March 26, 4 doctors and 12 nurses.

Dominica – March 28, 5 doctors and 25 nurses and 5 technicians and health professionals.

In total our aid has been sent to 18 countries – including 2 countries in Europe for the first time – with 173 doctors, 553 nurses and 24 other technicians and health professionals.

This is a total of 750 Cuban health workers. They are all volunteers in the Henry Reeve Brigades. (https://www.paho.org/hq/index.php?option=com_content&view=article&id=13375&Itemid=42353&lang=en).

These brigades were created by Commander Fidel Castro to help the peoples of the Americas. When Hurricane Katrina hit that brother country, the government of the USA did not accept our help. In honor of brave American solidarity, Fidel gave that name to the Brigades (https://web.archive.org/web/20070929125152/http://www.zmag.org/content/showarticle.cfm?ItemID=8788).

Henry Reeve was a young US officer who came to fight in Cuba and give his support for our War of Independence in the 19th century and died giving his life for our country (https://en.wikipedia.org/wiki/Henry_Reeve_(soldier)).

Concluding this writing, another Cuban medical brigade was leaving for Mexico.