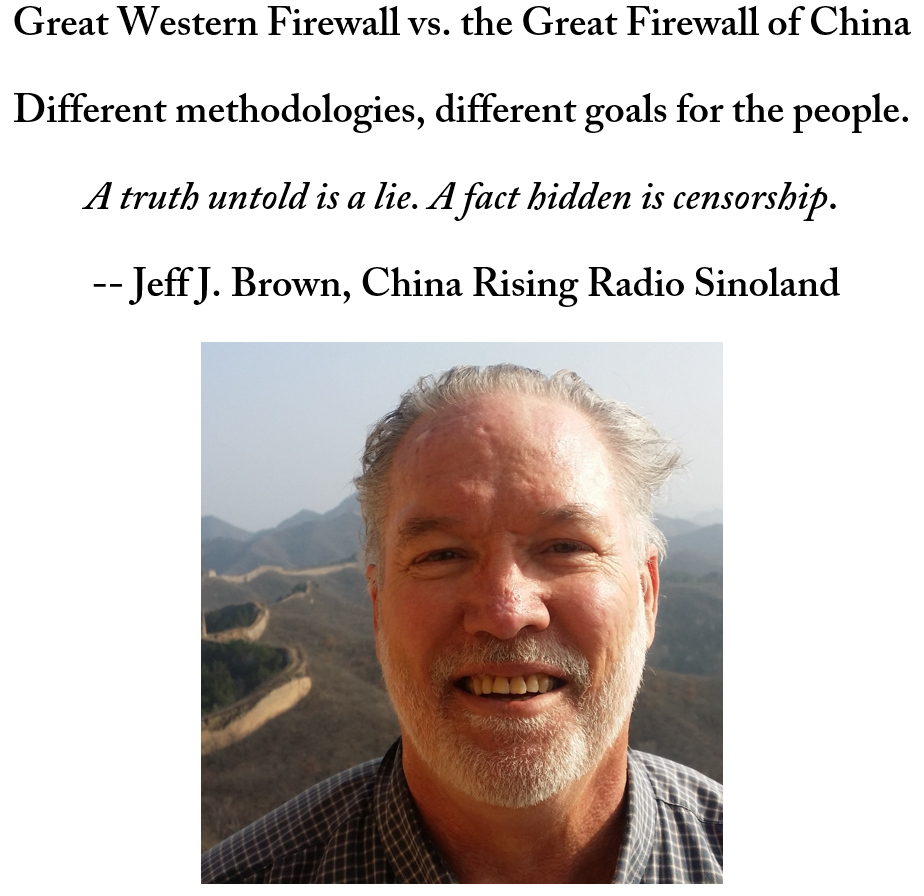 Pictured above: Yours truly has had a lot of negative experiences with being censored by the West’s Big Lie Propaganda Machine (BLPM).

On 21 October, Secretary of State Mike Pompeo announced that Washington had designated the operations of six more Chinese media outlets as foreign missions. American observers have discussed Pompeo’s move, asking whether the US may boast of a diversity of views and freedom of the press amid recent instances of censorship by corporate media.

“We’re not placing any restrictions on what these outlets can publish in the United States”, Pompeo emphasised. “We simply want to ensure that American people, consumers of information, can differentiate between news written by a free press and propaganda distributed by the Chinese Communist Party itself. They’re not the same thing”.

“[Pompeo’s] actions against Chinese media companies are in line with what he is doing with Chinese manufacturers like Huawei”, says Currie Dobson, a US political analyst and activist. “They are not ‘welcomed’ into the American sphere of influence which is a nice way to say their domineering hegemony of the planet. The pressure on China is to try to get them to cave into the unipolar American world”.

The reality is that singularity is long gone; it’s just the Americans who live in total denial about it, according to the activist. He does not rule out that in the meantime, any and all media that does not propagate the US agenda is deemed an “enemy”.

Commenting on Pompeo’s remarks with regard to the Chinese state-owned media outlets, Jeff J. Brown, the editor of China Rising Radio Sinoland, underscores that “the Chinese consistently rank their media satisfaction around 65-70%, whereas in the West, it is 20-40%”, according to Pew Trust international surveys.

No one has ever concealed the fact that China’s main media outlets are state-owned, he notes. Still, it does not automatically mean that “state-owned” news sources are spreading what the US secretary of state calls “propaganda”, according to the journalist.

To illustrate his point, Brown has drawn attention to the fact that in the West, a limited number of “transnational oligarchic corporations” own 95% of all major media brands and impose their agenda on the world while collaborating with the US “deep state”, military, and intelligence entities.

​“Westerners are brainwashed that they have a ‘free press’ and ‘freedom of expression'”, Brown says. “Yet, with hundreds of thousands of social media accounts, books, revues, magazines, blogs and audiovisual channels being censored and cancelled, including even US President Donald Trump, it is truly an Orwellian dystopia of doublespeak”.

​Unfortunately, Pompeo has yet to admit this reality, the journalist highlights.

China Urges US to Stop Bullying

Previously, the US State Department designated four major Chinese media firms as foreign embassies in June and five in February. The entities now have to adhere to certain requirements under the Foreign Missions Act, including informing the US authorities of their real estate holdings and personnel changes, new hires, and staff departures.

In addition to this, Washington signalled in March that it would reduce the number of Chinese citizens from the People’s Republic’s major media working at US offices from 160 to 100.

In response, Beijing expelled about a dozen American reporters with The New York Times, The Washington Post, and The Wall Street Journal operating in China, according to Reuters.

The Chinese leadership has repeatedly urged the US to discard “bullying acts” and respect the freedom of the press. On 10 September, Chinese Foreign Ministry spokesperson Zhao Lijian addressed the issue, lamenting the fact that US policymakers are suppressing the People’s Republic’s newspapers, calling them “propaganda machines” of the Communist Party of China (CPC).

In response to the Start Department’s recent decision, Hu Xijin, editor-in-chief of China’s Global Times, a media outlet that was designated as a foreign mission last February, said that Washington had gone “too far” and predicted that the move would “further poison [the] working environment of media outlets in each other’s country”.

Washington’s crackdown on the Chinese media comes amid worsening relations between the two major global powers over the coronavirus pandemic, South China Sea issues, and the Trump administrations mounting pressure against the People’s Republic’s high tech sector and, most notably, telecom giants Huawei and ZTE.

The open truth is all media in China is state owned and managed, in order to maintain social harmony, economic prosperity for all and to prevent the West from succeeding in its unending, 70-year color revolution against the Chinese people’s communist-socialist way of life. The citizenry understand this and demand a state media for these reasons, and it’s obviously a very successful system for the nation’s progress. This is proven in various Pew Trust international surveys, where the Chinese consistently rank their media satisfaction around 65-70%, whereas in the West, it is 20-40%.

The contrast with the West is stark. There, 8-10 transnational, oligarchic corporations own 95% of all media, which is state managed by the deep state: CIA/NSA/NATO/Wall Street/Department of State+Ministries of Foreign Affairs and global gangster banksters, with their many thousands of foundations, think tanks and NGOs. As an example, the US Department of Defense publishes 1,200 magazines around the world, the CIA/MI6 many more publications and AV media.

Sadly, Westerners are brainwashed that they have a “free press” and “freedom of expression”. Yet, with hundreds of thousands of social media accounts, books, revues, magazines, blogs and audiovisual channels being censored and canceled, including even US President Donald Trump, it is truly an Orwellian dystopia of doublespeak.

Thus, Mike Pompeo is right about China’s media being state managed. The problem is he refuses to admit the same about its Western counterparts.