Pictured above: on the left, my guest Eric Arnow is with Jinghui Da Hesheng, taken at Laozusi, Old Ancestor Temple, China (see details below). On the right, known as the Five Greats or the Five Teachers, are from left to right, Marx, Engels, Lenin, Stalin and Mao.

Audiovisual only. No text. Transcription forthcoming in the near future.

#1: Eric’s wonderful blog about his travels to Buddhist temples in China,

#2: The two essays comparing Buddhism to Marxism that we discussed,

#3: Three books that Eric discussed, with his comments,

-The Tao of Physics, by Fritjof Capra, Copyright 1975
-The Buddha’s Teachings on Prosperity—-At Home, At Work, in the World, by Bhikkhu (the ancient honorific of a monk, maybe the equivalent of Fra or Friar.) Bhikkhu Basnaagoda Rahula, 2008.
I should add that it draws heavily from the Buddha’s sermons of the original Buddhist teachings, aka Theravada, or ‘Elders’ Way’.
-The Vimalakirti Sutra, various translations. The translation I show is by Burton Watson, translated from the Chinese translation from Sanskrit by the Kumarajiva. It was written probably in the first or second century before Christ. The forward by an eminent translator of Chinese Alex Wayman, whom you may have heard of, says it was written about 180 c.e.  This Sutra was written in the Mahayana period….
The difference between the two is that Theravada emphasized Self Enlightenment.
Mahayana emphasized enlightenment/saving others, aka Bodhisattava. 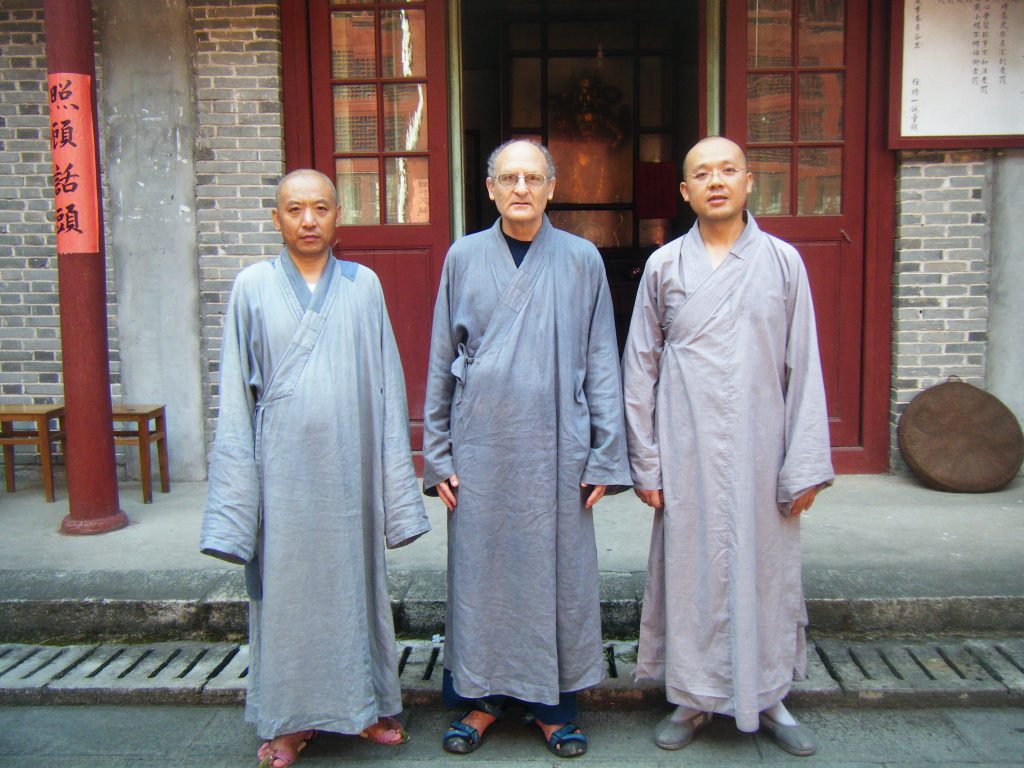 1-Eric is center, with two other monks outside the meditation hall at Baofengsi, where Mazu one of the famous Chan/Zen Masters taught. 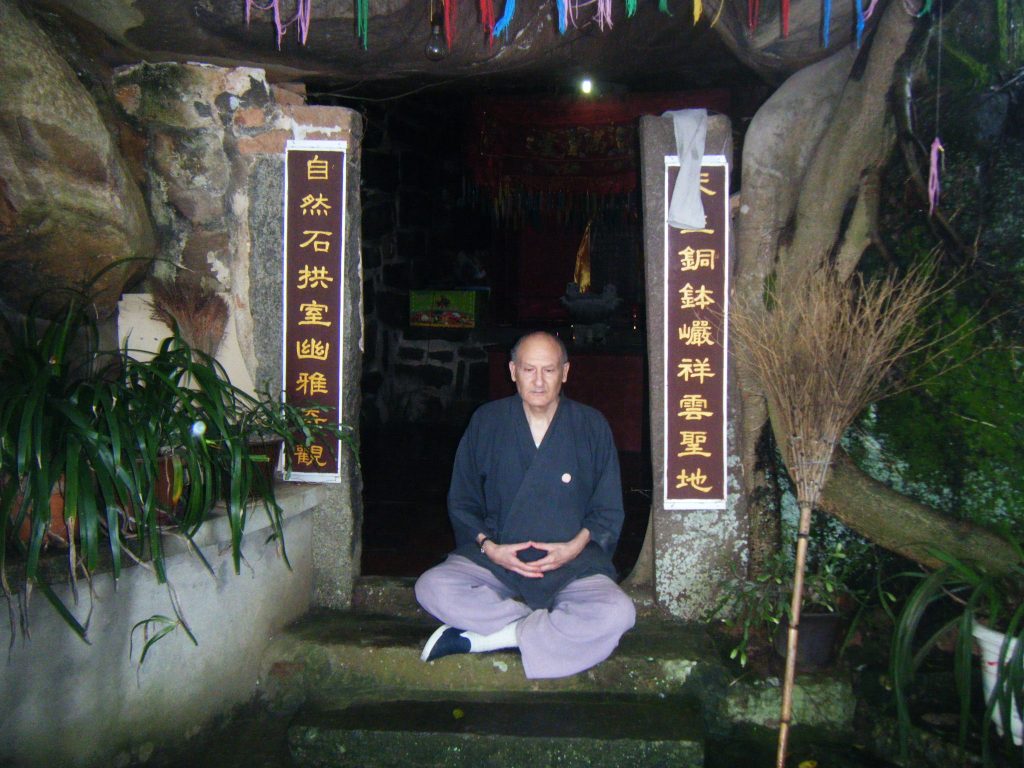 2-Eric sitting in the Zen posture at the entrance to an old one-room shrine room, in a temple near Xiamen. 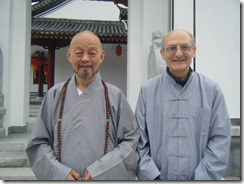 3-Laozusi, the Ancestor’s Temple near Huangmei in Hubei. The Master, Jinghui Da Hesheng, or Senior Monk continued the work of his Master, the legendary Xu Yun, who knew both Mao Zedong and Zhou Enlai quite well. He and his disciple Jinghui, rebuilt many Buddhist temples in China, and Buddhism is now thriving there. Here, Eric is with Jinghui taken at Laozusi. It’s on a mountain top, in the winter, inaccessible due to snow. It’s where I did my first Zen retreat, as noted in the blog post where I was introduced to him. 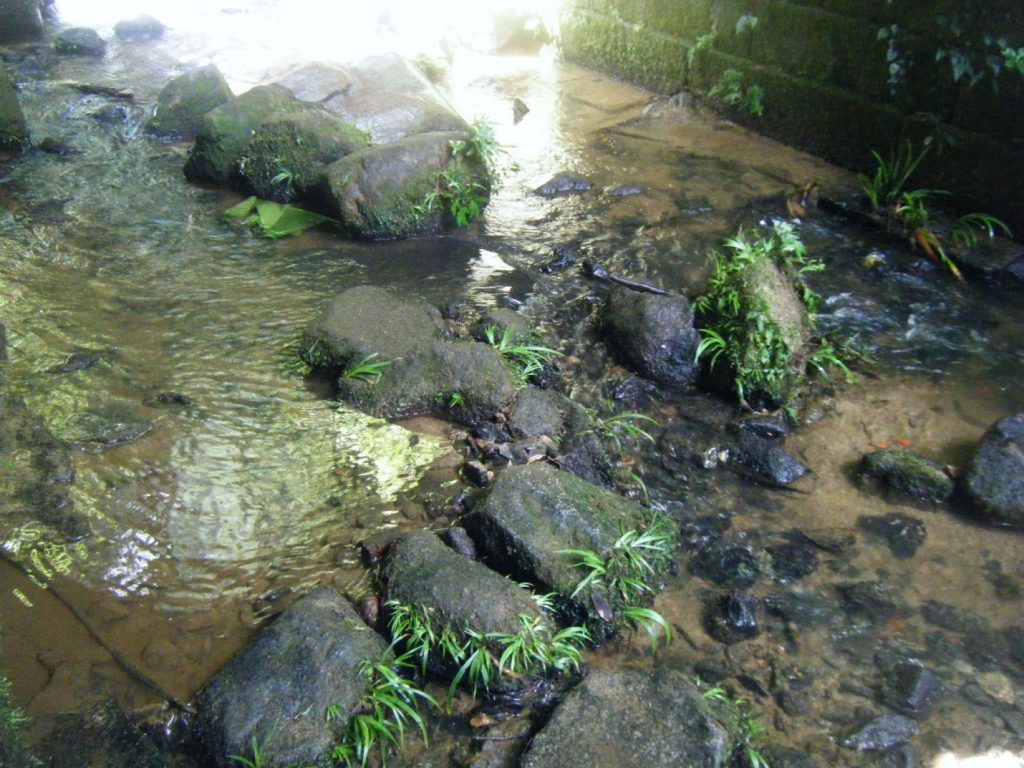 4-Eric explains: a small stream, but famous in the history of Zen. Dongshan Liangjie was trying to become enlightened and wandered here and there meeting masters and meditating. One day, he saw his reflection in the water and was enlightened!

Unfortunately for me, when I went there, all I saw was a little stream. But I did feel good finally coming full circle and in my own way, meeting one of my Zen ancestors. 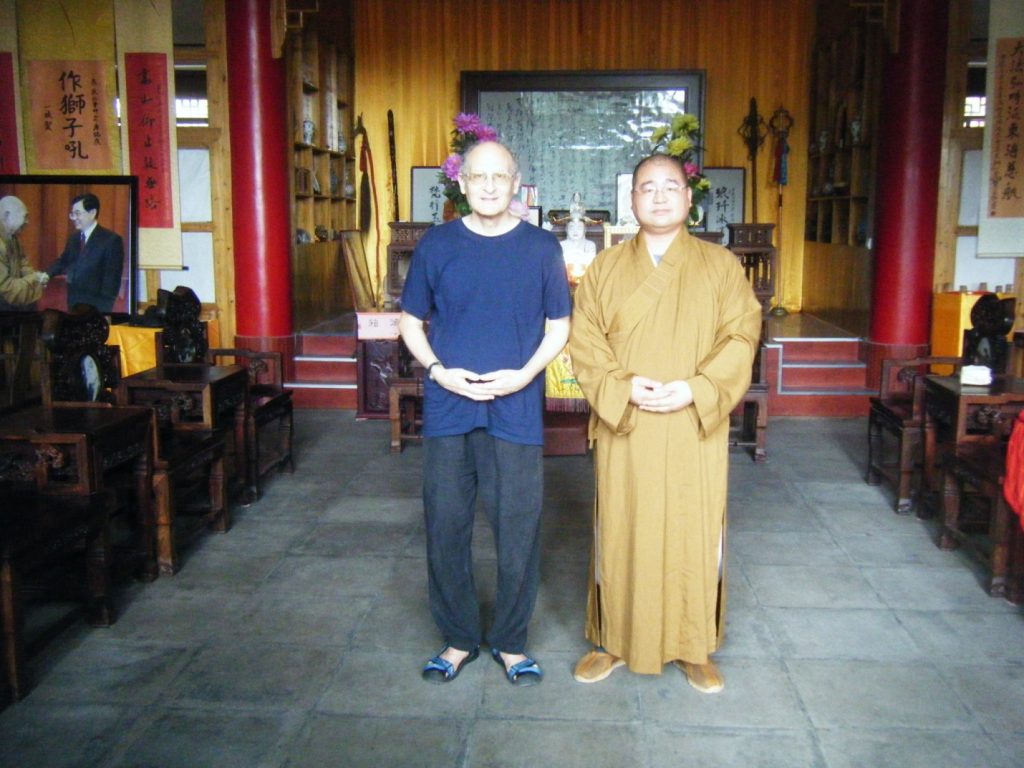 5-Eric’s story: I visited another famous Zen/Chan temple. It was hot, midsummer. It was hard to get to but even with my poor Chinese, people got me onto the right bus and I showed up.

When I appeared, I’d arrived at a summer camp where young adults were doing a retreat. They looked at me as if I’d arrived from Mars….what’s a White Guy (Devil??) doing here. So, I explained how I knew of this famous temple and came to pay my respects. They treated me very, very well and the abbot drove me personally on a tour of other famous temples, and left me at Baofengsi.