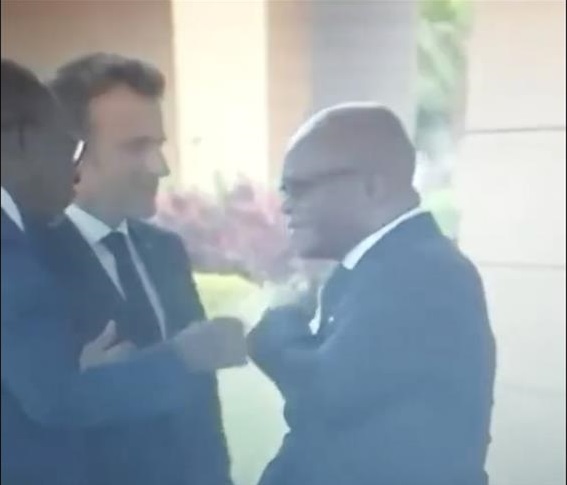 Pictured above: The ever-feckless French President, who pisses off everyone he meets. Here, a diplomat from Benin is brushing off his own shoulder, where Macron had just put his hand on him, like he was boy!

Note before starting: just recently, an international news agency asked me to respond to their questions, in order to integrate them into an article they later published. For the first time, they did not use mine. It concerned the G-20 Summit in Indonesia last month. As usual, the West’s kakocratic leaders made asses of themselves; they do not know any other way to govern. As a citizen of France, I follow what goes on here very closely. I can tell you that President Mini-Me Emmanuel Micron is the most feckless of them all. I thought the exchange was worth sharing with you. To wit,

Q1-The AUKUS agreement caused fears in Beijing, with China being concerned that some sort of a military bloc was being formed against it. How possible is that, and what do you think about Macron’s comments that the deal was not directed against China?

A1-Macron’s comments remind me of a rapist holding a knife on his victim’s neck, while reassuring her that she will not get hurt! In other words, don’t listen to what they say, watch what they do. Since 2017, France has been cooperating with the USA, Britain and Australia, sending its navy to the South China Sea and cooperating in numerous patrols and military exercises together. France also has military bases in the Pacific, in New Caledonia, and in the Indian Ocean, on Mayotte and Reunion. France also has a substantial global submarine fleet, armed with thermonuclear ICBMs. The last time I checked, China does not park its navy off the Riviera in the Mediterranean, nor the coast of Normandy.

A2-The most egregious aspect of AUKUS is that it violates ASEAN’s accord to not nuclearize the region. While it is probably a fig leaf that the USA does not have nuclear arms at its occupying base in Darwin, Australia, a member country (Australia) officially using nuclear submarines is an egregious slap in the face for all of Asia.

Do yourself, your friends, family and colleagues a favor to make sure they are Sino-smart:


44 Days print and ebook on Amazon,

BIG Red Book on China print and ebook on Amazon,

Praise for The China Trilogy,