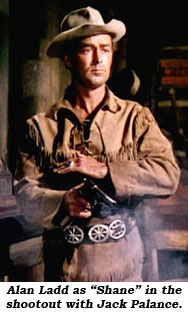 Pictured above, a still shot of one of the greatest gun fight scenes in Hollywood history, from the classic Western, Shane.
Enjoy watching an allegorical gunfight between two presidents: Xi Jinping and Barak Obama. Is it Xi’s dream, the Chinese Dream or a harbinger of the 21st century? You decide.