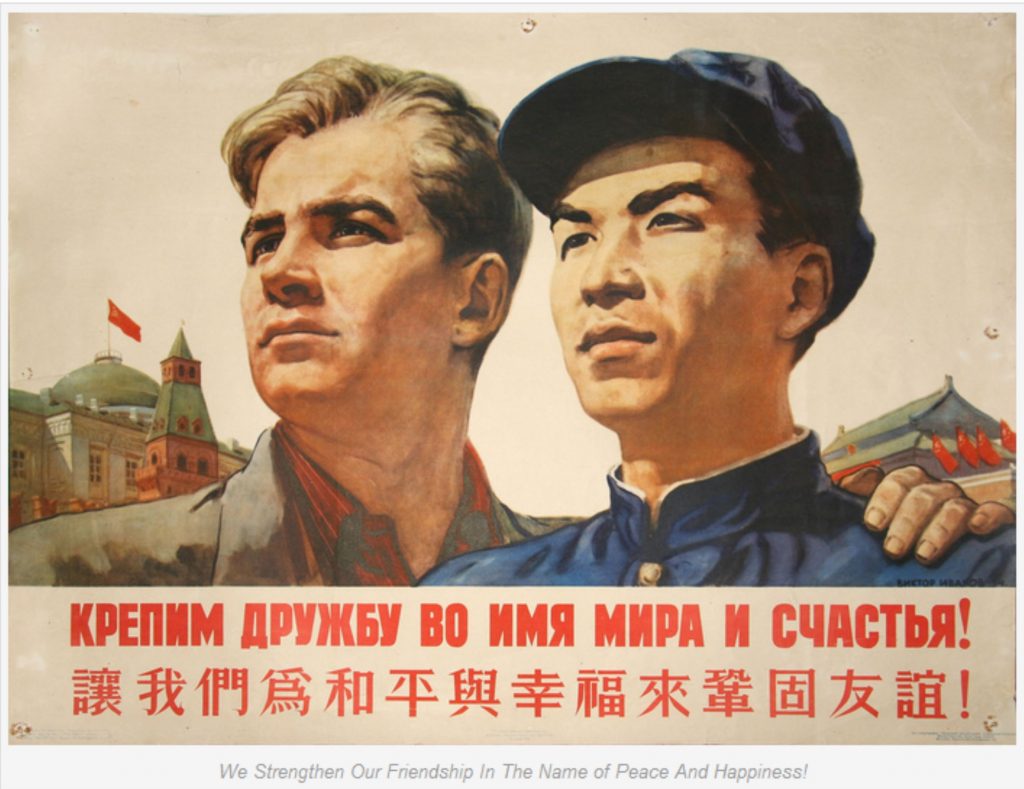 Pictured above: Poster from the 1950s, showing communist-socialist brotherhood between China and Soviet Union.

Join author Jeff J. Brown in Beijing for his 44 Days Radio Sinoland Show. He discusses news and events about China, at home and around the world – information you almost never see and hear behind the Great Western Firewall. China is way too important to not have an insider’s perspective on how its leaders and people are shaping and moving the 21st century.

In today’s show, author Jeff J. Brown reads his first article on The Saker, a monthly series called The Moscow-Beijing Express, covering news and events that pertain to these two colossal countries and allies:

Russia through Western & Chinese eyes: a Study in Contrasts

Welcome to the new Moscow-Beijing Express, on The Saker, which will be reporting periodically on Russian-Chinese news and perspectives.

If you have not already done so, it is highly recommended to read the following interview between The Saker and Jeff J. Brown. It’s a great primer on Sino-Russian relations, past, present and future. http://thesaker.is/saker-interview-with-jeff-j-brown/

It is always interesting to see the triangular interpretation of current events, between the West, China and Russia. An excellent, recent case to consider is Russia’s new law passed, to severely increase the oversight of foreign NGOs inside Russia, as well as the monitoring of these NGOs’ local partners.

This new law was passed in the Duma (Russia’s legislative body) and sent to President Vladimir Putin, for his imprimatur. Mr. Putin wasted no time in signing it into law, on May 23rd.

The Western corporate media was, as expected, apoplectic. Disregarding the more rabid MSM megaphones on America’s payroll, take a few minutes to read this article by The Guardian, a supposedly liberal, anti-establishment news organ. http://www.theguardian.com/world/2015/may/19/russia-bans-undesirable-international-organisations-2016-elections

The CIA owns everyone of any significance in the major media.

A thoughtful analysis of this article clearly demonstrates that the CIA/MI6 editorial and journalistic puppeteers at The Guardian are large and in charge. This is a chilling example of deft censorship and psyops propaganda behind the Great Western Firewall http://thesaker.is/behind-the-great-western-firewall-is-the-ugly-truth/ . Its Orwellian language is parsed to perfection. For Newspeak, it approaches the level of art. No wonder 99% of Westerners are oblivious, brainwashed.

Two observations are salient. The whole mien of the article craftily puts all the blame on the Russians, demonizes President Putin, while trying to come across as “objective” and “balanced”. The other obvious Western corpse hidden behind the Great Western Firewall is the words, “color revolution”. Obviously, The Guardian’s editors and journalists have been given their marching orders by their CIA/MI6 masters: never associate Western NGOs with color revolutions. Verboten.

Not so in Sinoland (China). As far back as 2009, Baba Beijing (my wry appellation for China’s leadership) published its Notice on Issues Related to the Administration of Foreign Currency Contributions to Mainland Entities. It was specifically designed to limit and track the money flowing from outside China, to foreign and domestic NGOs. Nor was China the first. Baba Beijing was undoubtedly inspired by Eritrea, “Africa’s Cuba”, which has been all over Western NGOs, like sink on manure, since the early 90s. Recently, Eritrea finally just kicked them all out. There, take that, you regime changing miscreants. And Eritrea was undoubtedly inspired by Cuba and other go-it-alone countries, like North Korea, which eschew Western NGOs and vice versa. And the inspirational motherlode? They all surely go back to Communist USSR and China, the twin towers of anti-Western Empire.

In the interim, India, taking its cue from China, passed its 2010, Foreign Contribution Regulation Act, which was not coincidently similar to China’s law. At this point, a virtuous vortex of anti-Western NGO-itis began to manifest itself. Russia knows a good thing when it sees it, so the Siberian Giant signed a law in November, 2012, that in retrospect was too weak (it was ironically based on America’s anti-communist Foreign Agents Registration Act). But that was before a little thing called fascist genocide got perpetrated on its southwestern flank, in the Ukraine. Time to get ugly.

So now, in 2015, it is Russia’s turn to stir the vortex even faster. Hence, its very draconian, nanometer-wiggle-room-for-NGOs law passed last month. So, then what happened? China liked what it sees in Russia, doesn’t like what it sees in Venezuela, the Ukraine and the US just appointing Richard Miles, Serbia’s and Georgia’s color revolution mastermind, as head of mission in Kyrgyzstan. This small but incredibly strategic Muslim country is sandwiched between China and Kazakhstan, a neighboring brother in anti-Empire arms.

So, before Putin’s signature could even dry, China’s National People’s Congress (NPC) proposed a law that, lo and behold, is almost identical to the Duma’s. I think Russia and China probably share a notebook now, in their respective political libraries, called, Killing Western Color Revolutions in their NGO Cradles. China’s proposed law is up for public comments and the G7 goons will surely lodge complaints. But given just how corrupting and dangerous the West’s whole NGO racket is for any country and its people, who elect not to be America’s prostitutes, I will be surprised if this Chinese bill does not pass, with at most, minor modifications.

Also, a couple of days after this law was proposed, the NPC rolled out its new national security bill. The fact that these two bills were submitted almost simultaneously is undoubtedly not an accident. The Chinese are masters of subtle symbolism (undoubtedly inspired by their unique, ideographic language) and the message here is Confucian clear: Western NGOs are antithetical to China’s national security interests.

Since Langley and Vauxhall Cross are as obtuse as 179 degree angles, would somebody please point this out on their Facebook accounts? Thanks, and tell ‘em 44 Days and The Saker sent you.

Back to the differences between the Great Western Firewall’s Orwellian manipulation of vocabulary, compared to Russia and China, this article in the Chinese media is fairly typical. Its title says it all: Russia promulgates an “Undesirable Organizations Law” to defend against “Color Revolutions”. http://news.sina.com.cn/w/2015-05-26/065931876257.shtml .

First, Dorothy, Toto’s mysterious, sudden death? Sorry to break the news, but it was not due to natural causes. Secondly, Miss Ruby Slippers, Western NGOs and color revolutions go together like Molotov cocktails and rooftop snipers. Or if you live in Odessa, the fascists just stand there for the whole world to watch in broad daylight, as they gun down and club innocents to death.

Russian leaders and representatives routinely get full treatment in the Chinese media. Here is an article listing all the meetings ever had between Xi and Putin, just in case you were counting. I know I was. The title says, Xi Jinping, arriving in Russia to meet Putin; during the last two years they have met 11 times. Priceless. http://news.qq.com/a/20150509/003754.htm

Here is a video of President Putin’s comments about America’s extrajudicial arrest of the FIFA officials and it includes images from Moscow, toward the end (sorry, in China there are ads too). http://tv.cntv.cn/video/C10336/a9b513408b4a493694fabe02a34b5408 The title says, America is trying to take the 2018 World Cup away from Russia. No nuanced Newspeak there. Obama is lucky to get 15 seconds on CNN. Putin gets a full two minutes on CNTV. This was watched by untold millions on the evening news and will stay on the Chinese internet for posterity. Putin is on Chinese TV frequently, same dance, second verse.

There are a billion Chinese with mobile phones and they are hardcore social media junkies (what did my neighbors do before 3G?). Photos like this one, with only a byline, http://news.xinhuanet.com/photo/2015-05/27/c_127848661.htm get passed around at the speed of light, on Wechat, Sina Weibo, Tencent Weibo, QZone, Pengyou, QQ, Douban, Renren, Kaixin and literally tens of other platforms that Westerners have never even heard of. Pictures really can convey a thousand words and images like this get transmitted hundreds of millions of times a day all across China. This one’s title says, Russian President Putin Meets with Yang Jiechi. It sure looks to me like they had plenty to talk about.

Please note the number of hits does fluctuate on Baidu, depending on the algorithm of the moment and from where you are searching.

Trust me, Saker and 44 Days fans, Baba Beijing has Russia’s back and makes sure its citizens know all about it. Not reading a word of the Cyrillic alphabet, I trust this is all reciprocal in Russia.