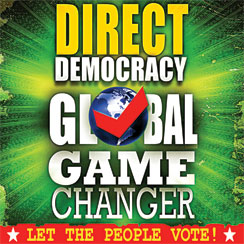 Pictured above: Moti Nissani says the West has to get back to ancient Greek direct democracy, if it hopes to survive.

Downloadable podcast (also at the bottom of this page), as well as being syndicated on iTunes, Stitcher Radio, RUvid and Ivoox (links below),

Join Jeff J. Brown in Beijing for his 44 Days Radio Sinoland Show. He discusses news and events about China, at home and around the world – information you almost never see and hear behind the Great Western Firewall. China is way too important to not have an insider’s perspective on how its leaders and people are shaping and moving the 21st century.

Today’s show is with a special guest, Dr. Moti Nissani. Dr. Nissani is an eminent thinker on interdisciplinary environmental issues. This is Part 2 of their very popular interview last month. Picking up with the Fermi Paradox and highlighting some of the first installment’s key points, they then share a fascinating, wide-ranging, yet inspiring discussion about the only hope for human survival: direct democracy and localized production.

Here are the links to Dr. Nissani’s articles on Veterans Today and Dissident Voice:

http://dissidentvoice.org/2012/07/seven-billion-cheers-for-direct-democracy/
Here is the link to the article about employees taking ownership of businesses, as a model for direct democracy: http://www.theguardian.com/world/2015/may/01/may-day-workers-of-the-world-unite-and-take-over-their-factories