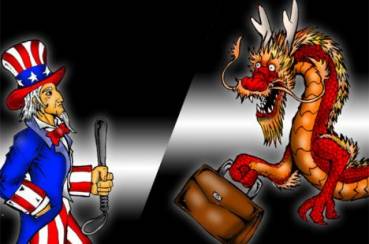 Pictured above: in the world’s poorest countries, Uncle Sam brings the brutal billy club of the IMF-World Bank rackets, while communist-socialist China arrives with briefcases full of apolitical investment and development projects.

After wowing the American business community in Seattle https://www.youtube.com/watch?v=b94oY1PzGSw and outshining Barak Obama as his state guest in Washington, DC (WDC), http://www.greanvillepost.com/2015/09/26/what-they-arent-telling-you-behind-the-great-western-firewall-about-xi-jinpings-meetings-with-obama/ and https://chinarising.puntopress.com/2015/09/26/what-they-arent-telling-you-behind-the-great-western-firewall-about-xi-jinpings-meetings-with-obama-44-days-radio-sinoland-15-9-26/ Xi Jinping went to the United Nations in New York, to wrap up his US visit.

Xi gave his first head of state speech at the United Nations and chose the Sustainable Development Goal Summit, in which to do so. This speaks volumes. https://www.youtube.com/watch?v=CdjmgQ0RklY After Seattle and WDC, it was continued win-win engagement (one of Xi’s fave expressions) to show the world that China, as one of the two big Anti-West giants, along with Russia, is serious about conducting international cooperation much differently than Western empire ever has.

…by putting justice before interests and joining other countries in a concerted effort to realize the (UN’s) Post-2015 Agenda.

President Xi also took on the West’s baseless propaganda that over the years, China has not played an active role in world development. He reminded his listeners that China has already pulled 449 million of its own citizens out of poverty, which equals 90-95% of the world total, over the last generation (and over 1,000,000,000 since liberation in 1949. http://www.greanvillepost.com/2015/06/16/radio-sinoland-mao-zedong-ow-or-wow-2015-5-1/ https://chinarising.puntopress.com/2015/05/02/mao-zedong-ow-or-wow-44-days-radio-sinoland-show-15-5-1/ In the last 60 years, China has provided 400 billion RMB in aid to over 166 countries and sent 600,000 aid workers abroad, 700 of whom died while on duty in the developing world. Try finding this behind the Great Western Firewall.

Furthermore, during the next five years, China will provide funding for 120,000 people and scholarships for 150,000 students from developing countries, to go to China for training and study. China has also budgeted to establish a South-South Cooperation and Development Academy. Talk about winning hearts and minds. It’s the anti-imperial version of Shock and Awe.

Needless to say, President Xi Jinping was the most applauded speaker at the summit. That tends to happen outside of Western empire, when a socialist vision is promoted, rather than a capitalist one.

Just try to wrap your heads around all this. Can you imagine the imperial West forgiving 100% of numerous countries’ debts, in the scale of billions of dollars? Or even deigning a haircut on the principle? The United States routinely forgives Israel’s billions in military purchases. But besides Zionistan, this is a headline rarely seen behind the Great Western Firewall. Debt forgiveness is just another example of China leading constructively in world affairs, while Eurangloland (NATO, with Australia and New Zealand) is hell bent on committing destruction across Mother Earth. Instead of offering serious debt relief to the most disadvantaged, the West can only offer the Bretton Woods IMF-World Bank enslavement trap, along with its cruel and criminal dismantling of in-country state subsidies, public health and education programs, “market liberalization” (whatever the hell that is supposed to mean), WTO tariff terrorism, with the predictable selloff of precious state owned assets, at fire sale prices, to the West’s corrupt bankster barons.

Instead of Chinese hospitals and schools, the West exports government-overthrowing color revolutions, assassinations, death squads, drones, war and the resulting refugee crises, as we can attest across Africa, Asia, the Americas, the Middle East – and now Europe. Instead of hundreds of thousands of university scholarships, the West is happy to take the world’s wealthier citizens’ money, to pay sky high foreigners’ college tuition for their privileged children. While studying overseas, the West’s CIA complex will happily brainwash and recruit these students to be subversive, anti-local government agents and future leaders of all those ersatz color revolutions, once they get back home.

China’s investments and aid around the world are pleasantly notorious for being apolitical. This reflects China’s longstanding commitment to the 1955 Bandung Conference policies of non-intervention (although truth be told, during the Mao Era, China did support many anti-colonial revolutionary movements and after 1960, fought against countries friendly to the USSR, sad to say). Unlike the West, China is not shoving phony and hypocritical “human rights”, “Western democracy” and “universal values” down the hungry throats of their development partners. The poorest of the poor know that these imperial shibboleths are nothing more than Orwellian Newspeak to install corrupt, compliant local comprador leaders and governments, to hasten the extraction of their countries’ precious natural resources and the exploitation of the local people’s labor and skills. That way, the rape and pillage of these countries is all “legal and proper”. Just sign these “laws” on the bottom line, bought and paid for local stooge leader. We own you, boy. Sadly, the CIA complex and Western Departments of State/Ministries of Foreign Affairs can buy these traitors for a dime a dozen. Just think of the Shah, Pinochet, Suharto, Marcos, Mobutu, Yeltsin, Poroshenko and the thousands of others through the annals of imperial history. It takes a Xi, Putin, Kim, Nazarbayev, Lukashenko, Khamenei, Assad, Afwerki, Castro, Maduro, Correa, Morales, etc., who have the courage of conviction to renounce the low road to Western colonialism, in the name of their peoples, to overcome this all too human frailty.

Thus, President Xi and Russian President Vladimir Putin, along with the aforementioned anti-fascist Hall of Fame, are the two most popular leaders among the world’s Moral Majority, that 85% of humanity who is largely dark skinned, poor and frequently Muslim. The Americas, Africa, Asia and Oceania have their international heroes, the Anti-West Xi-Putin dynamic duo to cheer on. For the world’s oppressed, these two countries are offering a starkly different, hopeful vision than the one that has been violently forced upon the world, by racist, fascist, imperial Eurangloland, since 1492.

As President Xi cried out at the end of his September 3rd, Anti-Fascist Victory Day Parade commemorative speech, in Beijing, http://thesaker.is/the-moscow-beijing-express-from-may-9th-in-moscow-to-september-3rd-in-beijing-the-anti-west-order-comes-full-circle/ http://44days.net/?p=3004

I tell you what: Martin Luther King, Jr., could not have said it better…

Postscript: The Xi Jinping-China Rolling Thunder Tour continued during the United Nations General Assembly, where he pledged US$1 billion to a joint China-UN peace and development fund. China will also set up a permanent UN peacekeeping force of 8,000 troops. Another US$100 million in military assistance is pegged for the Organization of African Unity’s (ONU) peacekeeping missions during the next five years. This, while Eurangloland is habitually in arrears for its UN funding engagements, to the tune of billions of dollars, while its leaders will regurgitate their nonstop litany of colonial-imperial rostrums: privatization, market liberalization, IMF-World Bank slavery, WTO tariff terrorism, invasions, war, etc. http://www.telesurtv.net/english/news/China-Will-Never-Persue-Expansion-President-Xi-Tells-UN-20150928-0014.html https://www.youtube.com/watch?v=aBwDWaDBRkA