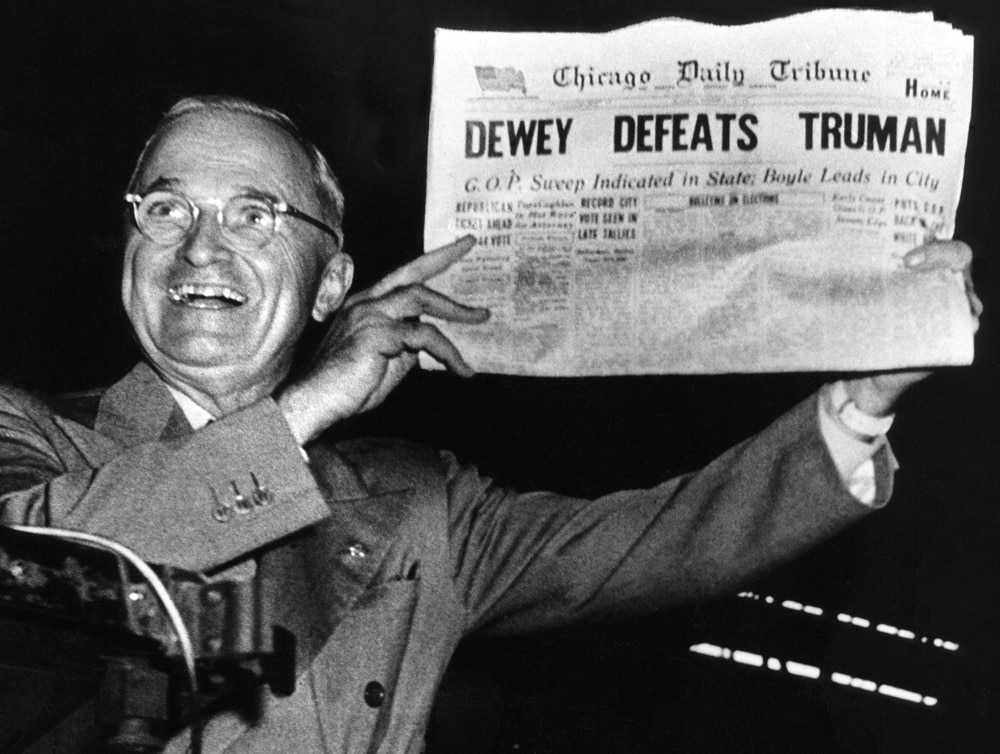 Pictured above: pictured above is Harry Truman showing off his “miraculous” presidential election upset over Thomas Dewey, in 1948. Miraculous indeed. Truman was not elected by the people. He was selected by the deep state. (Image by Baidu)

If you believe that Donald Trump was “elected” by the citizens of the United States, then you are woefully ignorant of American history. At least since Harry Truman’s “miraculous” defeat of Thomas Dewey, in the 1948 presidential election, the owners of the country make sure their candidate gets put into the White House. From the beginning of American history, elections at all levels have reeked with the stench of corruption and stolen votes. Whichever political party controls the state government, we are supposed to believe that it and its appointed Attorney General, will honestly count the votes in opaque ballot boxes, which disappear into the night and now in thirty states, on computer hard drives they control.

It is widely known that the only reason John F. Kennedy became president in 1960, against Richard Nixon, was because Chicago’s mayor at the time, Richard Daley, “miraculously” found 50,000 ballots, all amazingly for JFK. Kennedy thus carried the state of Illinois, thereby having enough electoral college votes to win. The US president isn’t even elected by the people, but indirectly, with 535 appointed representatives choosing the winner. In any case, from city to county to state to national elections, the United States has a 200-year history of bogus, bought and bribed votes.

Those who get into office and stand up to the country’s owners, tend to skew the actuarial tables for life expectancy, downward. Andrew Jackson was almost killed in office, because he shut down America’s central bank. Anti-bankers William Harrison, Zachary Taylor, Abraham Lincoln, James Garfield and William McKinley all died in presidential office. Three of them were shot. Teddy Roosevelt, Woodrow Wilson and Franklin Roosevelt all wrote privately that they and the US government were under the control of the big banks. JFK, among many sins, was printing silver backed notes outside the Federal Reserve system and had to be eliminated. They didn’t even wait for RFK to be elected and murdered him during the 1968 presidential campaign.

Harry Truman was a stooge patsy too good to pass up. Naïve, idealistic and a high school graduate, he was puddy in the conniving, scheming hands of America’s nascent deep state. America’s deep state evolved in stages, starting with the creation of corporate America’s monopolies in the 1880s. The FBI became the national police in 1908. The big banks pushed through the Federal Reserve Act in 1913, guaranteeing that America’s people would be indebted to private profiteers, in perpetuity. Wall Street’s fascist titans of capitalism tried to overthrow FDR in 1934, to install a dictatorship that would be aligned with Adolph Hitler. The coup ended in failure, but they and their military contractors infested all levels of government. The Office of Strategic Services (OSS), America’s first official espionage agency, was created in 1942.

All of these secretive centers of power coalesced around Truman the dupe, who took over when FDR died in 1945. At their bidding, he blissfully inked the National Security Act of 1947, on July 26th, which created the Central Intelligence Agency, the Joint Chiefs of Staff (JCS) and the National Security Council (NSC). Almost every one of the CIA’s founding members were from Wall Street. It has always been a business first. It is not hard to argue that this day in history was the beginning of the end of any pretense about the validity of the US Constitution and its Bill of Rights, with America’s ongoing, slow descent into a fascist police state.

Now, the deep state has selected Donald Trump over Hillary Clinton. Like Al Gore in 2000, who beat George W. Bush by 500,000 votes, Clinton trumped Trump by an even bigger margin in 2016, 700,000. Stealing the US presidential election is easy thanks to the Electoral College. America’s owners only have to rig the vote in about 12-15 key states.

Why did the Wall Street-Big Bank-Military-CIA choose Trump over Clinton? The answer is easy. Hillary would have been a continuation of the same neocon policies that have failed miserably, since 2000. After a brilliant run in the 1990s, of setting up stooge governments in Russia and the former Soviet republics, Vladimir Putin was elected Russia’s president. Soon thereafter, Iraq and Afghanistan devolved into carnage and chaos, although the CIA controls the crown jewel of the international criminal drug industry, by overseeing the sale of almost 7,000mt of opium for heroin production.

The beginning of the end of Uncle Sam’s color revolution government overthrow playbook was Ukraine. That genocidal debacle scared the people of Crimea to vote overwhelmingly to rejoin Russia, not to mention that the eastern third of the country is essentially under Russian control. To say that America’s Ukraine project is a colossal failure is a gross understatement. Russia & Co. keeps going from strength to strength, especially with its ever-increasing alliance with China. The final nail in the coffin of the neocon playbook was Hong Kong. Its Umbrella Revolution has also been a total bust. Time to tweak its global chaos and misery.

The US’s newest version of imperial tyranny, hybrid warfare, is working as planned in Brazil, yet socialist President Maduro is still in power in Venezuela and the masses are fighting back. Hybrid warfare has also fallen flat in Hong Kong. Why? Because Baba Beijing proactively cut it off at the knees, with the disqualification of two newly elected separatists, traitors in other words, in the local legislative council.

Not to mention that the US is getting its butt whipped by China in the South China Sea, while at the same time, two historically subservient Asian client states, the Philippines and Malaysia, are starting to push back very publicly, against the world’s Western bully. Iran and North Korea, two-thirds of Bush 43’s derisory “Axis of Evil”, along with Iraq, are standing proud and dignified, both still refreshingly free from Western dictatorship. Ditto Cuba, Ecuador and Bolivia in the Americas, and Eritrea in Africa.

In another sign that the West understands that it has exceeded its imperial overreach, Rwanda, South Africa, Gambia and now Russia have abandoned the International Criminal Court, the ICC, now being mocked as the International Caucasian Court, for its blatant racism and subservience to Eurangloland, based on the very biased and selective list of countries and leaders it has prosecuted.

So, Trump is the deep state’s chance to reassess, readjust and turn down the dial of increasingly failed imperial arrogance. Russia, China and Iran alone, are enough to cause even the most zealous imperial bigot in Washington to take pause. This ain’t the 1990s, baby. Time to visibly show just enough contrition and concern, to placate and bull dust the world’s peoples. This will allow our owners to buy time and keep their fingers on the levers of power and wealth. How? Trump will likely scale back the almost laughable demonization of Russia. Trump’s bosses will try to save face in another of the West’s gigantic snafus, Syria and Iraq, as well as cut a deal with ever-ascendant Baba Beijing.

Clearly, the more pragmatic elements of the deep state won this round. The other half of the deep state that lost is the ultra-ideological neocon crowd. It has been ready for nuclear Armageddon, going back to the 1940s-1950s, with plans to A- and H-bomb China, the Soviet Union, Cuba and every other communist state of any significance, humanity be damned. Cooler heads prevailed. But, it was that close.

There is an unstated irony playing out in all this. The extremist deep state has taken the hybrid warfare template and launched it on its very own power base, the United States. Million of dollars of NGO-plus-foundation money are pouring into Main Street to keep the fires of revenge fomenting against Trump and his supporters. As before the election, the rabid wing of the deep state has long controlled the mainstream media in America. The press will make sure that every paid protester who throws a rock or paints racist graffiti across America, will get prime time coverage, 24-7.

Incredibly, two deep state factions are at war with each other and its fallout is coming back home to haunt and torment America’s brainwashed, apathetic citizens. I don’t think I’ve ever seen a country that needs a serious revolution, so badly, as the utterly corrupt and dysfunctional United States is these days.

This may be the reason that Trump has threatened to do an investigation of the September 11, 2001 false flag extravaganza, which legitimized the extremist deep state’s commitment to control the world’s hydrocarbons, via a global war on Islam. Trump knows that it is the extremist elements of the deep state (including of course, Israel) who pulled off the 9/11 false flag, and that includes what is commonly called the “Bush-Clinton mafia”. Obama was their enabler for the last eight years, just to keep from joining JFK, RFK and MLK in America’s Annals of the Assassinated. The list is long, indeed.

But if Trump really did follow through with his threat, he would be throwing the extremist Bush-Clinton faction under their very own deep state bus. This could defuse a potential popular revolt on American streets and leave our Wall Street-Big Banks-Military-CIA owners still holding the deed to the country, and largely unscathed.