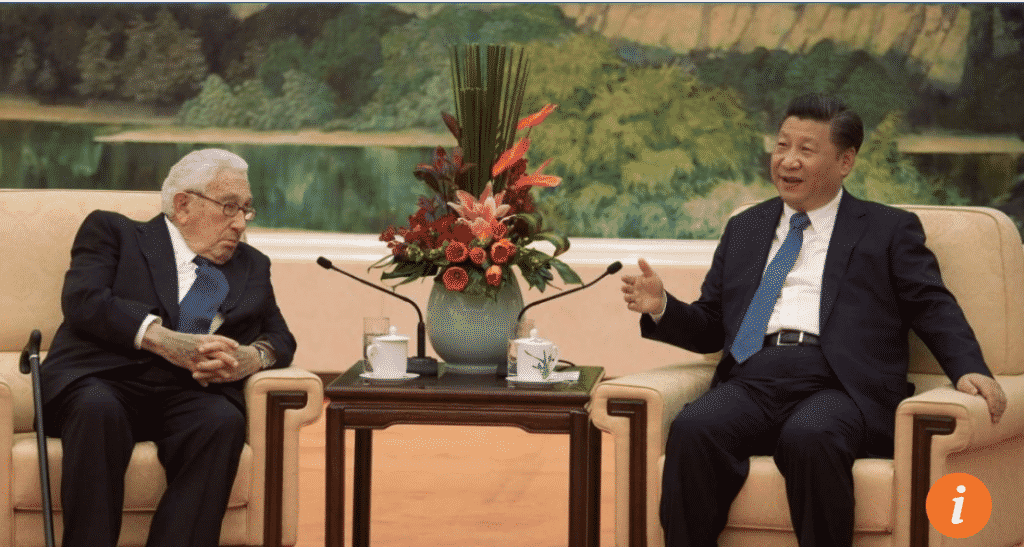 Any questions about differences between a Trump and Clinton II administration can be laid to rest this week. In astonishing fashion, President-Elect Donald Trump has conducted his advance work with dizzying effect.

Trump immediately confirmed he fully intends to pull out of the Darth Vaderesque and Orwellian named Transpacific Partnership (TPP), a Western empire confabulation meant to block China’s increasingly and historical leading role in its own backyard: East Asia.

As if to confirm this, on November 14th, Chinese president Xi Jinping (XJP) and Trump talked on the phone, to discuss future cooperation between the world’s two biggest economies, claiming mutual respect. Queen Clinton would already be moving little models of naval fleets to the South China Sea, with her shuffleboard stick, on the global strategy map in the Pentagon’s war room.

Trump also uncharacteristically met early on with Japanese Prime Minister Shinzo Abe, one of America’s two occupied, satrap Asian lapdogs (along with South Korea). He has threatened both of these countries that they better expect to pay cash on the barrelhead for the 80,000 American centurions camped out across their lands.

On November 15th, 2016, Trump and the hysterically demonized president of Russia, Vladimir Putin talked on the phone, discussing cooperation – heaven forbid! If Clinton had been elected, she’d be installing a “Press here to nuke Moscow” button in the Oval Office.

On November 27th, Trump and Malaysian Prime Minister Najib Razak had a chat on the telephone to discuss 2017. Malaysia has been demonized by the US and Israel for its three fearless “guilty” rulings of war crimes and crimes against humanity, in its own Kuala Lumpur War Crimes Commission, against Bush, Blair & Co., and the Zionist state. If you think there is no connection to these three rulings citing Western and Israeli genocide and the statistical improbability of three downed Malaysian airliners (MH370, MH17 and QZ8501) over nine months in 2014, then you are living in mainstream la-la land. Maybe Najib touched a nerve when he talked to Trump, because five days later, on December 1st, Trump said at a celebration rally in Ohio,

We will pursue a new foreign policy that finally learns from the mistakes of the past. We will stop looking to topple regimes and overthrow governments, folks…  [America’s international relations] goal is stability, not chaos because we wanna rebuild our country. http://www.washingtonexaminer.com/trumps-new-foreign-policy-we-will-stop-looking-to-topple-regimes/article/2608687

Trump simply and honestly admits that this is what the United States has been doing nonstop, since 1898, starting with the false flag USS Maine, to expand its empire from North America, to every inhabited continent on Planet Earth, yes, even including doormat “allies” Australia http://johnpilger.com/articles/the-forgotten-coup-how-america-and-britain-crushed-the-government-of-their-ally-australia  and Western Europe http://www.truthmove.org/content/operation-gladio/.

Trump is meeting with world leaders and talking with them on the phone without even consulting that bastion of Western empire and genocide, the Department of State (DOS), once Hillary Clinton’s fiefdom, no small coincidence. He has talked with Kazakhstan’s president Nursultan Nazarbayev, a strong ally of Russia and China and staunch member of the Shanghai Security Organization (SCO). He and Pakistani Prime Minister Nawaz Sharif talked, another strong ally of China, with Trump even proposing to visit the place. Barak Obama wouldn’t touch foot in Pakistan, undoubtedly worried about getting hit by American drones, that have killed and maimed untold thousands of innocent women, children, aged and youth, across the world.

Just this week, Trump invited president Rodrigo Duterte of the Philippines, to come visit him in Washington. Duterte has radically changed the geopolitical landscape in Asia and beyond, to the detriment of Western tyranny. http://chinarising.puntopress.com/2016/11/05/the-dark-skinned-exploited-peoples-of-the-world-are-calling-the-west-for-what-it-is-racist-china-rising-radio-sinoland-161105/.

The whole pattern to this seeming hectic schedule of contacts took shape yesterday, December 2nd, when Trump sent uber-Sino-schmoozer Henry Kissinger calling to Beijing, to meet with XJP to talk about bilateral relations. While not as momentous as Dr. K’s exploratory visit to China in 1971, to plan for President Nixon’s history changing meeting with Chairman Mao Zedong in 1972, this week is a not-so-unintentional, symbolic gesture for both presidents straddled across the Pacific. I think it’s safe to say that they will be meeting next year and hopefully cut a deal on trade, finance and the American generated brouhaha in the South China Sea http://chinarising.puntopress.com/2015/06/02/south-china-sea-brouhaha-down-dirty-44-days-radio-sinoland-15-5-17-2/.

On the same day, Taiwan’s president Tsai Ing-wen telephoned Trump to congratulate him on his victory. Without the supercilious hand of the DOS to interfere, he took the call, setting off a mini-tempest in a teacup on the Potomac. Why? Because the last US president to talk directly to a Taiwanese leader was Jimmy Carter, back in the 1970s. The Western mainstream media tried to make a big deal out of it, while Trump tweeted that “Interesting how the U.S. sells Taiwan billions of dollars of military equipment but I should not accept a congratulatory call”, a rationale which just makes plain sense. http://www.nbcnews.com/news/us-news/trump-departs-one-china-policy-speaks-taiwan-s-president-n691391. Baba Beijing (China’s leadership) took it in stride and the foreign ministry saved Trump’s face by declaring it was “a trick” by Taiwan http://en.people.cn/n3/2016/1203/c90000-9150383.html.  It’s already yesterday’s news over here.

The imperial mandarins in Hegemonyville, D.C. are apoplectic about Trump’s independent, free-of-the-Department-of-State geopolitics. http://www.cnn.com/2016/11/18/politics/donald-trump-world-leaders-calls/index.html and http://www.huffingtonpost.com/entry/trump-meeting-foreign-leader_us_582cecace4b030997bbd71fb. But here’s the deal. Iranian president Hassan Rouhani or North Korea’s Kim Jong-un, two-thirds of Bush 43’s derisory “Axis of Evil”, could call and I’d bet Trump would pick up the phone to see what they have to say. He’s a businessman at heart and it’s just not copacetic to refuse to talk to anyone about biz, even one’s competitors.

Donald Trump’s cabinet nominations are not encouraging. “Waterboard King” for the CIA, “KKK” for attorney general, “Mad Dog” for the Department of Defense, “Goldman Sachs” for Treasury, “litmus test anti-choice” for the Supreme Court, and others is enough to give even the most thick skinned pundit pause. But, we have to remind ourselves that these posts have to be approved by the U.S. Senate, which is more rightwing and neocon than Attila the Hun. The long and the short of it is he doesn’t have a lot of choice. He is smart enough to know that the last thing he needs is to not get his cabinet confirmed pronto, after January 20th, 2017, and get down to, well, business.

If Trump will work with Putin and Xi, pull out of the TPP and get the CIA/Gladio mafia to curtail its endless color revolutions and hybrid warfare – and do nothing else – then my vote for him was worth it. In the process, here’s to hoping he does not suffer the fate of John F. Kennedy, a palpable probability.

One thought on “Trump, Kissinger, Xi, Putin and Duterte: connecting the dots and what it means for all of us – China Rising Radio Sinoland 20161210”