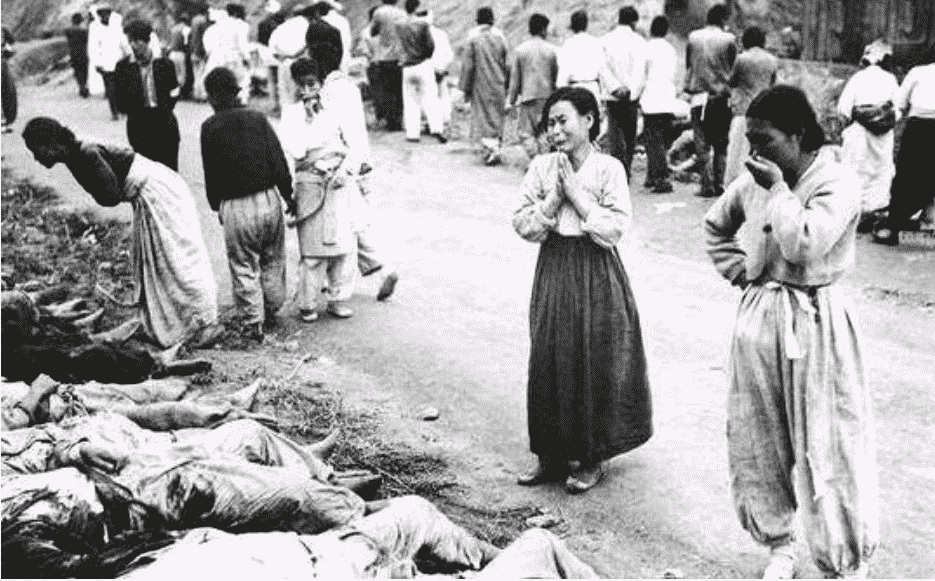 Pictured above: a photograph used in Chinese school books, showing grieving North Korean families mourning the death of their loved ones, at the onslaught of the world’s great imperial power, America. In fact, the official Chinese name for what Truman and the press coined “a police operation”, and later, “a limited war”, is “The war to resist United States aggression and to aid Korea”. The Chinese will never forget their heroic sacrifices to defeat Western imperialism. China’s 1.3 million volunteer troops, North Korea’s 266,000 and Russia’s 26,000 almost drove the US off the peninsula, cornering them around Pusan, and having proved their point, tactically retreated back to the original 38th parallel. With the US bringing in massive materiel and troops to avoid defeat, while killing millions with carpet bombing in the North (see below), the communists’ losses were staggering and it was time to bring it to an end. What China and Russia really needed and got was a buffer state to keep the US military from being installed right across their borders on the peninsula. They also hoped their resolve and sacrifice would chasten the US from future anti-communist follies, “teach ’em a lesson”. It didn’t work. Next up was the genocidal insanity of Vietnam and another three million innocent victims foisted on the vainglorious pyres the Western capitalist empire. From there, scroll through the newsreel to Syria today, among scores of others. (Image by 360.com)

As of today, Baba Beijing is continuing to pressure the US on THAAD: http://www.globaltimes.cn/content/1042556.shtml;

As well as sending an ominous message to both Kim and Trump: http://www.scmp.com/news/china/article/2087812/trigger-conflict-and-be-prepared-pay-price-chinas-foreign-minister-warns & https://www.rt.com/news/384755-north-korea-war-possible/;

While making a harmless symbolic protest to the North: http://www.presstv.com/Detail/2017/04/14/518018/Air-China-suspend-flights-North-Korea. North Korea’s airplanes will fly to and from Beijing fuller now.

DPRK is playing its Snidely Whiplash role to perfection: http://en.people.cn/n3/2017/0414/c90000-9202995.html & http://www.globaltimes.cn/content/1042547.shtml. Westerners love to tell me what a crazy crackpot Kim Jong-un is. Their gullibility proves the point: he is very smart, astute and knows exactly what he is doing. All great leaders are consummate actors and Kim loves cinema. Not to mention that he and his staff are in contact with Beijing 24/7.

This is all timed for three of the North’s biggest holidays, happening in quick succession in April:  https://en.wikipedia.org/wiki/Public_holidays_in_North_Korea. Echoes of the Tet Offensive or the Yom Kippur War?

Baba Beijing comments on the US’s use of its near-nuclear bomb in Afghanistan, with rational conclusions: http://www.globaltimes.cn/content/1042509.shtml. This just in and surely timed for similar reasons: http://www.presstv.com/Detail/2017/04/14/518059/USAF-F16-B61-Waugh.

One interesting possibility is this could all be staged to allow Trump and Kim to meet, and it may be one of the Citrus Summit quid pro quos. Trump is a Washington outsider who could pull this off: http://www.globaltimes.cn/content/1042534.shtml. The Bush-Clinton-Obama War Party would never consider it.

Is all this surreal Kabuki theatre, carefully planned out by Xi, Trump and Kim? Is a pending fake “Syrian airport bombing” false flag in the works, above the 38th parallel? Is this all to bring tensions to a fever pitch for a miraculous, cliffhanging, white knuckled US-Korean détente? Can Donald Trump empathize with the critical historical context of the Korean peninsula, through the eyes of the Chinese and North Koreans?

We must remember FDR’s refrain that everything happens at this level of (geo-) politics, at a particular time, for a reason, meaning prior knowledge and planning. Or, as John R. Hall detailed recently, we should adopt Hunter S. Thompson’s “180 Degree Theory”: everything (in politics) is exactly the opposite of what it appears to be http://www.greanvillepost.com/2017/02/06/doing-a-180-with-hunter-s-thompson/.

Fasten your seat belts, boys and girls, or if you prefer, put on your dancing shoes. Oh, joy! American B-26s in the process of razing another North Korean village into rubble. The US flattened the North with unrestrained carpet bombing. Three million Koreans, mostly in the North, died for their freedom from Western tyranny. Why? Because when the US realized that the free elections planned by the United Nations and America would mean victory for the communists, Uncle Sam quickly cut the country in half and installed a fascist dictator, Rhee Syng-man, south of the 38th parallel. This scenario played out exactly the same further south. The Vietnamese were prevented from voting the communists into power. Western democracy cannot be allowed, if it is going to offer a different vision of humankind, one of social equality and egalitarianism. (Image by 360.com)

Postscript:
The Korean War, a “limited war” for the US and UN forces, was for Koreans a total war. The human and material resources of North and South Korea were used to their utmost. The physical destruction and loss of life on both sides was almost beyond comprehension, but the North suffered the greater damage, due to American saturation bombing and the scorched-earth policy of the retreating UN forces. The US Air Force estimated that North Korea’s destruction was proportionately greater than that of Japan in the Second World War, where the US had turned 64 major cities to rubble and used the atomic bomb to destroy two others.  American planes dropped 635,000 tons of bombs on Korea —  that is, essentially on North Korea –including 32,557 tons of napalm, compared to 503,000 tons of bombs dropped in the entire Pacific theatre of World War II. The number of Korean dead, injured or missing by war’s end approached three million, ten percent of the overall population. The majority of those killed were in the North, which had half of the population of the South; although the DPRK does not have official figures, possibly twelve to fifteen percent of the population was killed in the war, a figure close to or surpassing the proportion of Soviet citizens killed in World War II. (http://apjjf.org/-Charles-K.-Armstrong/3460/article.html)

One thought on “The Xi-Trump-Kim waltz is twirling across the historical, geopolitical dance floor. China Rising Radio Sinoland 20170415”