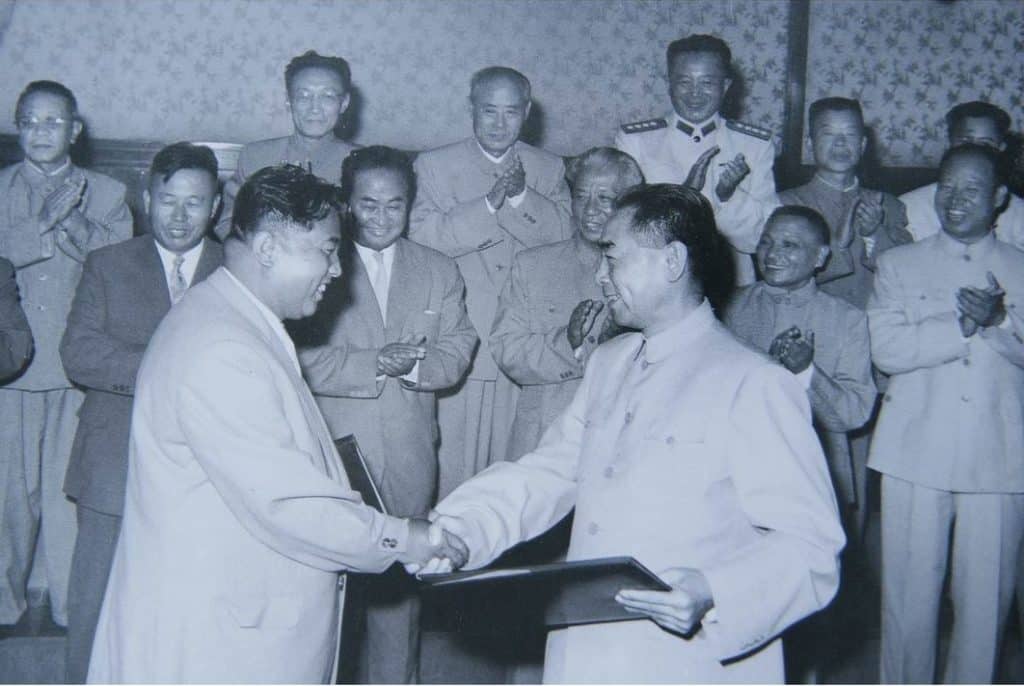 Pictured above: Kim Il Sung, left, and Zhou Enlai, right, were all smiles, having just signed their mutual defense treaty on July 11th, 1961 in Beijing. Does President Trump know about this incredibly important agreement? Look who’s right behind Zhou: Deng Xiaoping and Liu Shaoqi. A lot of history in this photo. (Image by Baidu)


In 1961, John F. Kennedy was starting to ramp up America’s presence in Vietnam. This, after standing up to the Joint Chiefs of Staff by refusing to authorize the CIA’s Bay of Pigs invasion fiasco to received air force support, starting on April 17, 1961. To paraphrase Donald Trump’s Vice President Mike Pence, it was time for JFK to show his “strength and resolve”, in the endless war against communism.

VP Pence was in South Korea this week, to pound on America’s King Kong chest. He snarled that Trump had already proved his mettle in Afghanistan (the MOAB bomb) and Syria (the bogus missile attack on an empty government air base), and is now threatening the North not to test the strength of the armed forces of the United States.

In May, 1961, Kennedy’s VP Lyndon B. Johnson, dutifully flew to Saigon. Sound familiar? He met with America’s fascist, puppet South Vietnamese dictator, President Diem, who was despised by almost every citizen under his brutal control. With a straight face, LBJ announced to the world that this butcher was the Winston Churchill of Asia. Given Churchill’s racist and genocidal policies in every British colony across the planet, the comparison was much closer to the truth than admitted by the obedient Western press.

JFK, playing his part, sent 400 Green Beret special forces to Vietnam, to train the South Vietnamese in anti-communist counter-insurgency. Time to wipe those evil Vietcong guerrillas off the face of the map. We know how that turned out. About a well as the Korean War, where in both imperial invasions, three million local “gooks” were slaughtered like rats, under an endless sky of carpet bombing. Served those dirty commies right. They had it coming, I tell ‘ya. Just ask John Wayne.

Mao Zedong and Kim Il Sung, China’s and North Korea’s leaders, respectively, knew exactly what this meant. In spite of giving Uncle Sam a humiliating beating during the Korean War, it was clear that the world’s self-appointed Robocop had not learned his lesson, and was going back for Southern seconds. Thus, there was the real possibility imperial America could come back to the Korean peninsula for an encore ass kicking.

It renews automatically every twenty years, unless cancelled by either party. Thus, it renewed in 1981 and is in full effect until 2021. Trump would have to wait and get reelected into his second term, crossing his fingers that either China or the DPRK called it quits. I wouldn’t hold my breath if I were Trump http://chinarising.puntopress.com/2016/03/10/china-north-korea-and-the-upcoming-international-sanctions-china-rising-radio-sinoland-16-3-10/.

For Trump and his gang of merry warrior pranksters, Article II is worth repeating:

Simply put, if the US or any other country attacks the North, China is obligated to defend it. That means war by any other name. Some Western pundits claim that China does not have to do this, due to Article I:

The Contracting Parties will continue to make every effort to safeguard the peace of Asia and the world and the security of all peoples.

Suggesting that this gives China wiggle room, since the North’s nuclear missile program does not safeguard peace in Asia. I would suggest just the opposite and Baba Beijing agrees with me. The DPRK’s nuclear threat is all that is keeping the tyrannical West from trying to turn the North into another Iraq, Afghanistan, Libya, Syria or Yemen. I’ll stop there, because the list is long. As explained, http://chinarising.puntopress.com/2016/03/10/china-north-korea-and-the-upcoming-international-sanctions-china-rising-radio-sinoland-16-3-10/, China is going to make sure its baby communist brother-in-arms is seen no harm, although that does not discount a possible media friendly, Syrian-like false flag missile attack, for China to help make Trump look like he is showing his imperial “strength and resolve” http://chinarising.puntopress.com/2017/04/13/is-trump-threatening-to-attack-north-korea-or-is-it-a-sino-us-nk-menage-a-trois-dance-china-rising-radio-sinoland-170413/ and

On November 1st, 1950, over one million volunteer Chinese began pouring over the North Korean border and dealt a devastating defeat to the United States, although, like Vietnam, losing is furiously denied and censored in the West. A fake “heroic, presidential” missile attack on an already vacated air base aside, like in Syria two weeks ago, Trump, his deranged generals and corporate owned Congressmen had better take a sobering look at history and remember what really happened in 1950 and 1961. Simply put, China and North Korea are not Grenada and Panama. After the humiliating ass-whippings that China, Russia, North Korea and North Vietnam meted out to Uncle Sam, you’d think that Donald Trump & Co. would know better than to come back for thirds. Imperial hubris knows no bounds for denial or historical revisionism. (Image by SCMP)