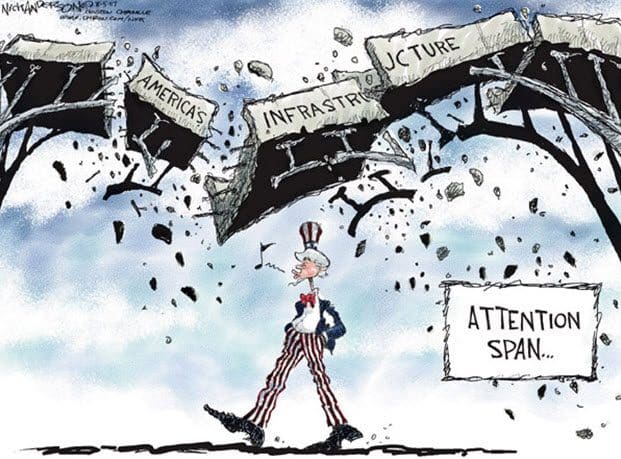 Pictured above: Rome lived upon its principal till ruin stared it in the face. Industry is the only true source of wealth, and there was no industry in Rome. By day the Ostia road was crowded with carts and muleteers, carrying to the great city the silks and spices of the East, the marble of Asia Minor, the timber of the Atlas, the grain of Africa and Egypt; and the carts brought out nothing but loads of dung. That was their return cargo. – “The Martyrdom of Man”, by Winwood Reade (1871)

[dropcap]I[/dropcap] was back in the United States for summer vacation, the first time there since 2014. After moving back to China in 2010 (my family and I lived and worked here, 1990-1997), this year’s US visit makes the third in seven years. The most shocking and revealing thing that just slaps me in the face is how quickly the physical and wireless infrastructure is becoming third world. With each visit back, it just keeps getting worse and worse, with no bottom in sight. Roads and bridges are antediluvian. Signage, sidewalks, city parks and the like are tired and stressed. Everywhere my family traveled, we saw boarded up, closed down businesses and abandoned residences. Many of the vehicles on the roads look like set pieces for a Mad Max movie (https://www.rottentomatoes.com/m/mad_max). Dilapidated and beat to hell, these rust buckets could never get a safety permit in China or Europe.

We spent five days in New York City and the subway system, while quite complete, has not had a serious makeover for decades. It looks and sounds like a Clockwork Orange (https://www.rottentomatoes.com/m/clockwork_orange/)scene from some futuristic, dystopian movie. On my one week metro pass it reminded me that in 2015 alone, hundreds of riders were hit by the subway cars and over 50 people died from getting hit or run over, just in one year. What the hell is that? What kind of society could tolerate such barbarity? OK, I know the answer, a capitalist one, but still, these numbers are huge for one metro system. If that happened in any of China’s dozens of subway systems, there would be loud protests on the streets or massive social media campaigns to shame the government to take action.

I paid $6.25 for the privilege of driving on the Indian Nation Turnpike in Oklahoma, down to visit an old friend in New Orleans. It is a paid toll road and it was in terrible shape. Bumpy, cracked up lanes, moonscape bridges and at some pay booths, no one to take your money. If you don’t have the correct bill, change or a credit card, then I guess you have to run the barrier and mail in the money later. Where is all that toll money going? And libertarians want to privatize all the roads. Well, there’s your proof of Uncle Sam’s dumbest idea: privatize everything in America. It wouldn’t make an ounce of difference, the country would still crumble to pieces, because since Reagan, taxes can never go up, only down.

Need I mention the lack of progress to rebuild the black wards in New Orleans? I know, because that is where I stayed during my visit there. If Chinese leaders flew over the devastation of 2005’s hurricane Katrina, like King George W. Bush did, and leave hundreds of thousands of people to fend for themselves, by relying on “market forces”, which was bandied about then as the panacea for all the misery and death, they would be violently deposed. The Chinese demand and get the best governed, best managed country in the world.

And then there is America’s Kafkaesque wireless and internet non-network. It’s balkanized, spotty, non-existent in too many places and you end up having to pay a shitload of money on a hotspot to get a halfway decent internet connection, above and beyond really pricey mobile phone plans. Either that or park outside a Starbucks or McDonald’s and hope their router is working. Even basic mobile phone service sucks, when you get out of the metro areas. It’s 2017, folks, and it’s all very embarrassing for the country that fancies itself as Planet Earth’s great technology darling. Get a life, wake up and smell the decrepitude.

And that brings us to China. When we got off the plane from Los Angeles, it was like walking through a time machine into a better, brighter future. Shenzhen is a beautiful, well organized, well planned metropolis of 14 million people (not 1.4, fourteen), with an extensive subway system, hundreds of bus lines, high speed train- and regional bus stations, tens of thousands of taxis, a dazzling international airport; excellent, well maintained, flower- and tree lined streets, roads and sidewalks; huge, numerous, public parks (free), stadiums, museums, concert halls, libraries, universities and public schools – with not a slum or shanty town in sight, not even a poor neighborhood.

Our standard of living and quality of life are ten times better here than anywhere in the United States, even if we were rich Americans.

Internet and mobile phone services are ubiquitous in China, not just in the cities, but in rural hinterlands too. I wrote about this in 44 Days Backpacking in China https://ganxy.com/i/88276/jeff-j-brown/44-days-backpacking-in-china-the-middle-kingdom-in-the-21st-century-with-the-united-states-europe-and-the-fate-of-the-world-in-its-looking-glass , when I traveled in deserted Western China. So, when was Shenzhen founded? In 1980, only 37 years ago! Before that, it was a sleepy fishing village of 2,000 people. Honest, no exaggeration. Only a centrally planned, communist country can be so efficient and well-managed.

And it’s not just Shenzhen. The Chinese people are the most plugged-in, internet and mobile savvy people of any big economy in the world. It’s not hard here, since mobility is everywhere and cheap to boot. Internet is free everywhere you go.

China has scores of national mobile phone brands. You can get an excellent, 4G Android smartphone, fully decked out, for under $150. My monthly 4G mobile service is $10.60/month for 2.76GB of 4G data and 150 minutes of national phone calls, no contract. I can add an extra gigabyte of data for $6.00, whenever I need to. But, we need a lot less data bandwidth in China than in the US, because free internet connections are everywhere. Text messages cost $0.015 each, but are rarely used, since China runs on free social media like Wechat, Sina Weibo, QQ, Renren and many others. The Chinese would hit the streets if they were asked to pay for ripoffs like Boingo and other usurious hotspot providers. This is a socialist country and citizens expect socialist public services.

The mobile lifestyle is exploding here. China is rapidly becoming a cashless society, paying for everything with their mobile phones, by using provider apps and QR codes, even with vending machines and street sellers. Some Westerners have a philosophical aversion to electronic money, as they should, since their banks are corrupt, criminal and rapacious. But, the Chinese trust their banks, since none of them are private. They are all state/people owned. Did you know the four biggest banks on Planet Earth are Chinese? They are all communist and incredibly profitable. I bank at two of them.

Below are growth trends just for Alibaba (https://www.alibaba.com/), which is like a hybrid Amazon+Paypal platform: Notice those are not annual growth numbers, but quarterly. When Alipay goes global, it will bury Paypal, thank you and finally. Alipay charges 0.25-0.40% transaction fees. Paypal charges ten times that amount.

Tencent (https://www.tencent.com/en-us/index.html), another mobile giant, which happens to be based right here in Shenzhen, is now ranked as the tenth most valuable global brand, thanks in large part to its wildly popular Wechat social media platform. You’ve probably never heard of Tencent, but when Wechat goes global, Whatsapp can kiss its ass goodbye. Wechat runs circles around it. Sorry my fellow Americans, but you are getting spotty, expensive internet and mobile service, and it does not seem to be getting any better, only worse. And please, don’t get me started on the roads and streets. It’s too darn depressing. This is my home now, Shenzhen, China. Nothing you see existed 37 years ago and now it’s a beautiful, green metropolis offering its 14 million citizens a high quality lifestyle. China has built thousands of towns and cities from the ground up, since liberation and the start of communist rule, in 1949.

Postscript: Here is a graphic that shows China is the world’s top large economy for ecommerce. Only South Korea is ahead: Postscript: no explanation needed. The full report is here: https://www.infrastructurereportcard.org/americas-grades/ 3 thoughts on “China is the most plugged-in big economy in the world, China Rising Radio Sinoland 20170824”