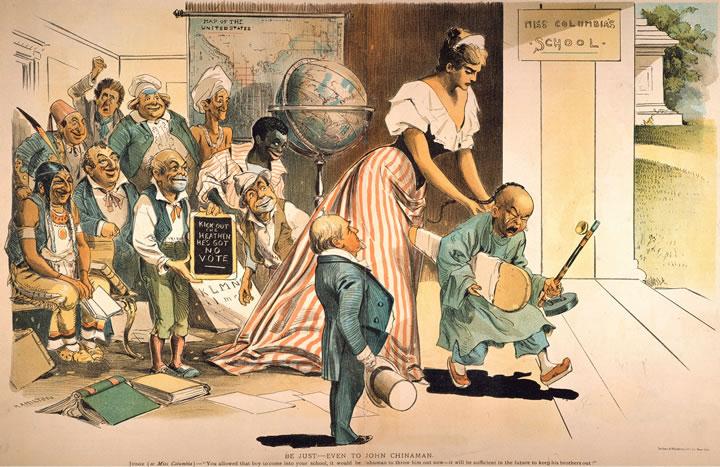 Above, entitled Be Just – Even to John Chinaman, this is one of thousands of racist political cartoons against the Chinese in the United States, especially with the passage of the 1882 Chinese Exclusion Act. It legalized the extermination of tens of thousands of Chinese, who were hunted down like dogs, shot, hung and scalped for state bounty (http://chinarising.puntopress.com/2018/01/06/slavs-and-the-yellow-peril-are-niggers-brutes-and-beasts-in-the-eyes-of-western-empire-china-rising-radio-sinoland/). All the racial stereotypes are there. John is crying like a baby, while carrying an ironing board, iron and an opium pipe: a cowardly drug addict who does women’s work.

The chalkboard says, “Kick out the heathen, he’s got no vote”. Heathen of course being a code word for subhuman, joining the pantheon of white racist epitaphs, like niggers, brutes, beasts, kaffirs and savages. They are used in every Western language. This, at Miss Columbia’s school, an allegory for the United States. Miss America seems to be in a decidedly foul mood. The hypocrisy of including a black man, Native American and other hated minorities in the background is especially bitter, since they did not have the vote either. But, it puts into perspective where the Chinese ranked on the race meter in the United States, until the 1940s.

[dropcap] I [/dropcap]t has been incredible to watch Western propaganda march in symphonic lockstep against China’s proposed changes to its national constitution, to allow the President and Vice President to serve more than two five-year terms, among about 25 other modifications. Even close to home, the South China Morning Post went all haywire at Baba Beijing using its very functional and participatory communist-socialist democracy to change its laws (http://www.scmp.com/news/china/diplomacy-defence/article/2134791/end-term-limits-top-may-be-start-global-backlash-china). Across the West, words like dictator and totalitarian are being bandied about with indignant self-righteousness: How dare the Chinese, they refuse to adopt our superior Western way of life (https://www.theguardian.com/world/2018/feb/26/xi-jinping-china-presidential-limit-scrap-dictator-for-life)! It depends on your definition of superior, of course, but the Chinese people definitely demur.

So called “China experts” are piling on with all kinds of doomsday the-sky-is-falling scenarios (https://www.nytimes.com/2018/02/25/world/asia/china-xi-jinping.html). President Xi Jinping is being portrayed as megalomaniac, power hungry tyrant. His 1.4 billion citizens respectfully disagree.

This whole Western charade exudes the worst hypocrisy and at its core, racism. When was the last time the mainstream media got into a snit because a Western country changed its laws? In 2001, where was Western propaganda when George W. Bush & Co. forever destroyed any semblance of the US Constitution conferring civil and human rights to its citizens, when a false flag 9/11 gun was held to the heads of every congressman and senator, to sign the Orwellian named “Patriot” Act – literally in the middle of the night, never having a chance to read it? America’s corporate whore media was right there, screaming, Sign it! Save us! Protect us (https://www.theodysseyonline.com/patriot-act)! This is how corrupt, Western “democracy” “works” (http://chinarising.puntopress.com/2018/01/11/chinas-public-social-credit-system-versus-the-wests-secret-panopticon-china-rising-radio-sinoland-180111/). It’s gangsterism, La Cosa Nostra.

Where have these media presstitutes been, while America’s owners passed the National Defense Authorization Act (NDAA), starting in 2012 (https://www.huffingtonpost.com/alton-lu/the-national-defense-auth_b_1180869.html), and with each annual renewal, pushes more fascist laws of the Patriot Act into hyperdrive (https://mic.com/articles/20835/why-the-ndaa-bill-is-even-scarier-than-you-thought#.Ufl2vfWGg)? Sign it! Save us! Protect us!, scream the West’s goose-stepping media.

The same thing happened in the UK, France and other Western countries, which used the US “Patriot” Act as a template to scare the shit out of their citizens and passed similar copycat laws. Numerous state-sponsored false flag “terrorist” events were staged to have the people, legislatures and parliaments begging to sign away their civil and human rights, to protect them from those e-v-i-l Muslims.

Yet, in China, here are 1.4 billion people in the world’s largest functioning, participatory democracy, fully engaged in the media and with their government, to discuss important changes to the people’s constitution. Was the “Patriot” Act offered to US citizens for consideration? Of course not. Yet China’s proposed constitutional changes, as well as all other laws and regulations under debate are everywhere in China’s media. Every citizen, using social media platforms, which is the vast majority of them, can make observations, suggestions and criticisms about these and all other law proposals, via government internet portals and phone applications. Millions do so, every day. As a resident of China, I also have the same rights and have done so (http://chinarising.puntopress.com/2018/01/20/headlines-say-it-all-baba-beijings-vision-leads-its-citizens-into-the-21st-century-china-rising-radio-sinoland-180121/). Not tech savvy? Then you can meet with your elected local representative, who lives in your area, or go to town hall, which I have also done so on more than one occasion.

I could also make comments about the law changes via these outreach services, if I chose to. In Beijing, every law proposal is posted online to solicit comments and suggestions from any foreign person, company, NGO, international organization, etc., that wishes to do so. Do Western countries allow the Chinese to comment on their pending legislation? Considering all the above, this is why China has the world’s most effective, vibrant, participatory democracy in the world (http://chinarising.puntopress.com/2018/01/30/60-seconds-over-sinoland-selling-breast-milk-as-public-protest-is-chinese-democracy-in-action-china-rising-radio-sinoland-180131/).

Today, maybe a million Chinese contacted their government to weigh in on the current proposed changes to the nation’s constitution. When was the last time you had direct, democratic input into laws being passed in your country? I rest my case.

This all boils down to pure and simple Western racism, a tired but genocidal refrain. Westerners are raised from the womb that they are preternaturally superior to all the non-Whites of the world, morally, spiritually, intellectually, culturally and technologically. I was talking to my Chinese colleagues this week about this and they are shocked by the venomous Western racism raising its predictable head to spew anti-Chinese hate around the world, simple because they are exercising their democratic rights as citizens. It’s comforting to them to know that there is at least one Westerner who understands.

China’s national constitution is one of the most important documents in the 20th century (http://chinarising.puntopress.com/2017/05/13/so-called-communist-china-by-jeff-j-brown-in-the-all-china-review/), but since China is communist-socialist, it is intentionally ignored in the West (http://chinarising.puntopress.com/2018/01/26/a-funny-thing-happened-in-the-library-today-china-rising-radio-sinoland-180126/). Worrisome for Western empire, more and more countries are taking notice of China’s firebrand, anti-colonial, anti-capitalist constitution.

This article is worth reading, as it shows the abuse Chinese take on a daily basis by racist Westerners, who are oblivious to what they do and say (http://chinarising.puntopress.com/2017/11/10/all-the-chinese-people-want-is-respect-aretha-franklin-diplomacy-on-china-rising-radio-sinoland-171110/). Here is an easy five-minute podcast I did about Western empire and racism (http://chinarising.puntopress.com/2016/03/27/the-cycle-of-western-empire-a-china-rising-radio-sinoland-modern-day-math-lesson/). If you really want to get into the West’s racist heart of darkness, this article is one of the most important I’ve ever written. Sobering food for thought, but necessary to pierce the veil of Western propaganda (http://chinarising.puntopress.com/2018/01/06/slavs-and-the-yellow-peril-are-niggers-brutes-and-beasts-in-the-eyes-of-western-empire-china-rising-radio-sinoland/).

Finally, Godfree Roberts, who has been on my show many times, just did an excellent analysis of the law change proposals and their background and inspiration (http://www.greanvillepost.com/2018/02/25/why-does-the-cpc-want-to-remove-the-expression-that-the-president-and-vice-president-of-the-peoples-republic-of-china-shall-serve-no-more-than-two-consecutive-terms-from-the-countrys-constitut/).